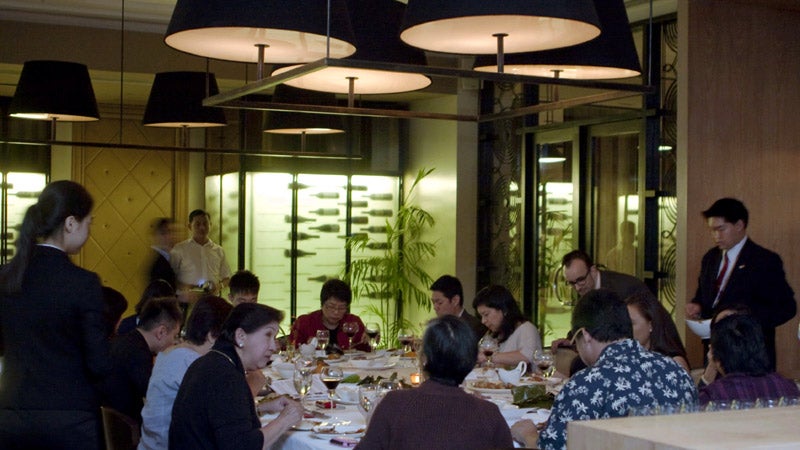 The interiors are posh. It’s like walking into the signature restaurant of a five-star hotel. White linen on the tables, very French. Subdued hues of camel. Mirrors to expand the room. A Frenchman greets you at the door. “Table for?” One. “This way, mademoiselle.” Mademoiselle. Made me wish I’d worn a little black dress and pearl earrings instead of skinny jeans and a manang blouse. Turns out he is the French sommelier and general manager of the restaurant, Gerald Savigny. Oui, Monsieur, read my thought bubble. Je ne peux pas parler français, mais ô combien je voudrais pouvoir!

Once I was seated, a young man in a preppy jacket offered me a menu and was soon reciting the day’s specials. He forgot a line, giggled a little, then composed himself and continued. Young man, maybe 18 or 19, clearly not hired help. Superb English and an eagerness to accommodate. He is a sophomore at Enderun Colleges, which houses Restaurant 101. I got a kick out of this concept of having rich kids, who probably have at least four maids at home, allowing guests to tell them to go fetch.

“And why is your chocolate cake called Louis XV?” I challenge him at the end of the meal, summoning my best Miss Tapia cum Mary Poppins voice and accent, as I inquired about the exquisite, to-die-for signature chocolate cake of the restaurant. Poor kid failed my pop quiz. He SOS’d to his classmate, a lovely young girl in a preppy short skirt reminiscent of “Hit Me Baby One More Time.” She explained: “The original restaurant of Alain Ducasse in Monaco was named Louis XV. Alain Ducasse Foundation is a partner of Enderun. The chocolate cake was named after his restaurant.” Bingo! Britney will graduate with honors.

Restaurant 101 is what is called an “application restaurant.” MENU had featured it in 2007 when it was still a tiny hub in Ortigas. Today it is at least three times the original size and used invariably for highbrow functions. Its current executive chef is, like the sommelier, a Frenchman, Nicolas Cantrel who has developed a new menu for the restaurant.

If you are a TV addict, you might be familiar with Cantrel from the show “Iron Chef America,” where he defeated Chef Marc Forgione in Battle Gruyere Cheese. His resumé includes working in the kitchens of Alain Ducasse, at La Relais du Parc (Paris), La Bastide de Moustiers (Moustiers Sainte Marie), the three-Michelin-star Le Louis XV (Monaco), Aux Lyonnais (Paris), and Mix in New York.

I learn that at Enderun, students are taught the “Alain Ducasse philosophy,” i.e., “applying the best techniques to the freshest ingredients, cooked with the passion and attention to detail that are the hallmarks of the great chefs.”  This quest for perfection shows at 101, even if it’s more quest than perfection—the people attending to you are students, after all. During a lunch, a mentor suddenly stuck his neck into our booth after a student had served me my coffee, to sternly remind the aspiring hotelier, “The handle must be at 10 o’clock.” (Or was it 3 o’clock?). After which he rotated my cup’s little arm toward the right direction.

The cuisine, however, is almost always a pleasant experience. French techniques are heavily applied in the cooking and presentation of the dishes but ingredients are punctuated with flavors of Asia. Pan fried goose liver is served with a Chanterelle cream. In the crab bisque swims lobster ravioli but the soup also has coriander and ginger. Pork belly uses Kurobuta pork then served with adobo-flavored rice. Roasted saddle of lamb comes with a basil-garlic stuffing. The flavors vary but the technique is always excellent.

Truth be told, Enderun does not own a monopoly of this market, to the benefit of our youth. Choices abound in today’s educational landscape, at least for those who can afford it. Nearby, there is the International School of Culinary and Hospitality Management (ISCAHM) founded by Chef Norbert Gandler, whose credentials crosses continents, but is most notable for nurturing the talent of then aspiring chefs Ariel Manuel and Tonyboy Escalante during his stay at the Mandarin Oriental Manila. (Today, Manuel’s Lolo Dad’s and Escalante’s Antonio’s are consistently among the top five restaurants in the Philippines, if not in Asia.) But ISCAHM only offers diploma courses in the culinary arts.

The other school that offers a degree course in hospitality management is the dynamic De La Salle University’s College of St. Benilde, where one can graduate with a Bachelor of Science in Hotel, Restaurant and Institution Management with a Culinary Arts track. Its culinary school has partnered with Institut Vatel in France.

But Enderun’s sprawling 1.7 hectare campus is devoted solely to the hospitality and culinary missions, using state of the art “labs” where students learn kitchen techniques. They are also given the opportunity to intern at some of the best restaurants in the world. For Jessa Jastrzemski, a senior majoring in Culinary Arts, the internship was at no less than Chef Heston Blumenthal’s Fat Duck in London, awarded three Michelin stars, named restaurant of the year, Best Restaurant in the World and Best Restaurant in the UK.

Tuition fees, though, are steep. A semester may range from P150,000 to P180,000 depending on the choice of classes.  But the education is what Chef Cheong Yan See, Enderun culinary director, calls holistic. “The bench mark here is not only the local colleges or universities but also those abroad. The hardware and software, i.e., faculty, curriculum and facilities have to be the best.  Students and parents know that it is quality that they are paying for,” he explains. Indeed, one of the first things you notice during a quick tour of the school are the diversity of nationalities, with students across Asia flying to the Philippines to study here.

Fortunately, even the less loaded dreamers can study at Enderun. According to Chef See, 25 percent of the school’s student body enjoy some form of scholarship or financial aid. “One of the most sought-after financial aid programs is the Work-Study Program where a student renders part-time service within the campus to earn as much as P50,000 a year, which is deducted from the tuition. A student could be assigned to various departments such as the kitchen, F&B service at Restaurant 101 or the cafeteria, concierge, peer tutorials, library, career services and other administrative areas.  Not only do students benefit financially, they also gain from the actual work experience.”

The training in the kitchen labs is also rigid. Jose Felipe Gaerlan, a merit scholar who will be leaving this November for Paris to intern at Alain Ducasse Formation Center, shares that students have to be at their kitchen labs at 7:30 a.m. because the doors are closed by then. When there is volunteer work for VIP events at Restaurant 101, they are involved in preparations two days ahead of the event. They also serve at the restaurant until it closes around midnight.

The result, at least for this transient witness and restaurant guest, is an enjoyable if not memorable dining experience. Delicious, creative recipes; conversant and knowledgeable servers; recommendable wine pairing, and that vibe… there is nothing more energizing than the eager mind of the young dreamer. No need for that excellent coffee served in a cup whose handle faces 3 o’clock. Or was it 10 o’clock? •