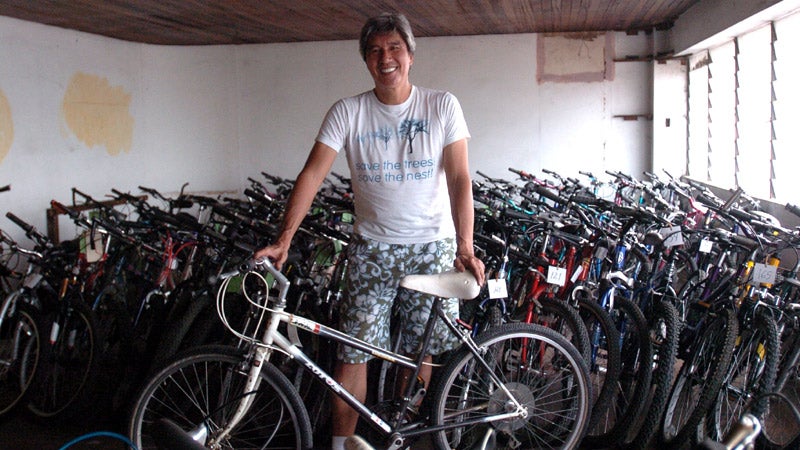 When there's a wheel: Uichico with donated bikes. (top photo) Volunteers repair and spruce up bikes stored in warehouse photos by rodel rotoni

On the right track

With the sun not even warm on their necks, countless Filipino children begin trekking out of their homes just past the crack of dawn. They know the lonely road ahead stretches for three, sometimes four, kilometers and often on dangerous terrain, but it is the only way they can get to the nearest public school. And hopefully – away from their impoverished lot.

This was what Joel Uichico realized when he saw the children walking the fields in the town of Baclayon, Bohol. A sportsman and agent of change, Uichico had devoted years developing eco-tourism in Bohol through his and girlfriend Bea Zobel Jr.’s Baclayon Recreational and Aquatic Activities (BRAABO) foundation. Among BRAABO’s projects is the sand buggy trip for tourists. The buggy trips head out in the morning or early in the afternoon-which is when they encounter the children.

Recalls Uichico:  “The highlight of the trip was when the tourists would pass the walking kids and they would wave, and the visitors would stop and have their pictures taken with the kids.” Uichico recalls. The children were off to school. It was May of 2010.

“That aroused my interest, wondering how far they walked,” he says. Then he wondered about dropout rates and absences caused by the long daily trek. “There was an easy solution and it was a no-brainer: I think I can get them bicycles.”

Uichico had heard of organizations that gave away bikes to poor kids in other parts of the world and set about finding them. Thanks to a cousin, Boston-based Jojo Grant, he found an American charity called Bikes for the World.

Founded in 2005, Bikes for the World collects old bicycles and donates them to needy children around the globe. Already, they have distributed over 20,000 bikes in Africa, North, South and Central America though they had yet to do so in Asia.

It would take Uichico several meetings with the Baltimore, Maryland-based group and collaboration with Fil-Am Joel Esguerra before he found himself in front of a container van full of donated bikes in the port of Baltimore. The 556 bicycles were finally headed for the Philippines, wheeling in Uichico’s plans for a better future for thousands of marginalized schoolchildren.

Ironically, Uichico’s relationship with bikes did not have auspicious beginnings.  As a child, Joel Floro Uichico was only allowed to bike within the Floro home in New Manila. Once he dared ride beyond that and got home to a huge spanking, he recalls. Fortunately, motorcycles soon took his mind off bikes.

With Bikes for the Philippines bringing back his early love for bicycles, Uichico buckled down to work and looked for partners to take care of the incidental expenses that went with shipping used bikes to the country. Baclayon’s Peacock Garden Luxury Hotel and Spa would take care of the freight cost, friends from his La Salle days paid for helmets, and with the help of fellow scuba diver Boy Siojo, he put together a like-minded group of bicycle advocates.  Now to get the bikes ride-ready…

The donated bikes were in various states of disrepair, but Uichico soon found enough volunteers willing to donate time and spare parts to fix the bikes.  Others donated cash. He also found willing donors for food and beverages such as People’s Palace and Margarita Fores, Coca-Cola and Rainforest.  Thanks to sister-in-law Marisun Laurel, he also found an ideal warehouse for storing the offloaded bikes: an empty warehouse in Merville, Parañaque belonging to Marisun’s family.

Today, the warehouse is packed full of bikes of all sizes and colors, with half-finished pieces stacked in corners. Near a long bank of windows, a group of volunteers put finishing touches on a row of mountain bikes up on stands. “Aside from a few specialized mechanics, the vast majority of our people are volunteers,” says Uichico. He leads us to another room, where 306 repaired and ride-ready bicycles are ready for delivery. The bikes actually look brand new. The plan now is to send them to Bohol.

Considering the difficulty involved with matching the right-sized bike to the recipients’ physique and height, as well as the condition of the roads, Bikes for the Philippines decided to link up with an innovative program in Baclayon called the Alternative Learning System (ALS), which has adult students going to school and taking a non-mainstream curriculum. “They’re bigger, stronger and can already handle bikes,” Uichico explains. Thirty ALS students are set to receive the bikes but first they and their families are interviewed and briefed on the memorandum of agreement.

“Basically the bikes will be on loan until the students graduate,” Uichico says. If the ALS students stay in school and finish, they keep the bikes for good. They are barred from selling the bikes. Additionally, Bikes for the Philippines intends to bring mechanics to train the ALS students in bike maintenance and repair to help them possibly earn a living. Bikes for the Philippines will also provide for the special tools and equipment they need to get started. In late October, they shipped over 100 bikes to Bohol even though the program will be formally launched in December.

After that, Bikes for the Philippines intends to give the next batch of bicycles to Baclayon’s fourth year high school students, then the third year students and so on.  “By then, the ALS students can act as big brothers to these people,” Uichico says, adding that 50 bikes are tagged for Habitat for Humanity while others may be sent to needy parties as far off as Loon or Calatagan, Batangas.

The next phase will be recording the changes, if any, that the bikes would have on the performance of its recipients-to see if the dropout rate or the absences go down. Bikes for the Philippines is working with two foundations to monitor the recipients’ educational performance and economic status over the next three years.

Uichico is now looking for others who can help ship the bikes, such as a freight forwarder. Another concern has been acquiring good footwear for the children, as the program disallows the use of flip-flops or tsinelas while biking for safety’s sake. “But since the children are poor and might not be able to afford shoes, we’re doing a collection drive for shoes. That’s the next project where people can help,” he says. Outdoor retailer ROX has agreed to act as a collection center for shoes.  There are also plans for a big bike ride for the cause. “You pay a little something and it goes towards the cost of freight or to defer expenses,” says Uichico.

Seen from a distance, Bikes for the Philippines fits Uichico’s three-pronged plan for change. It helps the environment (it promotes clean air aside from recycling the bikes), promotes entrepreneurship (the training the students get toward a possible career in bike repair as well as lending bikes out to tourists), and contributes to education (the bikes help the students get to school sooner and more often).

Uichico can’t help but be amazed at the possible changes one bike can have. A bike can, theoretically, cut down the students’ trekking time to and from school, giving them more time to help out at home and work on their lessons.

Uichico gets emotional when he thinks about how far the bikes have come. He is particularly inspired by how the volunteers have freely given their time. “I get really touched by seeing rich and poor come together for the sake of public school children. We’re sharing; we get our hands dirty. We’re helping people we don’t know.”

The whole experience has accompanied Uichico’s own transformation into an avid biker. A former varsity basketball player as well as a devoted runner, he now savors taking to the road on two wheels, powered only by a person. “This is a new thing I can do with my kids and Bea.” He dreams of being able to bring all the volunteers to Bohol and have them ride with the kids on their way to school. “I had the idea, but they were the ones who worked on the bikes.”

The wheels turn and the project grows. A world away in the United States, a second container van awaits. “We’re already working on the next shipment,” he says. Ultimately, Uichico intends for Bikes for the Philippines to live up to its name and send bikes all over the country “It has to be national because the problem is national. Walking to school is a problem in the provinces,” he explains, as the sun begins to dip behind him and another school day ends. •

For inquiries, please join  the Bikes for the Philippines on Facebook or e-mail [email protected]