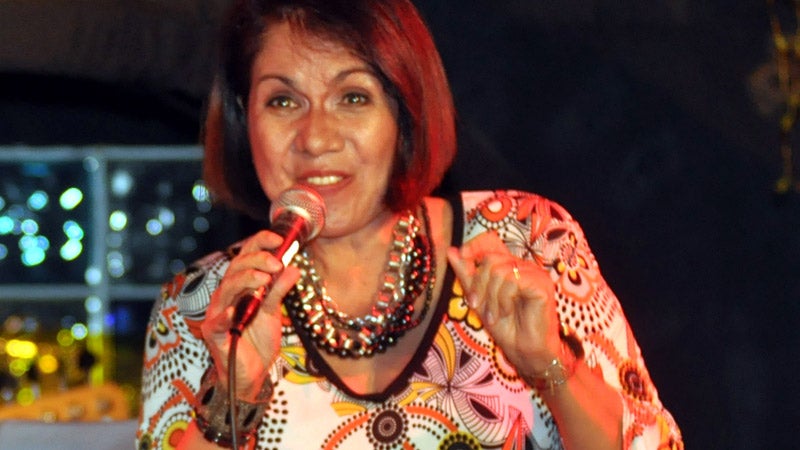 The song request was for “I Will Survive,” and for the first time in 35 years as a professional singer, Marilou “Uditte” Cayton was dumfounded.

It’s not that she had forgotten the words.  As an original member of both the Music Making Co. and the Replay Band, she must have sung “I Will Survive” hundreds of times.

But this wasn’t just another gig.

This was a cremation, and the bereaved wanted to hear “I Will Survive” while their loved one – a beloved wife who had left a family behind – was being rolled into the crematorium.

“Oh my Lord!” thought Cayton.  But finally, she agreed, after insisting that she inform those gathered that it was the family’s wish, not hers.

Afterward, she was glad she did. If some of those in attendance thought a disco song wasn’t appropriate for a cremation, they kept it to themselves.  But the family members were grateful to Cayton for helping them grieve – and survive – a deep personal loss.

“I felt good about it,” she says.  “I feel that I help people go through the grieving process, and often they tell me ’thanks for making it easier for us to accept.’”

Cayton is – as far as this writer knows – the country’s only singing memorial host. Others make a living as a wedding singer; she does it as a funeral singer.

It’s a relatively new concept, she explains.  The memorial host is like an emcee – a master of ceremonies – presiding over the final funeral rites for the departed.  He or she oversees the services, makes sure everything goes smoothly, and that the wishes of the family for their final farewell are met, whether it involves a solemn prayer, the release of butterflies, or in some exceptional cases, singing “I Will Survive.”

A Sociology major from St. Theresa’s College, Cayton has been performing professionally since 1976 when she joined the Music Making Co., which became one of Manila’s hottest showbands for decades. Their star rose even higher when comedian Gary Lising took the band under his wing, introducing them to television through the comedy show “Champoy.”  After a hiatus, during which she went to the US to do production work, got married and eventually separated, Cayton returned to join another showband, the Replay Band, when “retro” sounds became popular in the local club scene.  A couple of years ago, she returned to the Music Making Co. when the band re-formed.  They have been regular weekly performers at RJ Bistro since, doing mostly Manhattan Transfer and other vocal jazz numbers.

Last year, she was approached by fellow alumnae who happened to work for the Arlington chain of funeral homes after they saw her perform at an STC reunion.   They asked her if she wanted to try memorial hosting.

They did not have to ask twice. In the last five years, Cayton had spent most of her energies being the primary caregiver for her aging parents until their deaths. “I got so used to taking care of sick people and seeing them pass away that I lost the fear and aversion to death,” she says.

She signed on to perform memorial hosting services, specializing in cremations, which have become more accepted in recent years.  She’s not the only memorial host for Arlington, and other funeral homes have their own counterparts, but Cayton is the only one who’s also a professional singer. “It’s good to know that my profession all my life can also be used to help people,” she says.

Although the typical cremation service only last about 30 minutes, it takes a lot of preparation. “I usually talk to the family first about the deceased, how they passed on, their quirks, little stories about them – everything important about the departed,” she says.  “It’s important for me to get a sense of the person and his or her family.  There have been one or two cremations where I wasn’t able to do interviews with the family, and they were so different.  There was no connection.  I felt that I didn’t have the right to do the rite because I didn’t really know them.”

As in other Filipino social rituals, music plays an important role.

“I ask the family for the deceased’s favorite songs, and if I know the songs, I sing them,” says Cayton.  “If I’m not familiar with them, we just play the songs.  It’s important that they hear the exact same version, the way they remember it.  The memories just come flooding back.”

Is there a “Cremation’s Greatest Hits”?

Perennial favorites include the Tagalog standards “Ikaw” and “Hindi Kita Malilimutan.”  Death at an early age calls for songs such as Michael Jackson’s “Gone Too Soon,” or for the very young departed “Precious Child.” Hard is the heart who isn’t moved to tears when “Ugoy ng Duyan” is sung for a mother who has passed, or “Oh My Papa” or “Dancing With My Father” for dad.

Not surprisingly, people request songs from their youth. The Carpenters’ “You” is a favorite among baby boomers, and slightly older folk still swoon over Sinatra, until the very end.

Quite often the mood is solemn, as the occasion dictates.  But people grieve in different ways, and some families don’t want the proceedings to be any sadder than it already is.  Hence upbeat final numbers like “I Will Survive.”  One family even held a trivia contest with questions about the departed – complete with prizes – while waiting for their loved ones’ ashes.

Cayton says with more and more people accepting cremation as an alternative to the more traditional interment, her schedule can sometimes be hectic, with up to three cremations a day.  Being around so much strong emotion can take its psychic toll.

“I couldn’t do this for my parents, so for me, whenever I do these rites, I feel like I’m doing this for my mother and my father because I took care of them until the end and I don’t have a family of my own, ” she says.

“It can be emotionally draining, but I’ve learned to deal with it.  After every cremation rite, especially if I have to do two or more in a day, I have to take some time to be with myself.  When I leave there’s a little grieving period, so the next day I need time to recharge, to do something happy.  I need to unload and go to happy places.”

The rewards are well worth the effort, however. “When we do the rites, it makes it easier for the family to accept a loved one’s passing,” she says.  “It makes me feel good to know that I’ve been a comfort to them.”

Surprisingly, she says being around death all the time hasn’t made her morbid.   If anything, it’s been richly rewarding.  It’s definitely a different world, but memorial hosts and funeral directors are a surprisingly happy bunch, she says.

“I’ve learned to live every day to the fullest, and that nobody can take anything with them to their graves,” she says.  “Someday, we will all have to go.  My prayer now is ’Lord, You’ve brought me to this work.  Please don’t take me yet because people might think it’s because of doing this work.  You and I are on a mission.”

She adds: “This is more than just a gig; it’s a calling.”