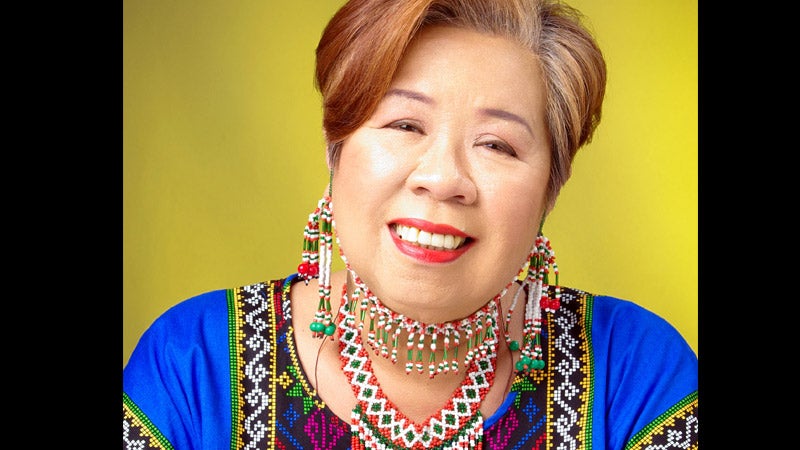 Priest claims, “She has already died!”

You could say this woman is “tough as leather,” the material she uses to accent her internationally acclaimed Cora Jacobs handbags made of native palm.  With her international experience in designing for the great fashion houses of Yves Saint Laurent, Christian Dior and Givenchy, she has become known as the pioneer of Philippine handbag design. Cora Jacob rode the swell of business success in the 1980s but has also weathered major storms and upheavals in her incredibly colorful life.

Almost two decades into her business, Cora was forced to close shop because of failing health.  Of her healing journey, Cora writes:

“I remember 1997 as a very stressful period in my life. I was on top of everything-overseeing manufacturing, distribution and retailing. Eventually, the stress took a toll on my health. I was diabetic and losing my eyesight. There was no way I could continue in that way. I had a thousand workers in my factory and some more subcontractors in the depressed areas of Manila. I simply paid everybody and told them I could not support them anymore.

“One afternoon, Dr. Celina Guerrero and her husband, an oncologist practicing in Hawaii, dropped by to introduce their friend, Sr. Sonia. I was to check in at the hospital for surgery on my carotid-a bad case of occlusion. Forthwith we prayed for courage.

“My luggage had been packed for the hospital, but Sr. Sonia convinced me to go see a clairvoyant, Fr. Efren Borromeo in a small chapel in Fairview.  A second opinion would do no harm so my husband and I decided to give it a try.

“Christmas season that was. The ride to Fairview took us a couple of hours. Fr. Efren was in the confessional. Ah, so Sister wanted me to go to confession before the hospital procedures!

“When we saw the last penitent signing himself with the cross, we dashed to the priest as fast as our feet could take us. After we had introduced ourselves, Fr. Efren blurted by way of greeting, ’What business have you got going around like this?!’ He put his hand over my eyes, then my neck.

“Right after our confessions, my husband got exceedingly perplexed when Fr. Efren whispered to him privately: ’Do you know that your wife has already died?’  To me, he said, ’Cora, you have yet a mission in this new life given to you.’

“To my surprise, I in turn could see through him. ’Something seems to be wrong with your stomach, Father.’ Laughing cheerily, Fr. Efren said, ’Yes, this is where all the negative energies of healees go.’

“Three days after this strange encounter, I went for an angiogram. It confirmed that I had total occlusion, and three main arteries were blocked. The doctors were extremely puzzled. Why was I walking about when clinically I should be either dead or comatose and a vegetable?

“I stayed 10 days in the hospital. To this day, no one can explain how I can still do all the things I’ve been doing-and more. I spent the next two years following Fr. Efren around in his mission.  I even spent a whole year teaching inmates at a jail how to make waste baskets and other home accessories.”

Cora, on the basis of laboratory findings, technically remains blind. Yet for more than 10 years now, she has been designing bags and accessories which she showcases in major cities of Europe and the United States.  Amazingly, she not only continues her artistic endeavors but is also able to read auras-a gift she claims she has discovered during her first session with Fr. Momoy.  “Payback time!” she terms it, adding, “I can’t believe that indeed I am now on the mission band of Fr. Efren!”

Plagued with diabetes and a kidney problem, Cora remains undaunted. She has worked her way back to the world of design, feeling refreshed, strong and fearless. “Two years of blindness saw the strengthening of my relationship with the Lord. With that, I have no more fears. I went through great failures so I have learned my lessons and managed to get up again.  I feel I’m starting my life again, except now I have the wisdom of past experiences and a greater faith in God’s will.”