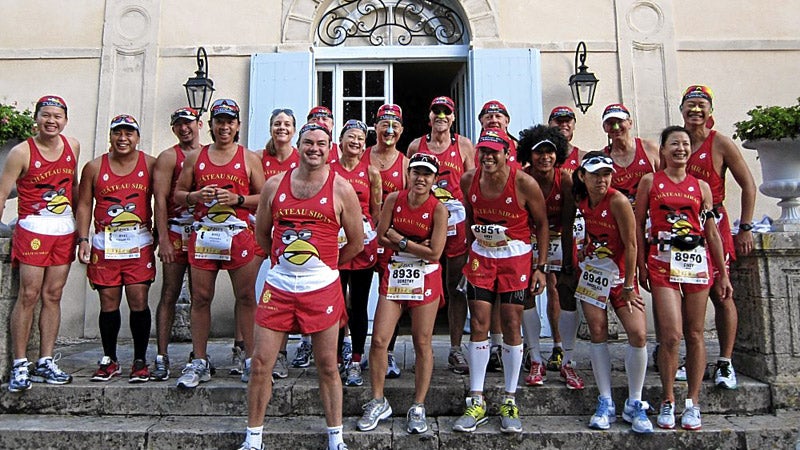 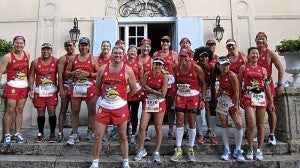 It’s the ultimate marathon in the world, a dream race that combines food, drinks and running. Welcome to Marathon du Medoc!

Instead of quaffing water or energy drinks at the aid stations, runners are served wine in real glasses and eat-all-you-can freshly shucked oysters, various fromage (cheese), entrecote steak and ice cream. That’s how this race has become the world’s longest marathon.  The goal isn’t to eat up the 42 kilometers in record time, but to prolong the time on the race course by dawdling at each food and wine station, and somehow wind your way to the finish line standing up.

The prize: one’s weight in wine.  The time to beat is 2h 30m, but those who make the 6h 30m cut-off time still get to bring home a bottle of very decent Bordeaux.

Spiced with fun and conviviality, Medoc runners are decked out in costume according to an annual theme.  The theme for this 27th Marathon du Medoc was Animals, with Filipino participants representing Chateau Siran resplendent in their red “Angry Birds” shirts, from their favorite Apple game. But the group looked tame compared to the goofy costumes that some 8,000 runners had put on for the September 10 race in the quiet town of Paulliac, in the region of Bordeaux.  The spectacle ranged from “equipment heavy” runners lugging around giant stuffed animals in wheeled cages, to barely-there fur costumes.

Historic and romantic, the region of Bordeaux is the perfect setting for a food and wine connoisseur. The region is considered ground zero for red wine, with the prestigious labels assuring even the uninitiated that they are drinking only the very best.  The most famous of these are the Chateaus Margaux, Lafite, LaTour, Mouton Rothchild and Haut Brion. With the prices that key vintages of these bottles can command at auctions, one almost needs a degree in enology to uncork one.

I came to run this race as a member of Team Chateau Siran not because I could tell a good cabernet from a bad one, but because vineyard owner Edouard Miailhe had decided that this would be the year that Chateau Siran would give chase to the other chateaus in Bordeaux. He then recruited a team of 19, mostly from the Philippines and HK.  Captained by triathlete Jay Sy and coached by Rio de la Cruz, my fellow teammates were Kim Atienza, Andy Aguila, Matthew Nyren, Don Santos, Dorothy Santos, Vic Santos and Michelle Chan. 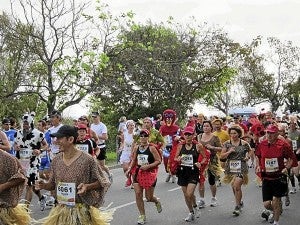 TV host and weatherman Kim Atienza had included running as part of his newfound healthier lifestyle after suffering a stroke last year.  With six months’ worth of running under his belt, he came to Medoc to celebrate his new life and his 10th year wedding anniversary to his beautiful wife Fely.

Says Kim: “I was running with the Lord and thanking Him for everything He has given me.” His wife was on hand to cheer him on through the course and even ran the last 200 meters of the marathon.  In true Francophile fashion, the couple ended the race with a French kiss.

To the serious long-time drinkers (a.k.a. the hollow legged “Honkies” or HK racers), whose pre-race ritual was polishing off as much alcohol as they could while discussing the average time they would allocate in their favorite aid/wine-stations, the game plan was to imbibe as much as they could handle and finish exactly at cut-off time and not a minute less.

No connoisseur of the red, nor enticed by the prospect of running amongst half naked Frenchmen in costume, I had come to this race because of the intriguing concept of doing all three: drinking, eating and running. I’ve run eight marathons to date and thought I enjoy running for its own sake, I usually need a boost – a secondary reason to get me over “the wall” at 30 km. In this case, it was the idea of eating an oyster, which was what the aid station in kilometer 37 had to offer. It was such a memorable foodie thing to do during a marathon that I just had to see if I had the stomach for it.  So from the onset, I had decided that I would attempt not my fastest time but savor all the delightful gourmet hazards I had to run through.  Given that, it was probably the toughest 42 km I ever had to negotiate.

Getting a slot to race in Medoc is near impossible unless you run for a Chateau or register very early. So when the opportunity presented itself for me to be part of team Siran, I agreed despite the fact that I literally had to jump hoops to get to Bordeaux. From green cards to hurricanes via planes, trains and incomprehensible rental car company contracts, I made my way from San Francisco to Bordeaux, a journey of at least 26 hours.  My sister Margaret (who was coming from Spain) and I met in a small hotel near the Gare St. Jean in the town of Bordeaux and drove 45 minutes to the town of Labarde where Chateau Siran is located.  We arrived just in time for cocktails on the ninth day before the race. At the cocktails, Ed had promised: “You will discover in yourself emotions you never thought you had through wine.”  I was intrigued.

Despite the weather report of extreme sun, the day of the race was overcast with a slight chance of showers-in short, perfect running and drinking weather! 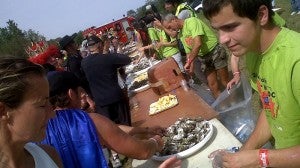 The race started with a presentation of runners in costume.  It turned out to be a wildly creative circus of hairy legs stuffed into feathered ostriches, Minnie Mouse tutus and zebra thongs. After the wheel chair athletes took off, two fighter jets from the Air Force flew over the starting line amidst a Cirque de Soleil performance above the runners. Of the 22 refreshment stands, only 20 were for wine tasting (“for the sake of moderation” says the race announcer). The stands clearly marked the 42-kilometer course.

It was a scenic course that shifted from gravel to sand to cobblestone and rock at various points.  The course was mildly hilly as it traversed sloping vineyards and climbed beautiful stone chateaus overlooking the Gironde River.  Except for the lack of portalets, which encouraged runners to pull a “piss rustique” among the vines, it was a well-organized race with genuinely enthusiastic spectators. Not known for their spontaneity towards tourists, the French locals nonetheless lined the country roads clapping and cheering the runners on by name. For even the most jaded of marathoners this is always a welcome sight to behold. All over the course, music could be heard coming from live six-piece orchestras, state of the art loudspeakers and even an English deejay at the turntables.

Thanks to a nameless Frenchman who paced me for the first 21 kilometers, and my sister Margaret who ran the toughest part of the race with me from kilometers 39-41, I crossed the finish line with a time of 3:58 despite having to detour off course and search for a toilet.  But I found out the hard way that drinking wine, no matter how fine the vintage, on an empty stomach and complimenting it with GU (a food supplement used by runners for energy during a run) is no winning combination. I managed to cross the finish line as planned minus the oyster:  I just did not have the stomach for it at kilometer 37.

My sister, a spectator of the race, said that though she saw many runners looking tired a.k.a. “about to bonk” they all still had smiles on their faces. It seemed everyone was enjoying the moment.

At the finish line, we were given our finisher medal, a rose (for the women) and a glass of bottomless beer. The post-race party had just begun. En route to the beer tent, I was thrilled to find not your usual runners expo but a small carnival with rides and games and a farmer’s market selling locally-made French regional delicacies like homemade chevre, canard, foie gras, quenelle, etc.

This was the race that taught me that some things in life should be savored, like a really good bottle of wine or the ability to run a marathon at a leisurely pace. During the post race dinner of a truly memorable seafood casoulet and molten chocolate cake, conversation focused not on finishing times but the emotions of finishing such a unique race. Medoc showed me that a marathon is so much more than about one’s finishing time.

As for that “oyster” on kilometer 37, it will await me next year when I figure out how to not drink on the course but to eat as well.  This truly was my dream race. Needless to say, I am looking forward to the next Medoc next year. My strategy then? To pack lighter! •