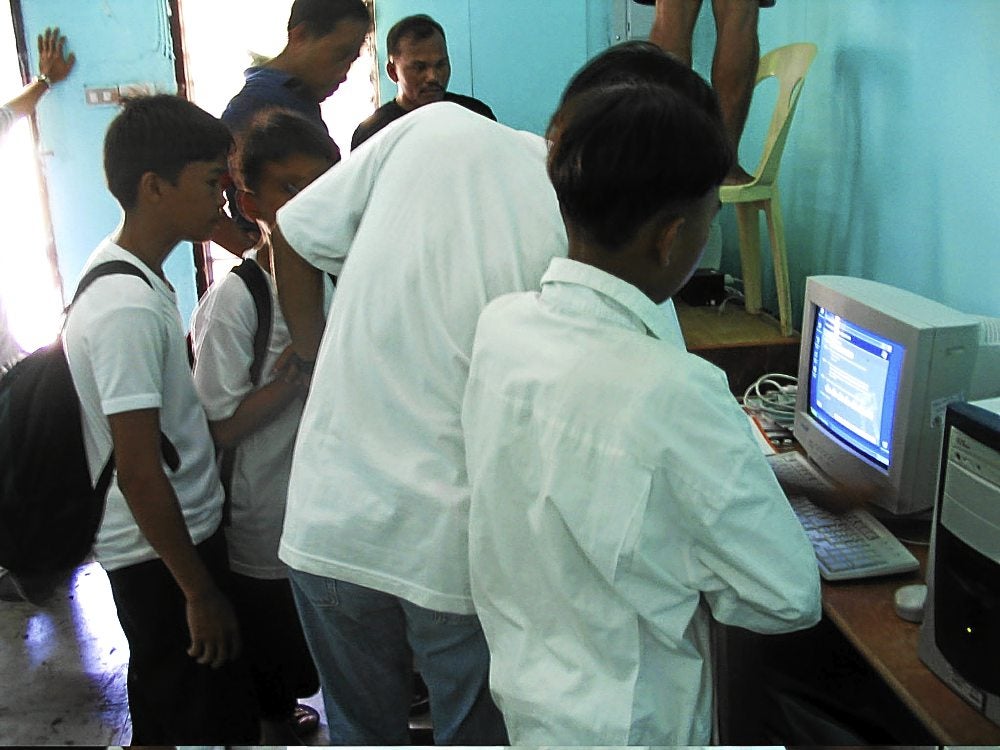 Students log on to the Internet. Inquirer Photo File

It’s reminiscent of a scene from a horror movie: Countless men, women and children sitting frozen in front of computer monitors, completely enthralled by the flickering images before their captive eyes. They do not stir, their concentration thoroughly held by whatever the computer conjures up before their faces, hour after hour, day after day.

While this scene might seem over-the-top and frightening, the reality is not too far from it. Since its inception, the Internet has grown and spread like a technological hothouse flower, unbridled and undeterred. In hushed tones, people ponder if we have been trapped by the Net, if we have become, like the people in that nightmare scenario, too dependent on the Internet.

Just the idea that a person can develop an unhealthy dependence on the Net is a controversial one. There is even a name for it – Internet Addiction Disorder (IAD) – though the layperson’s understanding of Internet addiction is simple enough: It’s when people stay online so much that their health and real life begin to deteriorate.

“It’s not a real disorder in the sense that it’s not in DSM-IV, the reference used by psychologists and psychiatrists in assessing mental health conditions,” explains Albert Go, a school psychologist at the Ateneo de Manila University’s Loyola Schools. “But it has gotten a lot of interest lately, as proven by the many related literature. Persons who have this tend to use the Internet in almost every aspect of their lives.”

There is a call, for example, to include IAD in the next edition of DSM – the Diagnostic and Statistical Manual of Mental Disorders – in 2013.

“I don’t think there’s a specific medical procedure or drugs out there to cure it – that’s why it hasn’t been listed,” Go says.

Obviously, spending a lot of time sitting in front of a computer cannot be healthy; Internet addiction promotes a particularly sedentary lifestyle, leading to all sorts of physical problems. The amount of time people spend AFW (Away From Keyboard, in Internet speak) continues to shrink. But the physical problems that result from Internet addiction pale in comparison to its possible psychological downside.

Perhaps the greatest danger is total immersion in the Internet, to a point when people start to ignore their real lives so they can remain longer in their online lives. In other words, they choose to live the lives of their avatars instead. This inability to tell fact from fiction, the real from the imagined, can wreak havoc on people’s social relations, isolating them in an unhealthy make-believe universe.

“This may also be the reason why [the Internet] is very addictive,” continues Go.  Add to that   the fact that the Net can now invade a person’s life in so many ways (Facebook and Massively Multiplayer Online Role Playing Games or MMORPG, for example), and one can see how it can become omnipresent in our lives.

“The accessibility of the World Wide Web makes it easier for Filipinos to embrace this technology,” Go says. “For younger people, there are the online games; for the professionals, the social networking and blogging sites.”

And then there are the darker corners of the Internet, everything from scams to pornography. As a people who embrace technology early – we basically led the world in maximizing usage of the cellular phone-based SMS or Short Message Service technology – it doesn’t come as a surprise that Filipinos are now thoroughly wired and grafted to the Net. Out of a 2010 population of about 94 million, an estimated 30 million Filipinos, or some 34 percent, are online. And that number continues to swell.

In an April 2011 interview with ABS-CBN’s TJ Manotoc, child psychologist Dr. Lourdes “Honey” Carandang noted some possible signs of Internet addiction: “loss of appetite; lack of sleep; fatigue and restlessness when not in front of the computer.” Carandang added that a problem at home can be one reason for a child’s developing addiction to the Internet.

Between their homes and the ever-present Internet cafes, younger Filipinos are much savvier with the intricacies of going online than their parents, making them far more vulnerable to the effects of Internet addiction.

“Unlike TV, the Internet is still largely unregulated,” Go says, adding that children as young as 5 can open their own Facebook accounts, and adult sites can show up in the middle of a Google search. “The best way is to introduce children to sites that are educational as well as fun and to take all safety measures to make sure the security features on the computer are enabled.”

There are no hard and fast rules about how old a Filipino child has to be before he or she is allowed to travel the web unsupervised. “It’s really all about trust and the parent-child dynamic. Making a big fuss  of it might only make the child more tempted to discover the other hidden parts of the World Wide Web,” Go continues. “On the other hand, being too lax opens the child to the addictive characteristics of the Internet.”

This is quite enlightening when arrayed with the many studies around the world which claim that Internet addiction actually does exist and should be studied more closely. There are also researchers who say that what appears to be Internet addiction is actually just a collection of symptoms which may be caused by other disorders. It seems all too easy for an unsuspecting surfer to wind up trapped in the nether regions of the Internet. There are no street signs where they’re going.

All this underscores the reality that Internet addiction remains an elusive and evolving area of study. As more and more Filipinos come of age in the era of the Internet, the need to understand and perhaps solve the puzzle of Internet addiction becomes more crucial. As Go concludes:  “Seriously, in spite of the coverage it’s been getting from media and researchers, [Internet addiction] is still a relatively new phenomenon. More research must be done to understand it. For now, we haven’t even scratched the surface.”