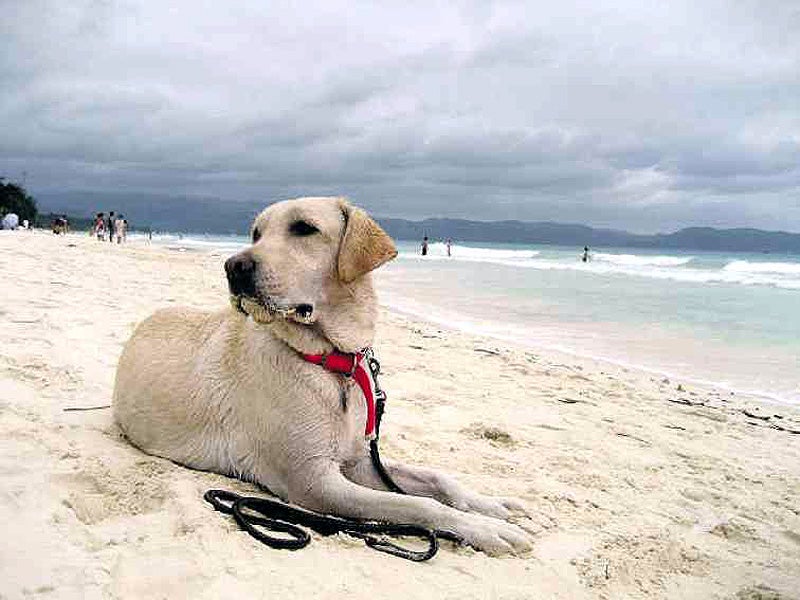 MISSING BANANA. Losing a pet can be a genuine tragedy for some people. If you don’t get it, then at least respect our grief

Every sunny day reminds me of her, because she loved the sun and the sea and the summertime. I still miss her every single minute.

I lost my dog of almost seven years, my yellow Labrador, Banana, last April 30, of sudden cardiac arrest. She would have been 7 years old last May 25.

I have lost dogs before, but Banana was, to put it simply, the dog of my heart. I’m not saying I will never love another dog; she is survived by her baby sister, an asPin (asong Pinoy) we named Kikay whom we found on the street two years ago, and who is my main companion in my grieving, patiently allowing me to literally cry on her little shoulder. Still, Ate Banana had a five-year headstart.

That extraordinary animal and I shared many wonderful times, and we were bonded in ways that dog people will easily understand – and that people who have never had pets will never quite grasp.

I am writing this, because I feel I have to explain why – why losing a dog is a genuine tragedy, and why some words help and some don’t, in case you ever encounter one of “us,” bereaved dog people.

As far as I know, I’m normal. I have a decent career, reasonable abilities, friends who will attest to my better traits, and no alarmingly dysfunctional obsessions with animals, although I have strong opinions about people who slaughter and eat dogs and sharks.

I don’t buy the idea that single women with no children, such as myself, pin all their frustrated instincts on pets, or use them as a substitute for domesticity. I chose not to have children, and I don’t regret it one bit.

Dogs, on the other hand, are my favorite animals, and for them I have infinite patience. The effects of a pet on one’s well-being are sufficiently documented. “Throughout history, animals have played a significant role in human customs, le-ends, and religions,” states the website of the US Department of Health and Human Services on the health benefits of pets. “Primitive people found that human-animal relationships were important to their very survival.”

The first recorded use of animals in a therapeutic setting in the United States was in 1919, the website reports, at St. Elizabeth’s Hospital in Washington, DC, when dogs were used as companions for psychiatric patients. Today, they continue to provide therapy for children, senior citizens, people with mental problems, and even shell-shocked soldiers. The popularity of the Dr. Dog program worldwide, carried out locally by the Philippine Animal Welfare Society (Paws), is further proof.

I don’t need studies to tell me, however, what dogs brings to my life. Where do I begin? Unconditional love, complete acceptance, humor, and a primal wisdom that allows them to live in the moment, not bear grudges, and find joy in the simplest of things – basically, traits people should learn to develop to become happier.

What have people told me that have helped make things easier?

“She had a good life.” Every pet owner, no matter how devoted, will always feel some guilt, like there was more he or she could have done for the beloved animal. Should I have spent more time with Banana instead of working? Did I do all I could to deal with her many health problems? The questioning could go on and on, but when people who knew your pet assure you you’ve done enough, you feel better.

“Cry as much as you want.” It’s a huge comfort to be reassured by other human beings that it’s okay to be sad about an animal, and they are willing to keep you company while you are. Conversely, when people beg you to stop crying, you feel awkward, silly, and resentful that they won’t let you be yourself, because they probably just don’t know what to do with you.

Finally, from people who did know her – “I miss her too.” Hearing this from friends and from her doctors reminds me that Banana really was a wonderful dog, and I’m not the only one who wishes she was still here.

What do I hear that reminds me why I sometimes trust animals more than people?

“Move on.” I got this from a relative – the day Banana died. I wanted to tell him exactly the same thing – move, in that direction, as far away from me as possible. This is my space for grieving, and I’ll stay as long as I need to and as long as I feel I am honoring her, thank you.

“Get another dog.” I initially wanted to kill anyone who said this to me, but I have learned that, while some folks do look at dogs like soiled underwear you can change in a jiffy, others mean well. One friend found a dog in a shelter, while another, from experience, simply said that caring for a new animal – not necessarily a replacement – helped ease the sadness.

I prefer to see my mourning period through, and I would not consider getting a dog of the same breed, or who looks a lot like the previous pet. I believe that when Kikay is ready to mentor a baby sister, Banana will send her to us.

Then there’s my favorite: “Good thing she’s just a dog.” Yes, I was told that-admittedly, maybe in the context of “At least she’s not a person.” Still, it made my head spin, because in many ways, I consider the loss just as significant and life-altering.

I remember a self-explanatory anonymous passage I read on the subject: “If you think it’s ‘just a dog,’ you will probably understand phrases like ‘just a friend,’ ‘just a sunrise,’ or ‘just a promise.’”

To people who honestly don’t see the point, I’m not asking for comprehension, really. If you think I’m a fool, then let’s stay out of each other’s faces.

But I do ask for respect, and recognition of the fact that my feelings are valid and are not a sign of weakness, because I have lost a very important part of my life.

Maybe you’d rather buy a bag or a watch at a price that can feed a barangay (village), or spend your time and money injecting stuff into your face to make you look frighteningly younger. If that’s your business, no matter how difficult that is for me to understand, I’ll leave you to it. So leave me to mine, which, right now, is missing my dog.

Life goes on for Kikay and me. We’re finding new things for her to do, and I manage to work, stick to my routine, laugh at jokes, and remain a productive member of society. I don’t think I am seriously burdening anyone with my grief, other than sometimes texting a sad face (:c) to selected friends to let them know it’s a bad day, and hoping for some words of comfort.

I know things will get better, and I will be happy again; my dog taught me that, too. But for now, the world has become a less sunny place, and will continue to be so for a while. When I miss Banana and feel like crying, I do, and nobody is going to tell me that I can’t – especially not “just any person.”

Because she wasn’t “just a dog.”