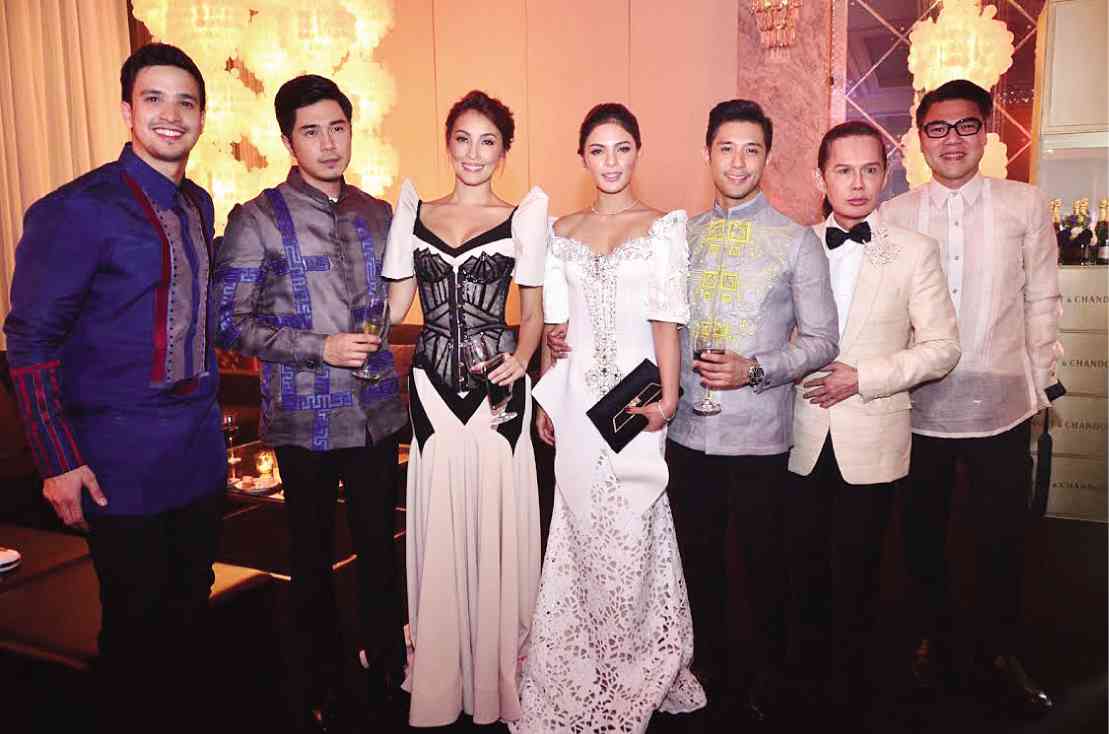 Still on a nationalistic high

“Proudly Filipino!” Pinoy pride has never been so gratifyingly embraced as today, thanks to the Apec summit as well as the multiple celebrations of different Filipino brands.

Nationalism radiated at the launch of Swatch’s “Ode to the Flag” watch. There is no doubt that the Swiss brand’s ties to Philippine culture have grown stronger with the efforts of Swatch Philippines’ queen, Virgie Ramos. Swatch instills a sense of national pride in all of us with this launch, the second timepiece designed by National Artist BenCab.

For one night, luminaries converged at the Swatch & Swatch Building in Makati and were transported back to the early 20th century when European culture had its strongest influence in the country.

Guests sported their Pinoy couture and dined on a selection of Parisian-inspired dishes. Dinner was served on long banquet tables with paintings of the Philippine flag and text from the Panatang Makabayan cascading down from them.

The lanterns hovering above were decked out in BenCab’s “Larawan” series and “Ode to the Flag” artwork. The servers wore recreated serpentina skirts from the 1900s, and there were guards in traditional rayadillo uniform cut from blue-and-white striped cotton fabric.

Love of country through music

Maestro Ryan Cayabyab took the guests on a journey through Philippine history, serenading them with songs from different decades, reminding them that music is an important gesture of showing love for the country. Mark Bautista, Sheila Valderrama-Martinez, and “Rak of Aegis” stars Aicelle Santos and Jerald Napoles warmed our hearts with their powerful singing.

Historian Ambeth Ocampo noted in his speech that wearing the flag on our wrist is not only a sign of nationalism but a reminder of “what Filipinos should be.”

The “Ode to the Flag” Swatch is a representation of the country’s fight for freedom, as well as the continuous struggle for equality, courage and peace. BenCab has featured the flag in many of his artworks, but never this way.

The program was capped with the guests on their feet, hands close to their hearts, as they sang along to the national anthem.

Check out the “Ode to the Flag” Swatch at all Swatch shops.

BenCab has been very busy, celebrating his 50 years as an artist with an exhibit that highlights a retrospective of his life’s work in seven participating museums. In line with this special milestone, Rustan’s, as one of the artist’s retail partners, held an event in honor of his significant contributions to the nation’s embodiment of visual arts.

Rustan’s first family headed by its patriarch Ambassador Bienvenido Tantoco attended the successful launch. Also present were the artist’s family and friends, media members and Rustan’s loyal patrons. Many of the BenCab special 50th-anniversary-edition home pieces were almost sold out that evening.

Pinoy pride also hits the local fashion scene with the launch of the book, “Fashionable Filipinas: An Evolution of the Philippine National Dress in Photographs 1860-1960.”

The extraordinary book is curated and written by Gino Gonzales, a scenographer and lecturer at Ateneo de Manila University, and Mark Lewis Higgins, a visual artist and codirector of Slim’s Fashion & Arts School.

The book was created to shed light on an aspect of our history, and to contribute to our sense of national identity—a much-needed cause in a rapidly globalizing nation.

It showcases the evolution of the terno with over 200 rare, previously unpublished photographs from museums and private collections in the Philippines, Spain, the Netherlands and the United States.

The book covers a century of great social, political and economic change as the terno not only came to parallel the country’s stride toward modernity but, in the final chapters, also became a symbol of an independent nation.

Published by Ben Chan of Bench, the book supports fashion education as part of Bench’s Love Local campaign. Bench is also donating 100 books to municipal libraries across the country. The book launch was co-sponsored by Moët & Chandon.

To illustrate that the terno can and should remain relevant to stylish young women today, students and young graduates of Slim’s Fashion & Arts School created contemporary terno and a few bespoke barong for popular artists and celebrities at the launch event.

Slim’s owner Sandy Higgins was so proud of her team, who worked extremely hard for this project. Most of the Bench stars gamely posed at the Peninsula Manila foyer, with photographer Patrick Uy doing the honors.

Taking Filipino fashion and styling to an avant-garde level is Jun Jun Ablaza. His annual birthday exhibit, “AblazaAblaze 2015: Precious Presents,” had a myriad of art accessories from his collections, and magnificent tablescapes with a grand central art installation.

Thanks to Viking Range Kitchen equipment and Jun Jun’s fund-raising efforts, a sizeable donation was given to the underprivileged children undergoing chemotherapy at UP-PGH Children’s Cancer Ward.