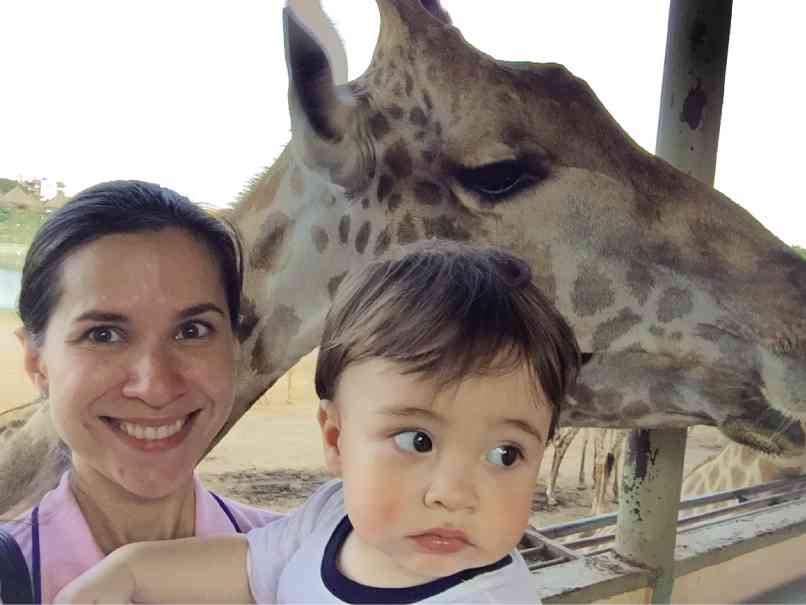 THE AUTHOR with her son: “None of us have been this close to giraffes and feed them.”

THE MEMORIES I have of Bangkok are temples, shopping, eating and massages. I tend to see the Thai capital as a destination for adults than young families.

However, last week, when my family went to Bangkok for a short holiday, I was surprised at the delightful treats it had for children! In fact, as we researched and made plans on how to spend the next few days, we had to limit the itinerary for the children to just two days because my husband and I wanted time to just relax as well.

Our son chose to visit the Samutprakan Crocodile Farm, whose biggest appeal is its uniqueness. Upon entering, there are photo opportunities with baby tigers or baby monkeys. A number of people were lining up, but we weren’t comfortable with wild animals close to our children.

It’s actually a small zoo with a few other animals on display, but the real attraction were the crocodiles. Some were enclosed in cages while most were out of reach under walkways on stilts.

These crocodiles were huge! I could imagine their giant mouths easily swallowing up grown men. For about 40 baht you can buy a bucket of fish heads and throw them down to the monsters underneath. Our son got a kick out of watching the crocodiles go after the food.

The highlight of the visit was a crocodile show which included the show’s talents, presumably the caretakers, doing crazy stunts such as grabbing the animals out of the water and pulling them by their tail, or throwing money into the open mouths of the crocodiles and then getting it back using their bare hands.

They also kissed the crocodiles on the lips and carried them around like babies. The men also slid on the crocodiles’ bellies, stopping just about an inch from their mouths.

But for the finale, they stuck their heads into the crocodiles’ mouths several times and, surprisingly, the reptiles didn’t bite.

I’m not sure if this is done in other crocodile farms around the world, but I think the act might not pass labor laws in other countries.

Though the show was devoid of special effects—it’s quite a simple production with jokes and tricks—but the part with the men’s heads in the crocodiles’ mouths packed more than enough thrills.

There was also an elephant show—not that great but check it out anyway—after which the children can be photographed sitting atop the elephants or standing beside them, for a small fee.

It must be mentioned that even if the place is clean, it seemed the animals are not being properly taken care of, locked up in cages that have seen better days.

But the kids enjoyed the visit. I recommend you spend a maximum of two hours for your own visit. You can go before or after lunch. Two hours is just right to catch the elephant and crocodile shows (there is one every hour) and maybe have some ice cream before heading back to the city which is about 45 minutes away.

The next day, we took our daughter to the Bangkok Safari World because she wanted to see dolphins.

At first it was a puzzle why a water park would be called Safari World, but upon reaching it we were impressed with the sprawling complex that included a mini safari and a zoo.

In the safari there were tigers, bears, deer, giraffes and other animals roaming around in their natural state—no cages here. It’s actually the humans who were enclosed within their vehicles for their own safety.

The zoo here also had shows. The place looked well maintained and the animals were in large enclosures but looked better than those in the crocodile farm.

We enjoyed the aviary that was filled with beautiful macaws. There were several shows featuring orangutans, parrots, sea lions, dolphins and one about cowboys. But you have to go early to catch them all. All shows are performed only once a day.

The dolphin show did not disappoint. Everyone in the audience loved it, but don’t expect a Sea World-type production.

After the show, we went around the zoo to look at the animals. We stumbled upon the giraffe feeding station and saw about a hundred giraffes walking around. For a hundred baht you can get a bucket of bananas and feed the gentle giants.

This was a different experience because none of us have had the chance to be this close to so many giraffes and be able to feed them. My son and daughter loved it and, surprisingly, even my 15-month-old baby was not scared. The giraffes were friendly.

We had an option to go to the Sea Life Ocean World in Siam Paragon. This was highly recommended by a friend who used to live in Bangkok, but after Safari World, we opted for another activity instead. Maybe we will visit Sea Life next time.

We wanted to check out the floating markets; Taling Chan Floating Market was said to be open all day.

Unfortunately it was open only on weekends and we had to fly back to Manila on a Saturday morning.

We went instead to the Chao Phraya River and hopped on a boat from Sathorn. There were many boats—ordinary and tourist type—that pass through various attractions such as the Royal Palace and several beautiful temples.

It’s easy enough to hop on and off and make your way around. Ticket prices range from 15 to 40 baht. Since it’s not a special guided tour, you can go at your own pace and stop when the kids get restless.

At the end of the river, we bought one-way tickets to a new development called Asiatique The Riverfront. With its giant Ferris wheel, shopping and food stalls, this was a treat for those wanting to visit a family-friendly night market with no big crowds.

Returning to Manila, a new image of Bangkok, with priceless new memories, had formed in my mind.