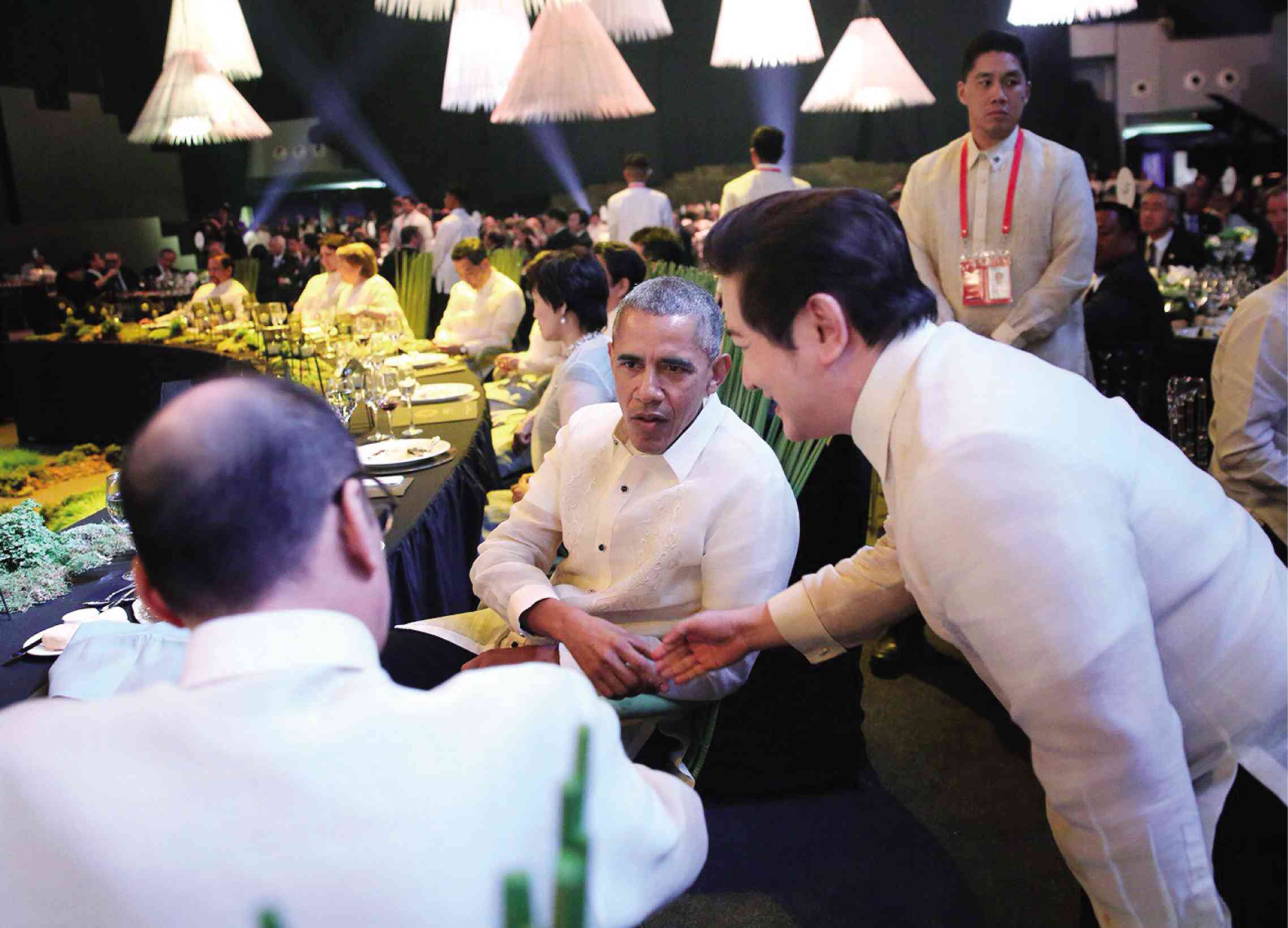 1) Say it with flowers

From gerberas to roses, they bring cheer and the message of Filipino hospitality to Palace guests.

Exactly what the Philippines is now-—progressive, forward-looking (highest growth rate in the region) yet keeping its exotic allure and soul—was captured by Filipino designers and artists, from Kenneth Cobonpue, Milo Naval to landscapist Ponce Veridiano and floral design artists like Robert Blancaflor.

Kenneth Cobonpue’s “Yoda” chair is iconic not only because the region’s economic leaders such as President Aquino and US President Obama sat on it, but also because it shows how—finally—Filipino craftsmanship melds with technology.

Indigenous materials such as rattan are now processed to be pliant, comfortable and beautiful. For instance, the Yoda chair supports one’s back and follows its movements, and swivels.

Milo Naval’s furniture (rattan, coco shell) is also the product of stringent technological process. His were used in the cocktail reception areas at the SM MOA Arena.

Throughout 2015, a cross-section of Filipino artists, directors and the rest of creative industry was mobilized, led primarily by former Cultural Center of the Philippines president Nes Jardin.

Floy Quintos, Gina Godinez (for the main Apec shows organized by the Palace), Rowell Santiago, Gino Gonzales were among them.

Culinary artists gave traditional Filipino cuisine a twist. Many have been tapped, from hotels to chefs such as Margarita Fores, Glenda Barretto, Gilbert Pangilinan.

Even the jaded observer could get star-struck.

Canadian Prime Minister Justin Trudeau seemed so bashful, not conceited at all, being the recipient of all that adulation.

Not known to many was how just as interesting as the economic leader was the wife of Canadian Ambassador Neil Reeder. Aireen Reeder was a favorite at the Apec events because she was so friendly and cheery—and incredibly, she speaks good Tagalog with an almost native accent.

Asked how she learned to speak almost like a Pinoy, she downplayed the feat, as if it was the most casual thing to do, and said she just learned it from people around her.

Certainly among those with an Apec memory was our editor in chief who, the whole night, longed to stand behind President Aquino and President Obama because she wanted to see up close how the two were interacting.

Thanks to my moment of deluded boldness, she got her wish. Mr. Obama remembered her as the editor from the martial law years and the People Power revolution. “The President (Aquino) has told me about you,” he told her.

He must have remembered her as the same woman who walked up to him at the Palace some time last year during his state visit.

And like the last time, he promised again to autograph her Obama books. He made good that promise.