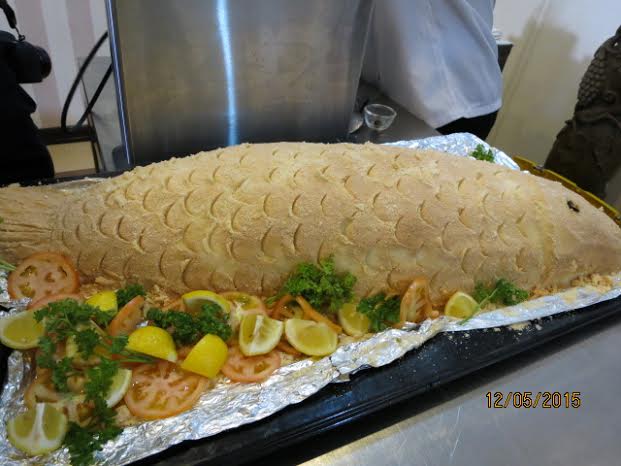 Though he comes from a family of chefs, Sau del Rosario long resisted the idea of following in their footsteps. Issues with his father, a chef who was always away at work, haunted him.

Hence, as he recounted during his recent cooking demonstration at the Maya Kitchen Culinary Center, when it was time to choose a course in college, he decided to major in Economics.

However, because his grades turned out to be inadequate, he shifted to Hotel and Restaurant Administration. A number of jobs in the hotel business followed soon after graduation—almost every kind of job, he said, except being in the kitchen.

And yet the allure of good food would prove too much to ignore. Passing by the hotel kitchen every night during his shift, he would be drawn to the delicious aroma of freshly baked bread. When he started hanging out in the kitchen, one of the chefs told him he had good hands and asked him to work with them.

One thing led to another, and before long, Del Rosario was working his way up the culinary ladder, rising from junior commis to being senior chef at the Manila Peninsula.

Jobs overseas came next, including stints in Nice and Paris, where he worked with Michelin-star chefs. Back in Manila, he opened Le Taxi Bistro in Malate, before leaving a year later for Shanghai, China, where he opened Luna, a Mediterranean-theme restaurant. He has also since worked at the Equinox in Singapore, Raffles Hotel’s signature restaurant.

Among the restaurants he has opened in Manila are Chelsea, M Café and Le Bistro Vert. Today he’s culinary director at Center for Culinary Arts Manila and is the recipient of the Most Outstanding Kapampangan Awards for Culture.

One of the recipes he demonstrated at the Maya Kitchen recently was salt-crusted snapper. For this, he used a humongous whole fish, into which he patted a paste of salt and egg whites until it was all covered from head to tail. He had also prepared a whole salmon that weighed about six kilos, which was served to the participants at lunchtime.

It’s an easy recipe to prepare, he assured us, and made us promise to cook it at home. Which was what I did for this column. However being new at this, I just used a smaller fish (1.2 kilos).

Was it easy to cook? Well, encrusting the fish with salt was like playing, as Del Rosario pointed out. The hardest part was probably deciding when the fish was fully cooked. The best part is presenting it to your guests at the dinner table (especially this Christmas), with the dramatic styling of the fish, complete with scales.

Here’s Del Rosario’s recipe for salt-crusted snapper, which I’ve adjusted to suit the slightly smaller fish that I managed to buy in Rustan’s Marketplace.

Preheat oven to 400ºF (200ºC). Line a large baking tray with parchment paper or aluminum foil (make sure the tray is large enough for the fish to fit in). In a medium bowl, combine the salt and egg whites. Knead the mixture with your hands to form a thick paste. (The consistency should be like that of sand that has just been washed with seawater.)

Insert the lemon, onion, garlic, celery, leek and dill inside the cavity of the fish. Brush the surface of the fish with olive oil.

If desired, make decorative patterns on the fish: With the tip of a teaspoon, make a line drawing at the neck of the fish. Then poke the salt crust at regular intervals to resemble scales.

Bake the fish in the preheated oven for 45 minutes to an hour, or until the crust is very firm and golden brown. Slide the parchment paper or aluminum foil and the fish onto a serving platter. Let rest for about five minutes. Crack the salted crust with the back of a large knife and discard the crust. Brush away any remaining salt from the fish.

Tips from chef Sau
The salt paste should be firm enough to hold the shape of the fish. If it’s too soft, it will fall off during the cooking process.

If you use coarse rock salt, it may be harder to crack the crust after the fish is cooked. The finer iodized salt may be easier to crack.

After you’ve removed the fish from the oven, it will continue to cook. Hence it’s important to let it rest for about five minutes before cracking the crust.