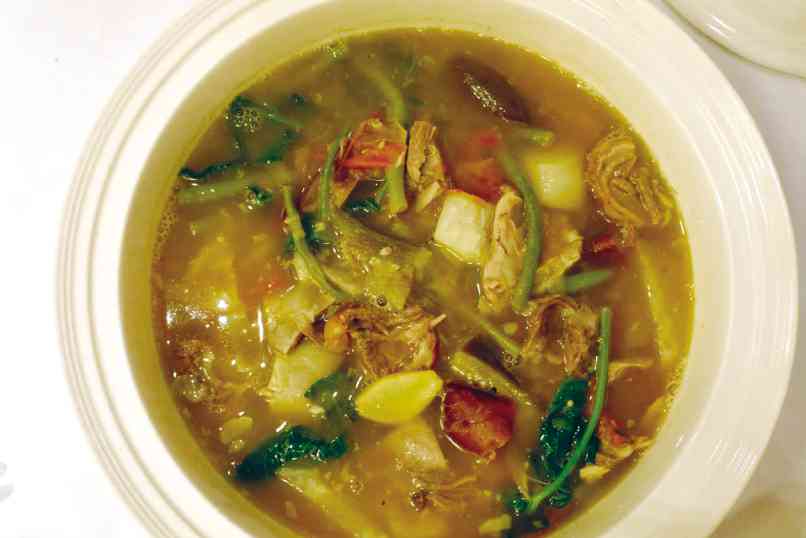 ‘Sinigang’ with ‘lechon’–the best, but keep politics off the table

MARIA! Say it once and there’s music playing. Say it twice and it’s almost like, well, a lovely little gem of a restaurant situated across from Xavier School’s grade-school gym.

It’s a peculiar spot for a proper restaurant: The traffic-clogged roads in the campus’ perimeter are lined with small cafés for moms waiting to pick up their kids, or for high-school students scarfing down a plateful of grease and rice after class.

Maria Maria, the restaurant, must be an unexpected boon for those in search of actual good food in the area, though its location makes it inaccessible to most of us until after the traffic clears.

My alma mater Xavier has changed a lot since I last wore my white short-sleeve shirt and dark blue trousers. Now students actually learn Chinese, which in the 1980s seemed about as unlikely as the fall of Communism.

There is also an antibullying campaign, although parents who want to be sure that their children survive the corridors of the school can enroll them in Krav Maga for kids, established by my former seatmate to make sure the next generation is combat-ready.

In my time the campus was actually a flat surface with buildings on it and not like a mall. I don’t see any open fields left for after-class punishment standing or squatting under the sun.

But I learned a lot at Xavier, of course. Among other things it taught me that the world is a war-zone; as a writer, I’ve always remembered to always have a pen, not least so that I can stick it into someone during a fight.

But I digress. Maria Maria is, not to put too fine a point on it, a restaurant that serves former President Erap Estrada’s favorite family dishes, and as befits a man who takes his carnal pleasures seriously, they are plentiful and well-appointed.

The menu, at first glance, seems to be a random melange of various cuisines and flavors, but there is a pattern to it, and in the end it falls in three distinct categories: ancestral Spanish dishes, innovative Filipino home cooking and British food.

That doesn’t mean modern British food but slightly retro favorites, such as Coronation Chicken, which was created for the 1953 ascension to the throne of the current Queen. It remains a staple of fillings for sandwiches sold at railway stations, though not so much at British dining tables, and almost never in restaurants.

Eton Mess, a pudding made from crumbled meringue and berries, is making something of a comeback but originates from the same era.

Much more interesting among the items, however, is contemporary Filipino food. Worth the price of admission alone is a sinigang made with bits of leftover lechon—which, obviously, was good to begin with, but in a broth that tasted of kamias and tamarind (I could be wrong). The skin still had a gentle crackle to it and the meat was tender enough to strip with a fork.

Tuna kinilaw was well-presented, although we thought for a while it was part of the table décor, until we realized that the crunchy exterior cups were edible and filled with spicy, creamy pieces of raw fish.

The pork knuckle, though we didn’t have it that night, was deemed the best in town by the friend who brought me there, and he is a purveyor of all things knuckly.

Also worth trying: the squid, not so much cooked in its ink as delicately placed atop it, but soft and meaty nonetheless; and the adobo in three permutations (puti, pula and with gata) —popular at the table but unconvincing for me. I like adobo and am always open to new versions of it, but having to eat adobo followed by adobo and more adobo seemed to be more proof of a concept than an actual degustation worth purveying.

The others at the table were enamored with the kaldereta, but I like mine very goaty and pungent, while this was a more refined sort of reddish mush with a pleasing, mild-mannered disposition.

Of the three types of cuisine here, I feel that the restaurant’s strongest footing is on the old Spanish dishes, with the experimental Filipino dishes a close second.

The British food is a distant third, but then this could be attributed to bias; I’m not very fond of old-fashioned British cuisine.

We were a table of seven but we barely grazed the menu, and I will soon be back to try other dishes that caught my eye. The waiter isn’t very good at guiding you through the menu (we wouldn’t have known about the several exotic blends of iced tea if we hadn’t discovered it ourselves).

So you’ll have to study the menu; and it’s something that really takes a bit of looking into.

I’m ambivalent about Estrada as a politician, but even if you feel strongly about him, either way it would be a shame to let it cloud your enjoyment of a restaurant that was created by, and for, people who love to eat.