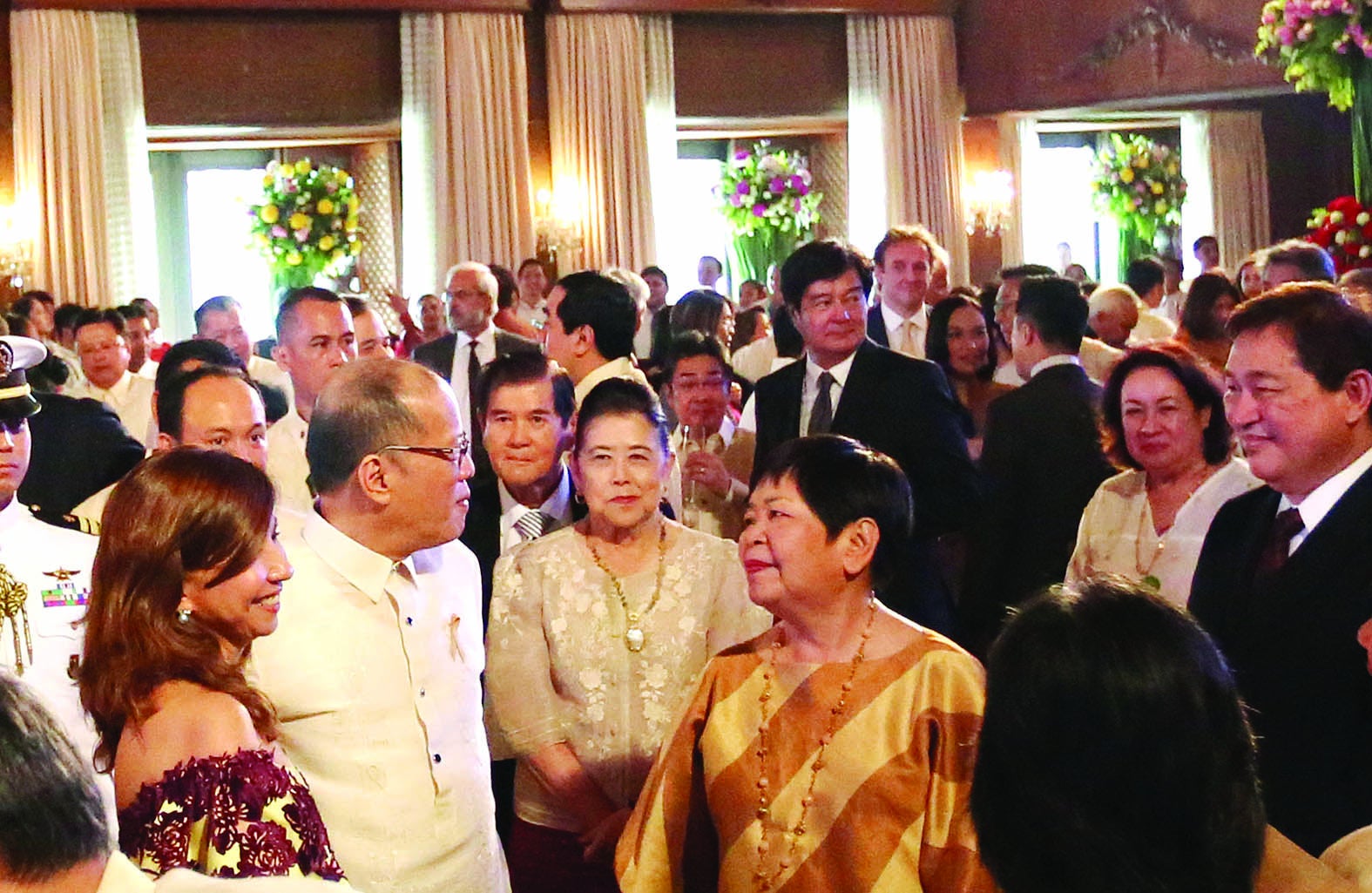 Held last Thursday was what must have been the most attended—and most upbeat—vin d’honneur at the Palace under the Aquino administration. It was the last to be hosted for the diplomatic community by President Aquino, whose term ends in June.

It drew a good mix of the who’s who from government, the political establishment, the Church, business and industry, and civil society. The atmosphere wasn’t only cordial, but was even cheery, with Mr. Aquino stressing his gratitude and that of the Filipino people to the world community for the support it has been assiduously extending to the government’s relief and rehabilitation efforts in the disaster-stricken Visayas and Mindanao, and to its peace efforts.

Even if Mr. Aquino began his remarks with a quick nod to nostalgia, the morning reception’s mood was upbeat, if not optimistic, not at all what one expected of a gathering hosted by an administration that is on its last months. (And we’ve heard of how a doom-and-gloom atmosphere could be in the Palace of eras past.)

Perhaps it matters that Mr. Aquino is enjoying high approval ratings at the end of his term—the highest so far for a Chief Executive, and a nontraditional politician who has just made a potentially unpopular decision of vetoing the bill that would have granted across-the-board monthly pension increases. (How that will affect, if at all, his approval ratings remains to be seen.)

The reception décor echoed the mood—flowers in bright spring colors were clustered on the backdrop of the platform where Mr. Aquino and the dean of the diplomatic corps, the Papal Nuncio, Archbishop Giuseppe Pinto, offered toasts to the new year.

Simple and bright floral arrangements were on merienda tables arranged around the ceremonial hall. Guests could choose to walk around and hobnob or sit down to eat the hearty merienda fare prepared by Margarita Fores, the newly named 2016 Asia’s Best Female Chef.

We got to chat with Canadian Ambassador Neil Reeder and his very friendly wife, Irene, who speaks good Tagalog. They told us about the Fil-Canadian Senator Tobias Enverga, the first Filipino-Canadian elected to high public office in Toronto, who’s on a visit here, with other Fil-Canadians, to help needy communities.

With Tootsy Angara, we got to talk about the new Miss Universe Pia Wurtzbach and how Tootsy’s husband, Sen. Sonny Angara, for a time became the whipping boy of netizens when, as a Bb. Pilipinas judge in 2014, he asked Pia to answer his question in Filipino.

Pia fanatics attributed Pia’s loss to that question. Tootsy recalled how Pia not only didn’t take that against the senator, she was also gracious enough to assure him that. Pia told him that she hoped that he was holding up against the social media tirade.

It was notable that captains of business and industry seemed to have made it a point to attend this New Year’s toast, including Washington Sycip, Jaime Augusto Zobel, Tony Tan Caktiong, Erramon Aboitiz, Alfredo Yao, Carlos Chan.

Mr. Aquino sat beside us to grab a few bites. Did we talk about his love life?

He wasn’t having Coke Zero. It was regular Coke, not even Coke Light.

Looking at the bowl beside us, I solicitously nudged him to have his soup before it could get cold. That’s not soup, he said. “That’s gravy.”

And that was how I ended my morning at Mr. Aquino’s last vin d’honneur at the Palace.