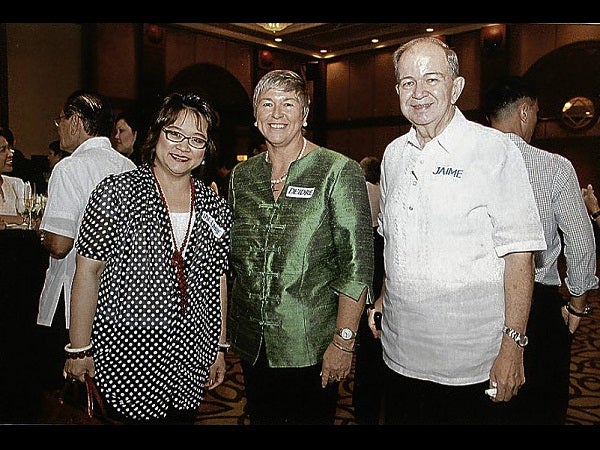 Pink fashion and cocktails in Cebu 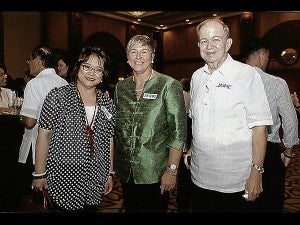 The Cebu City Marriott Hotel hosted An Evening for a Cause, as in Pink October, that was quite a gathering of notables and the glamour crowd. Guests milled at the lobby lounge or ventured to the al-fresco patio by the pool.

Among the early birds were news gals Chinggay Utzurrum and Cookie Newman, who were led to a cushion-strewn settee where they held court for the rest of the evening. “We’re pretty in pink,” Ching told Bruce, for, indeed, the invitations had requested “chic pink” as the evening’s dress code.

Carinna Sala was chatting with Mohammed El Emam, who resides at the Marriott. He is the new Cebu manager for Qatar Airways. He said he was searching the crowd for Dr. Hipocrates Efthimiou. They went to the same school in Alexandria, Egypt.

Bernie Aboitiz came into view with Rose Hennessy, followed by Susan Oliver, Agnes Heuttel and Yvette Vaas, who will be Paris Hilton in the forthcoming show “Fashion and Rhythm.” Mila Espina is directing it as a fundraiser for the Consular Corps of Cebu and the Zonta Club of Cebu I.

Pink Committee members Lani Osmeña and Mary Anne Solomon were radiant with the success of the Marriott event. Couturier Arcy Gayatin, who is her own best model, was in the crowd. So were Sandra Pesch, Lilith Heredia, Rowena Sainz and Claudine Ugarte escorted by husband Mikel Ugarte.

Enter another fashion plate: Susie Borromeo Milne in a deep shade of pink. Opting for heliotrope pink and breezing in from another party was Flor Ynclino who joined Chinggay and Cookie at their well situated perch.

It didn’t take long for the party to peak. You know that Ogden Nash reflection on ice breaking which says that candy is dandy but liqueur is quicker. And so the Marriott’s resident bartender whipped up pink cocktails for everyone to sip our gulp. 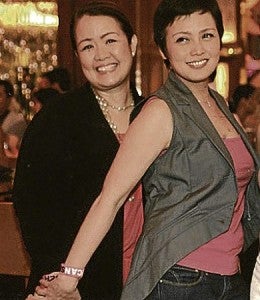 A big success was the Cebu Greyhound—grapefruit and calamansi juice with grenadine syrup and vodka. There was also a version minus the vodka. Some opted for “Pinkolada.”

That was made with pineapple and coconut blended with white rhum. One could also have chilled juices of orange, mango or pineapple, plus red or white wine. Someone asked for pink champagne and was told, “next year.”

“I’ll be brief,” said Bruce when asked to say a few words and preside the raffle draw. Most coveted prizes were dinner certificates at the Marriott’s Garden Cafe, and with good reason.

Executive chef Brendan Mahoney has upgraded the hotel’s cuisine, and it was evident that evening. The extensive buffet offered the juiciest fish filets ever, chicken wings in various versions, skewered shrimps, lobster balls and more. An innovation on the Visayan favorite binignit was topped with your choice of ice cream scoops plus a plethora of halo-halo ingredients to delight any sweet tooth.

Also held at the Marriott, this time at the grand ballroom, was the annual cocktail party hosted by the Cebu International School. “It’s a form of thanksgiving,” said Deidre Fischer, the CIS superintendent who has led this venerable institution (dating to 1924) to greater heights in recent years.

For one thing, CIS is one of three schools in the Philippines, and the only one in the Visayas, to have obtained international accreditation through the Council of International Schools.

Beautiful music was rendered by the CIS Chamber Ensemble, conducted by Joel Cruz. They played the classics as well as pop tunes masterfully arranged.

Everyone was attentive to the four students who spoke about their experiences: Jade Hoksbergen (Grade 10) on the Beijing Model United Nations; Bianca Villamor (Grade 6) on Philippines Week; scholar Isabel Gapas (Grade 11) on the International Baccalaureate program; and Phil Choi (Grade 10) on the Australian Cultural and Academic Exchange.

That was a trip he made in July with other CIS students to Adelaide.

It was a most enriching journey for them as well as for their chaperone faculty member, Ma. Socorro Escaño Laplana.