Chris Botti: Sting’s belief in me is why I have a career | Lifestyle.INQ ❮ ❯ 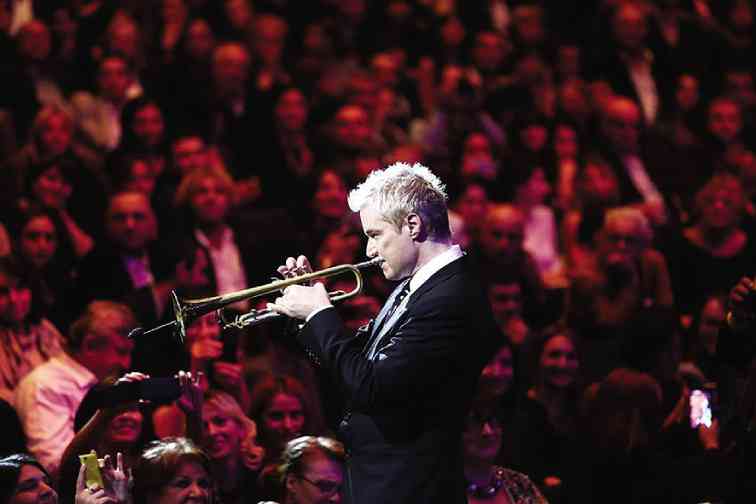 Chris Botti: Sting’s belief in me is why I have a career

This marks the first time Botti and Sting will perform together in Manila.

They first worked together in 1999, when Botti was invited as a featured soloist on Sting’s Brand New Day tour.

Botti and Sting recently had an e-mail chat with Inquirer Lifestyle.

Chris, you studied and worked hard as a musician before achieving success. Can you recall a few instances which you consider turning points in your journey, and why?

Meeting Sting, by far. It’s his friendship that I’m most proud of in my life. If I were to look at any accomplishment or association, by a long shot it’s my friendship with him. We’re family now, and his belief in me is the reason why I have a career, I can trace it to that. We get along so well and have become so close; to have such respect and admiration for someone and have it returned is truly amazing.

What he does and the way he conducts his life, I try in many ways to emulate. It’s based on being on the road a lot, the dedication you get from music, performing the music, landing in a city and getting straight to yoga, maintaining the practice—all those things that I have picked up from him have helped me enormously in my career.

When I was in his band, he gave me so much exposure by doing solos with me. But it was his urging that really made me, and the opportunity to be his opening act throughout the world that really launched my career in a big-time way. He’s always been my biggest supporter, best friend, and my big brother, really.

If you were to advise young musicians who want to widen their knowledge of jazz, which album would you recommend that they start with, and why?

I can’t say I have just one album I’d recommend. I’m always listening to Miles Davis’ “My Funny Valentine” (a live album recorded during a concert at the Philharmonic Hall of Lincoln Center, New York, on Feb. 12, 1964, and released Feb. 23, 1965 on the Columbia label); Keith Jarrett’s “The Melody At Night, With You” (recorded at his home studio in 1998, released on ECM in 1999); and “Frank Sinatra Sings For Only the Lonely” (a collection of torch songs, released September 1958 on Capitol).

You and Sting have played in the Philippines on separate occasions, not together onstage. How are you preparing for this show?

I honestly have had many people, like my friends, come to me and go, “Chris, I’m coming to your show tomorrow, I have never seen you play before, so is it just you and the trumpet?” They don’t realize it’s a night with an incredible jazz group, which moves around from classical to jazz to pop, and you have all these lines being blurred and it’s incredibly fun! Afterwards, people say, “I had no idea it would be like that.” We crafted it over many years of trial and a lot of errors.

I obsess about my show all day because I want it to be musically entertaining and also musically “high-end” for the fans… It’s not lost on me that we have fans who buy tickets, take a night off and come to the show. It means so much.

What is the one guilty pleasure that you look forward to whenever you’re home or on holiday?

Honestly, I’m not very good at relaxing and I don’t really go on holiday. I’m a bit of a workaholic, although I don’t view it as work. I’ve been doing the same thing since I was 9 years old; it’s just that now I get paid to do it, it’s awesome!

I practice yoga and enjoy playing chess, but being on tour and playing for my fans is what I look forward to every day. We’re on the road 300 days a year and people ask, “How do you have a life?” I don’t, but I wouldn’t change anything.

Sting, in the past, you’ve collaborated with a number of prominent musicians, lately with Paul Simon and Peter Gabriel. What’s the greatest insight you’ve gained from everything?

I’ve been fortunate to work with many supremely talented musicians over the years. I tend to surround myself with people whom I can learn something from, and my strategy has always been to play with musicians better than myself. I maintain a childlike curiosity about music, along with a sense that I need to work at it. I never want to stop learning.

Chris brings the trumpet to its most poetic, vocal-like quality. He’s altogether unique in that respect. His sound provides a compelling complement to my vocals and it’s always a true joy to perform with him.

You’ve played and experimented with practically all kinds of music. Which genre would you say is closest to your heart, and why?

I enjoy the creative freedom I have and the ability to do what interests me. I get bored pretty easily, and so I always like to do something new and that is hopefully surprising. I think my audience has come to expect that element of surprise.

This will be the first time that you and Botti will be playing in the Philippines. What excites you about it?

It gives you a chance to show an audience you’re a real human being; you still sweat and sometimes make mistakes. That close up, everything’s kind of human, which I like. I still get a buzz from being on stage. There’s no way to describe the feeling of playing for people who are pleased to see you. That’s something you can’t be blasé about.

What new things have you learned from aging?

I tend to live in the moment and don’t really think too much about the future or necessarily about the past. I recently celebrated my 64th birthday, and I’m glad that I’m my age. It’s fun because I have both sides of it— a bit of wisdom and the energy of a younger man.