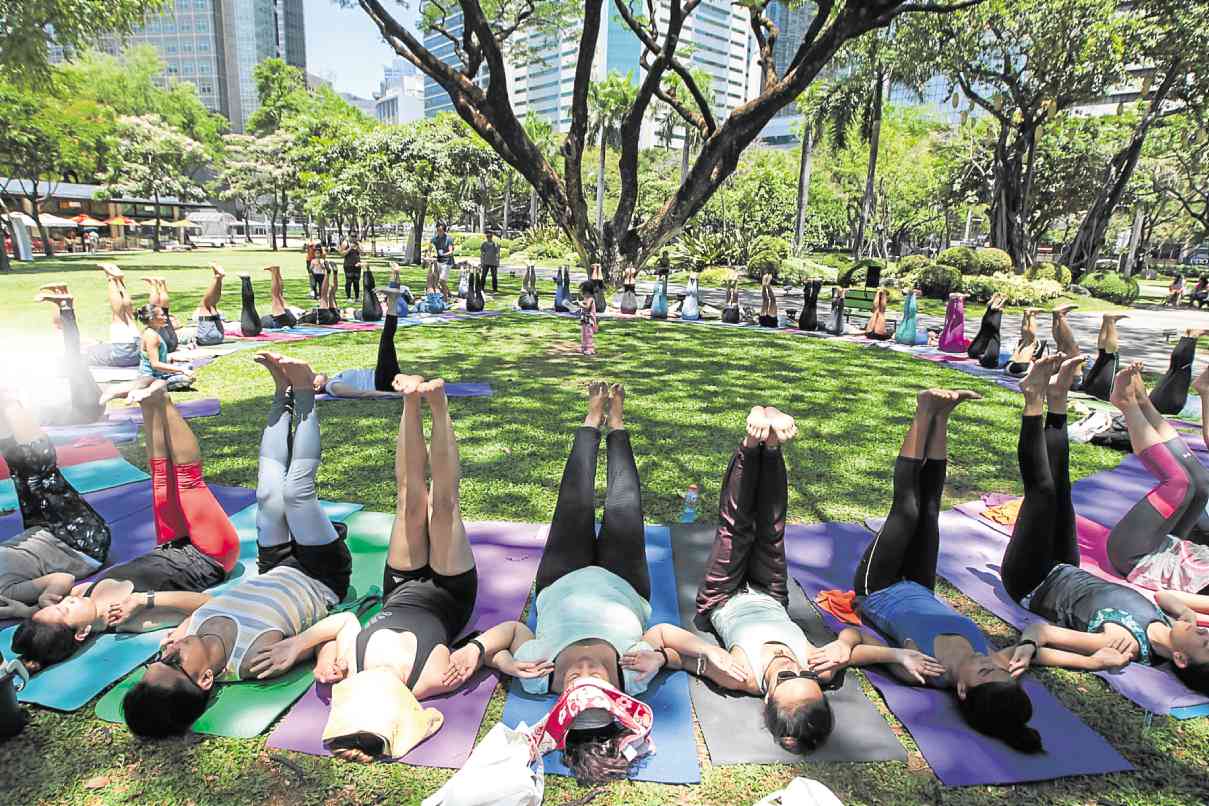 THE HEAT of the sun didn’t stop people from rolling out their mats on the lawn to participate in a public yoga class in the park.

Hundreds of yoga enthusiasts swept their arms upwards and lifted their gaze to the clear sky and rolling clouds, accompanied by breathings that tried to mimic the undulating waves in the ocean.

At the end of the workout, the American teacher chanted a soothing  “om” and  “shanti” (peace).

Organized by Urban Ashram Yoga (UAY) at Ayala Triangle Gardens, Makati, the event aimed to show how yoga was meant to reenergize the body and spirit and not subject the person to tortuous contortions. UAY is luring the urban warrior down the road to yoga practice.

Maricar Holopanien, UAY cofounder, said the event sought individuals with shared enthusiasm for yoga and well-being: “We’re bringing people together without the intimidation of the studio, and they are taught by a good teacher. They can breathe clean air on a no-traffic day and feel good about each other.”

The main event was a class led by Los Angeles-based master yoga teacher, Joan Hyman, who had trained UAY’s instructors.

Holopainen recalled that at the start of her practice, she couldn’t touch her toes when she bent.

“None of our teachers were flexible. Physically, we had our issues, but yoga can take you from where you are to something more,” said Holopainen.

Hyman, director of teacher training of Wanderlust studio which organizes yoga festivals, also dispelled the myth that yoga is only for flexible people.

Life in the fast lane

Hyman was a professional dancer who experienced a quarter-life crisis at age 28. Weary of back injuries and joint pains, the constant weigh-ins, body image issues, the low pay and competition in the dance world, she found solace in yoga.

“Yoga gave me a different way to move my body,” she said.

The practice healed her body by developing the muscles that supported her back and improved her use of energy through coordinated breathing and muscle contractions in strategic areas to release blocked energies.

“Yoga gave me a voice. In the past, I was working from an external place. It taught me how to live inside out,” she added.

Hyman observed how the West has taken the spiritual context out of yoga: “The West has a reputation for living with overconsumption. It grasped the asana, the poses, and made yoga more exercise-oriented as a way to appeal to the masses.”

She added: “The positive thing is that it’s pulling all the people in. It’s challenging because you meet resistance, sit still and work out a sweat, all of which are appealing to people. They can get their exercise, their so-called meditation all in one hour and move on to the next thing. Yoga is more sped-up. I’m hoping that people will try to understand that yoga is much deeper.”

She pointed out that a good teacher will teach not only correct placement and alignment, but also the right mindset.

“In learning yoga, you go into your breath, look into what is going on in your mind, and deal with the ego. A good yoga teacher will tell you how to move smoothly and lead you to tap into stillness that wasn’t there before class,” she said.

On her recent Manila visit, Hyman conducted continuing education for UAY’s instructors and conducted workshops on arm balances and restorative yoga, which are offered at UAY studios.

“Restorative yoga teaches people how to relax. It helps the spine move in different directions to create more alignment in the body. When there is better alignment, the muscles and bones are relaxed. The system moves into rest and your body begins to heal itself,” she said.

Hyman added that people are often in a constant flight or fight to cope with the frenzied world.

“Restorative yoga teaches the opposite— slow down. When we relax the nervous system and breathe properly, we can fight disease and sickness,” she said.

The restorative yoga class consists of lying on bolsters and props to support the bones and body. The teacher dims the light and invites students to mentally scan the stresses throughout their body, then instructs them to move in different positions. Finally, the individual relaxes into the corpse pose, which helps to repair tissues.

“When you lie on your back, you realign your thoughts,” said Hyman. “Restorative yoga is perfect for our world today. If we’re always on the go, we have to pull back and relax.”

She also underscored the importance of pranayama, the practice of breath control. “Most people aren’t connected to their breathing and you can see that in their eyes and skin,” she said.

“Controlling our breath is one of the hardest things to do. We hold so much stuff inside our body. In class, we start to go in and smoothen out the breath. Whatever is going on inside comes up. I start very light, teaching people how to breathe properly in and out through the nose.”

The pranayama can either stimulate or calm the nervous system, depending on the exercise. The teacher starts with sama vritti, the basic regular rhythm of breathing, which reduces stress hormones.

Once the person calms down, Hyman goes into deeper practices such as the alternate nostril breathing which revitalizes the left and right brain hemispheres.

More advanced students hold their breath and activate the bandhas, the muscle fibers in areas that hold up the body to resist gravity.

“The bandha seals up the energy at the base of the spine, the navel and the throat. When the prana (energy) disperses, you feel as if you can float,” said Hyman.

On the popularity of arm balances and handstands, Hyman explained that they strengthen the shoulder girdle and help one to conquer fear.

However, it can also be an egoistic exercise. Handstands stimulate the solar plexus (the energy point in the upper abdomen) which influences one’s self-esteem, power and ego.

“Handstands look great in photos. People think they are advanced in yoga when they can do handstands in the middle of the room. The advanced yogi can hold a headstand or handstand for several minutes and be still,” she said.

In the end, yoga aims for stillness in the mind and body. It’s not about basing one’s image on the strength of an inverted balance, said Hyman. “You let things go so you don’t get stuck. Open up and let the new come in. This is what is going on inside your mind.”

Asked about the secret to staying young, the 43-year-old teacher replied with a chuckle: “Standing on my head takes away my wrinkles and keeps the gray hair at bay. Get the blood flowing daily. Don’t overeat. Yoga provides the deep breathing that revitalizes the body better than other exercises.”