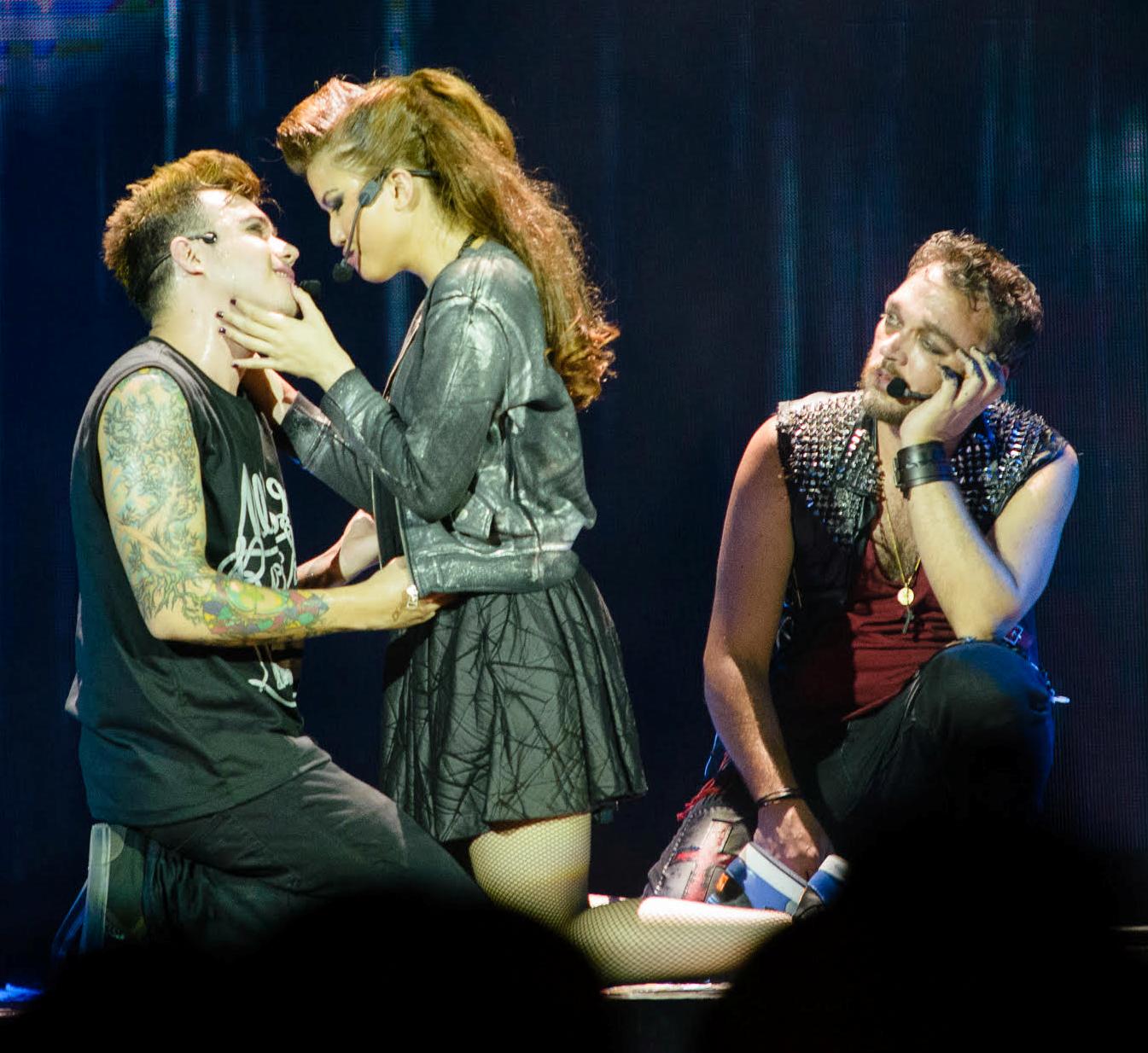 Out of rage and love–a rousing ‘American Idiot’

You don’t have to buy a ticket to see 9 Works Theatrical’s production of the jukebox musical “American Idiot,” now playing at the newly erected Bonifacio High Street Amphitheater until July 10.

Pay a couple thousand pesos and you get a seat in the covered “amphitheater” (really a makeshift stage like the ones built for outdoor raves and concerts). Otherwise, you can easily claim your spot beyond the perimeter railing and watch for free, weather permitting.

“Accidental theater” is what the producers are supposedly aiming for, a chance for those who can’t afford a ticket to still be able to experience this form of live entertainment. It’s an idea that may not sit comfortably with some, but you have to give it to the producers for not giving a (expletive) about what highbrow, elitist
theater may have to say.

Still, here’s some sage advice: Buy a ticket. It’s not enough to just “see” this “American Idiot”; one must “experience” it.

This is what it truly looks and feels like to have rock music make its way onstage and just smash all the rules of traditional theater to smithereens: dazzling neon lights, abstract video projections, the sound blaring overhead, bodies running up and down and back and forth a skeletal set. At some point, you find yourself at a loss as to where to look or what to listen to.

This is theater as sensory overload, a consummate marriage of topnotch production values—which includes Martin Esteva’s lights, Mio Infante’s scenography and GA Fallarme’s projections—and Robbie Guevara’s perceptive directorial choices. After all, one does not simply dive into the heart of a punk-rock musical without a brain and an eye for the proper aesthetic.

Charles Isherwood of The New York Times, in his review of the musical’s Broadway premiere back in 2010, called “American Idiot” “a true rock opera.” It’s not entirely clear what he meant by that phrase, but Guevara’s production, on account of its scope of feeling and thrilling musicality alone, sure feels like an opera.

There’s not much in the way of a story here—three disillusioned suburban American youths dealing with sex, drugs, impending adulthood and Bush Jr.’s warmongering. But my, how astutely it captures the swirling confusion and electric charge that defines this slice of a young man’s life.

It’s the need to satisfy one’s desires and establish one’s place in society that every production of “American Idiot” needs to illustrate to its viewers, and which this one fleshes out in more arresting ways than one.

That’s not to say this “American Idiot” is not without its imperfections. But for every Miggy Chavez (of the band Chicosci), who looks and sounds woefully out of place, or Rivermaya’s Jason Fernandez, who sings alluringly but needs to get rid of his one-note speaking style, there’s Basti Artadi, roaring his way through the role of St. Jimmy, a figment of the lead character Johnny’s imagination now made thoroughly corporeal with this roof-blasting interpretation.

If anything, Guevara’s cast, which also includes Yanah Laurel and Nel Gomez in standout supporting turns, powerfully makes the case for “American Idiot,” the Green Day album that makes up the core of the musical’s score, as one of the new millennium’s essential rock albums.

Under Guevara’s ministrations, plus PJ Rebullida’s hyperkinetic choreography, the likes of “21 Guns” are transformed into genuine showstoppers, while “Holiday,” staged with confetti and balletic rolls of tissue, has become the perfect snapshot of this musical’s wet-and-wild spirit.

“I’m the son of rage and love” goes one lyric early in the show. “I don’t care if you don’t care” goes another, rhythmically repeated.

If only living were that easy, where words and actions exist in a vacuum, and other lives don’t matter. It’s a primal desire of the spirit, one that’s barely spoken of because deemed unacceptable by the norms of society.

It’s also this very desire, this rage and storm of untempered emotions, that pervades this “American Idiot” and make it worth the price of admission.