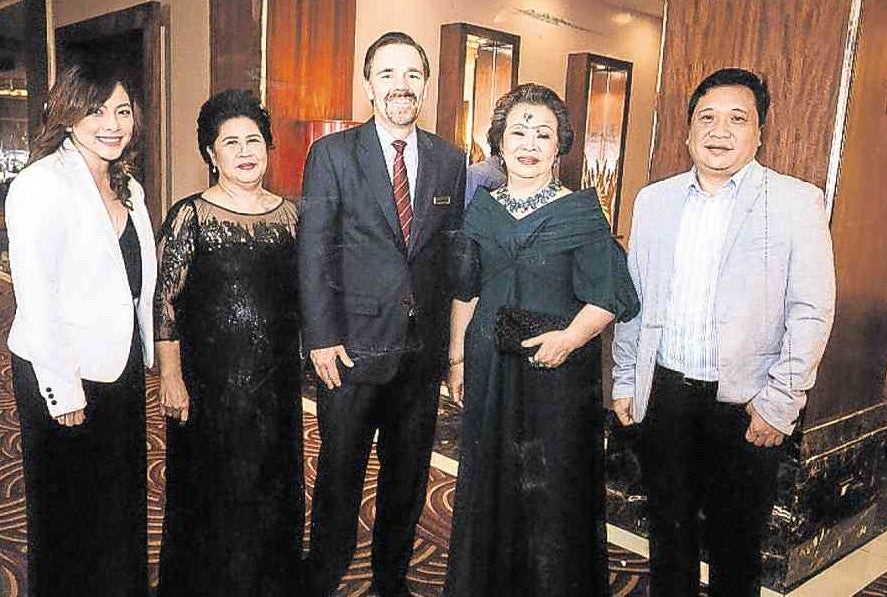 “COME Dine With Me” was the theme of a gourmet dinner of international flavors at the Sampaguita ballroom of the Cebu City Marriott Hotel.

The enticement came from Dr. Vivina Chiu Yrastorza, who collaborated with the hotel’s executive chef Chachpol Suaisom to create a menu with her favorite dishes from varied countries.

Vivina herself is a good cook, and so she and Chachpol hit it off quite well. She explained what she wanted and how it had to be done; he listened attentively, and the result was terrific.

There was also a bit of drama. All guests were welcomed at the foyer, described as the predeparture area where everyone got a boarding pass.

Marriott staff were dressed as flight stewardesses who opened the ballroom doors at a given moment. Seat numbers were indicated in the boarding cards, and also the destinations: Bangkok, Paris, New York, Sydney and Milan.

There was a warm welcome aboard from general manager Patrick Carroll, in his role as the plane’s captain.

Patrick left the voyage in other able hands as it was his birthday, and he was taking another flight to a secret destination.

Vivina addressed the happy gathering of some 50 diners and congratulated Nico Velasquez, the hotel’s public relations officer, for the idea for this flight of fancy. Behind him were the hotel’s director of communications Frances Alfafara and sales supervisor Josef Chiongbian.

I was happily seated in a row that included Vivina, Honey Loop and Ramon Reyes, Unilab’s district manager. Across Vivina sat glamorous Joy Santillan and Cleofe Albiso, the hotel’s director of sales and marketing.

Present was Vivina’s son Pocholo Yrastorza escorting lovely Pamela Fernandez. “They are both dentists,” Vivina said with maternal pride when she introduced them to the guests, mostly from the pharmaceutical and medical industry.

Following the transcontinental menu, first stop was Bangkok for a Thai pomelo and prawn salad, with lime dressing.

Next was Paris for seared foie gras with pineapple purée and a lobster bisque blended with cream and served with chunks of lobster.

After a dalandan sorbet, it was New York for US tenderloin, and then off to Sydney for those creamy and juicy scallops.

Dessert was in Milan with a delicious trio: mango panna cotta, lemon cheesecake and chocolate lava.

To cap the evening, Cleofe Albiso led a toast to Doctor Vivina for her imaginative idea. Since guests had been limited to 50, there is a clamor for another gourmet dinner.

Before the year is over, promised Vivina, and Chachpol. Meanwhile, Vivina is ready to lead a gourmet tour this month. They will visit Rome, Florence, Venice and end up in Switzerland.

La Gondolas, the Italian restaurant of the Waterfront Cebu City Hotel and Casino, was the scene for two nights of parties to introduce the new general manager, Anders Hallden.

He is from Sweden, married to a Filipina. He is no stranger to Cebu nor the Waterfront, as some years back he was the hotel’s executive chef. “This is home,” he said.

The events also served to introduce the Waterfront’s new corporate executive chef, Gianni Sias. He hails from the island of Sardinia.

Anders and Gianni said they will upgrade the menu at La Gondola. There was a sampling of things to come that evening with varied pastas, pizzas, and an impressive assortment of cold cuts, cheeses, olives and more.