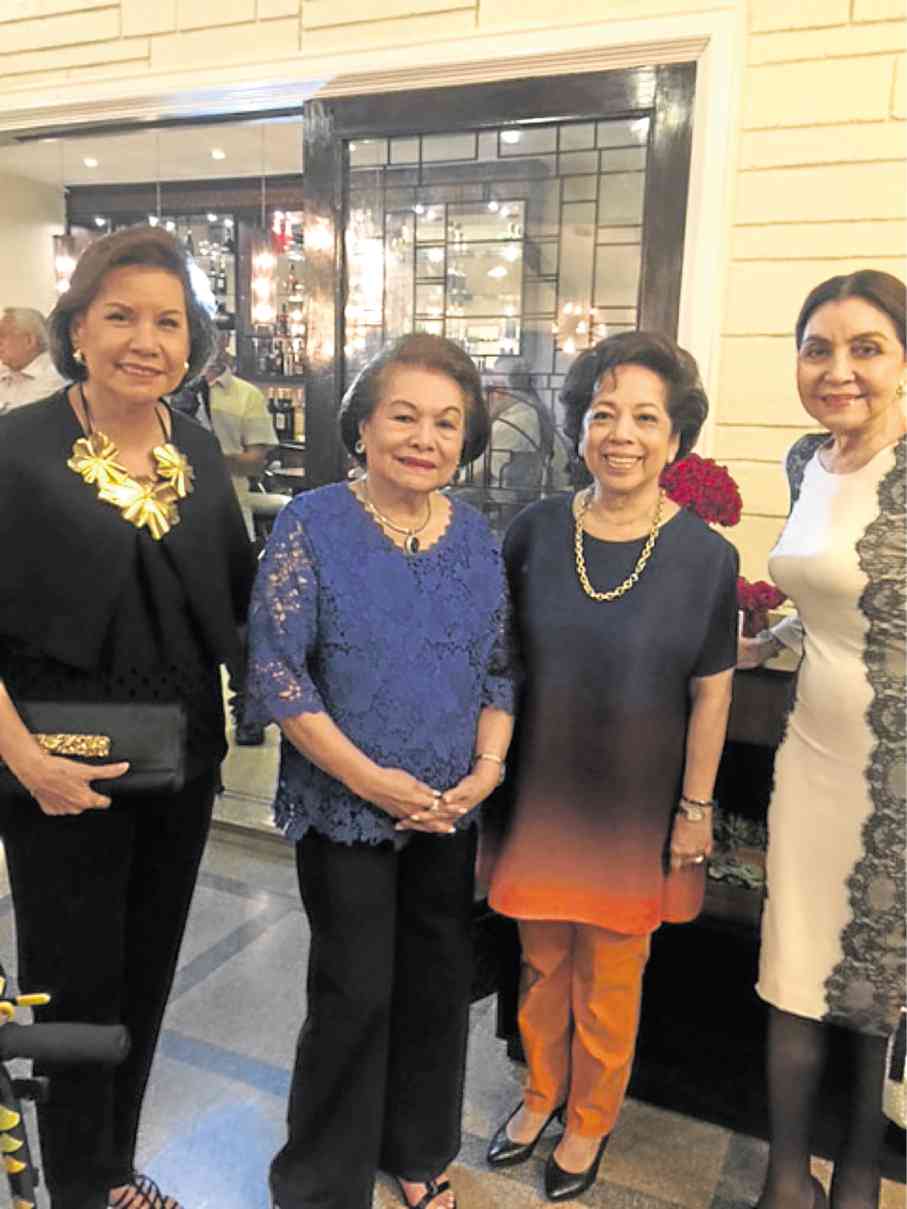 LAST Wednesday afternoon looking at the ’50s house that was slowly filling up with well-heeled Cebuanos, we had a nice feeling trying to recall that around 1987, Mother Teresa was in this house, visiting with the sick.

The nun, who devoted her life to the poor, the sick and the downtrodden in the poorest corners of the world and who will be canonized in September, was in Cebu that year to visit the ailing matriarch of the Aboitiz clan, Maria, who had helped Mother Teresa’s work with the poor in Cebu. She sat at the bedside of Maria Montenegro Aboitiz and comforted her.

The former Aboitiz home is now part of Rockwell’s 32 Sanson development in Cebu and has been transformed into Kayu Kitchen + Bar restaurant.

How often do you see a restaurant in the Philippines open on veritable holy ground? The interesting paradox wasn’t lost on us.

The formal opening drew the Aboitiz family led by Maria’s son Louie, who came with his wife Annie, and Josephine who came with her granddaughter Amanda. Louie and Annie Aboitiz recalled that momentous visit and the years Louie and their siblings were growing up in that cozy home typical of the houses built in the ’50s and ’60s, with the living areas opening out to a spacious lanai and a short flight of stairs leading to the bedrooms upstairs, like in a semi-bungalow.

Annie even remembered the reception of a family wedding that was held right in that house. Amanda recalled how she and her cousins played in the lanai, and up and down the stairs.

The Aboitizes got reacquainted with the Lopez family behind Rockwell, led by former ambassador to Japan Manolo and his wife Maritess, and ABS-CBN chair Gabby Lopez, who all flew in for the significant event. The ambassador came with his sons Mike, who’s also now with Rockwell, and Beaver.

Kayu restaurant will surely be a come-on to 32 Sanson. Cebu is bursting with concept or theme restaurants being opened by chefs, whose fame approaches celebrityhood. Obviously, the Cebuanos, who are fierce entrepreneurs but known to be very frugal, are now living it up and dining out regularly.

Next week another restaurant will have a grand opening, featuring a Michelin-star chef.

Behind Kayu Kitchen + Bar is Cebu’s Alvarez-Sy family—Francis and Marisse and son Francis. Marisse Alvarez-Sy is the owner and pastry chef behind Marisse Patisserie, the bakery across the pool from Kayu.

She was inspired by her mother to bake at an early age. Her 26-year-old son, chef Francis “Izzy” Sy, heads the Kayu kitchen. (Kayu is the Cebuano term for fire or passion.)

Highlights of his menu are the glazed salmon with teriyaki sauce, sushi rice cake, and togarashi, and the Kayu skillet of short ribs, which takes three days to cook.

The interiors were designed by Marisse herself, with additional structural design by Ed and Mirella Gallego, the architects of 32 Sanson.

Opening what is hoped to be a destination restaurant at the garden/condominium development that is 32 Sanson is a masterstroke for Rockwell.

32 Sanson is Rockwell’s first venture in Cebu—a 3.2-hectare spread in Lahug, on Sanson Road, so named after the Sansons, the old-wealth huge Cebu clan that lived in the neighborhood through the decades. (The Sansons, by the way, are related to the Dutertes. See the article “‘Kanto boy’? Duterte is so ‘de buena familia’ (‘sa totoo lang’)” by Gavin Sanson Bagares, published last May 29, 2016, in Inquirer Lifestyle.) But then Cebu’s prominent families have intermarried through generations, like anywhere else in the country.

Rockwell is proud of the fact that 70 percent of the 32 Sanson development is open space—an emphasis on greenery and garden design that distinguishes Rockwell from other developers.

32 Sanson has five residential low-rise (five stories) towers, two of which are completed. In these two towers, only 20 units remain available.

This sales volume isn’t bad for a first venture in a city like Cebu that has yet to embrace condominium living fully.

“Tourism is the next interesting play,” Rockwell president Nestor “Tong” Padilla told us at Wednesday’s opening.

Rockwell, which has been an enviable brand for self-contained, inner-city development, has acquired a five-hectare beachfront property in Mactan, called Punta Engaño.

“We believe in the tourism of Cebu,” Padilla added.

Over dinner, Ambassador Manolo Lopez told us how he has come to like Cebu and hopes to go there more often. He and his wife have just had a most memorable and challenging five-year-and-a-half stay in Japan—a stint that saw much stronger ties between Japan and the Philippines, with then President Aquino visiting Japan about five times, and the Emperor and Empress coming here on a state visit.

The ambassador recalled what he called his “baptism of fire”—when tsunami disaster hit Japan soon after he had assumed the post, and he lost no time in tracking down the Filipinos among the victims and looking after them.

But his tenure ended on a highly significant note—the launch of the coffee-table book on Kudan, the official residence of the Philippine embassy in Tokyo, which has been declared a heritage structure by the Japanese government. People now know it as the ancestral home of Yoko Ono, the widow of Beatle John Lennon who became an icon herself. Yoko graced the launch.

It is also interesting to note that at the 32 Sanson development is a similar vintage structure, what used to be a two-story showroom/furniture factory venture of the Aboitizes called Mehitabel. Rockwell is turning it into the clubhouse of the development.

It is laudable that Rockwell is one developer that doesn’t cut down trees and demolish structures arbitrarily.

For example, along the tree-lined Rockwell Drive in Makati, the harried motorist hardly notices this huge tree in front of the Ateneo Graduate School of Business. It’s not massive, its branches have graceful curves, and its foliage is lush. It blends naturally with the row of trees.

But unobtrusive as it is, it has an interesting, very recent history. This Dita tree was transplanted from the space in front of the Amorsolo building, at Rockwell, to its current site.

“It was blocking the view of Edades, and it was a pity if we did away with it,” Padilla told us in a previous interview, “so we decided to have it uprooted and carefully transport and transplant it in front of Ateneo, where it now stands beautifully.” If I remember right, Padilla even tapped the services of an arborist from Los Baños to supervise the transplanting of this tree.

One tree. This is done at a time in the country when urban development is doing away with nature and heritage structures—with neither expert planning nor compunction.

Padilla’s managerial decision spoke a lot, not only about the company he works for, but also about the kind of executive that he is—very hands-on, very thorough and informed, in short, a professional.

No detail about Rockwell escapes his attention, whether it’s an event in the mall or what’s going on in any of the Rockwell residential buildings. When this 15-ha mixed-use development was being constructed in 1996, it wasn’t unusual to see him looking into every detail of construction, down to the cement finish of the sidewalk. Today, sometimes you listen to him talk about the feng shui of some trees in the Rockwell site, whether it’s good or not, according to geomancers. At 8 in the morning, when your body and mind are barely whole, you could run into him in your condo’s elevator—he’s doing his early rounds of the buildings.

Asked how to define his work of so many years in the prestigious address that Rockwell has become, the former banker told us, “It’s about how to make things work (for the residents, occupants and mall-goers)—the utilities, the streets, water, the electric power supply.”

To this veteran executive, property development is about “winning hearts”; one tries to convert people to a lifestyle every day.

Padilla is one executive who loves to work with and mentor the young. His staff is mostly young. “You just have to know how to harness their ideas,” he said.

He likes them fearless and with boundless energy.

It’s not unusual for this executive to begin his meeting with young new hires, with a question: “How many of you here have been wounded?”

He makes them talk about their wounds, young as they are, and how wounds can make one learn and leave one stronger.

This baby-boomer executive has the near-heroic skill of being able to work well with millennials.