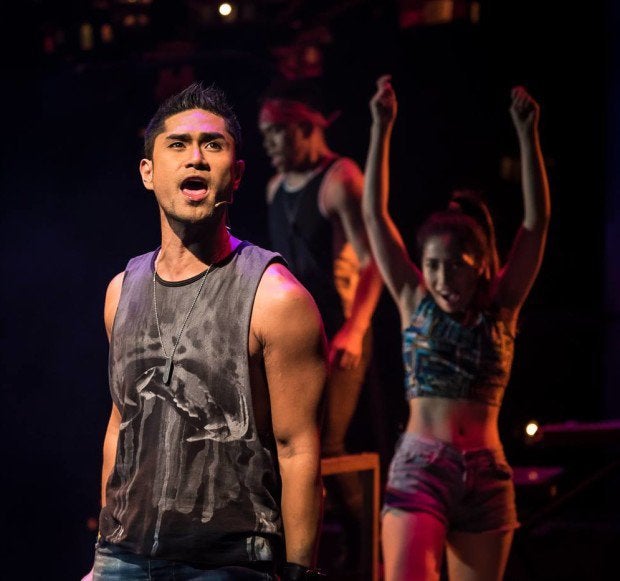 The new President is fighting the wrong war

She is referring to Peta’s “Rak of Aegis,” a Filipino musical that takes off liberally, in fact only nominally, from “Rock of Ages,” the stage and movie musical that showcases the music of iconic bands of the ’90s.

“Rak of Aegis” features the music of the Aegis band in a sort of social comedy, a rock operetta set in a slum community named Barangay Venizia.

“Otherwise,” C. B. continues with sadder eyes now, “it would be too depressing, too close to the everyday realities for many of our countrymen.”

Indeed, throughout the musical, I found myself laughing through copious tears, more and strangely so at the funniest parts.

“Poignant,” says my husband, who couldn’t stop crying and laughing himself.

“Rak of Aegis” is a story of love and survival. It is the story of volatile young love—that of the ambitious Kenny for his neighbor, Aileen, a musical star of promise, in contrast to the deeper love and constant devotion to her of the more grounded character, Tolits.

It is the comfortable, mutually reassuring, well-tested love, unwavering in sickness and desperation, between Aileen’s parents, Mary Jane and Kiel.

It is the sweet and selfless same-sex devotion of Jewel to the self-centered Kenny. It is the love that Mercy, single mother to Kenny and barangay captain, keeps for her lost love, Kiel.

Against great odds, love and human dignity triumph in the godforsaken community.

The musical succeeds in every aspect—story, song, score, singer, cast, characters who, despite varied real-life social statures and professional musical backgrounds (opera, theater, dance), show in their performance a deep sensitivity to the material. Their timing, a big comic challenge, is just perfect.

Thanks mainly to director Maribel Legarda, who keeps the storytelling lean and well-paced and allows the main characters and their alternates to own the roles. Friends have kept coming back for precisely that.

On our night, Alisah Bonaobra, who certainly has the vocal cords but the least training in theater, played Aileen. But because Aileen’s story is close to her own bone, she has mastered it easily.

She was first runner-up in “The Voice of the Philippines.” Like Aileen onstage, Alisah herself became in real life an instant hit in 2014 when a video of her singing Disney’s theme from “Frozen,” “Let It Go,” went viral.

I had hoped to watch the couple, Isay Alvarez and Robert Seña, as Mercy and Kiel, but Shiela Valderrama-Martinez and Lorenz Martinez certainly did not disappoint. Nothing whatsoever made their chemistry suspect.

I had also hoped to catch my favorite standup comic, Jon Santos, in the role of Fernan, the profiteering property developer responsible for the flood-swamped miseries of Venizia. In his place was award-winning thespian Juliene Mendoza, who also appears quite memorably on TV and does radio commercials. I’m not sure if Jon could sing as well, but he certainly will have found a hilarious way to make up for it.

Playing Mary Jane that night was Carla Guevara-Laforteza, whose reputation was undiminished for both presence and voice. She brought out the human strength and vulnerability of her Mary Jane with deeply stirring sympathy.

That night, UP badminton varsity captain and member of the Awit Award-winning vocal group, the Ryan Cayabyab Singers, the buffed-up Poppert Bernadas, credibly tackled the role of Kenny.

His devoted gay friend, Jewel, was played with delicate control by golden-voiced Jimmy Marquez, a Viva Records star. He won the silver prize in the Ninth Best Singer Competition in the Shanghai Music Festival. He sang so beautifully and came across as such a lovable lovestruck young gay of maidenhood grace and selflessness, I wanted to adopt him and bring him home as my second daughter.

The night, however, belonged to the romantic antihero, the reed-skinny Tolits, played by Pepe Herrera, a graduate of the UST Conservatory and an alumnus of Coro Tomasino, who slinked and moved with reptilian ease, bringing the house down and eventually winning Aileen’s heart.

Aegis is set in a flash-flooded, forgotten community whose tragedy is the result of upland logging for profit. The lyrics of the songs and certain aspects of the story have been made to fit the times; it certainly has updated me on the life of the slum poor I had never seen so up-close and personal.

Despite coming closer to becoming nouveau poor than riche, I’ve had little opportunity to meet people like Aileen and Tolits, Mercy and Kiel, Kenny and Jewel, or even the lonely high achiever Mary Jane. Extreme poverty has isolated them from everyone else, as the gated subdivisions have isolated their more fortunate dwellers from everybody else.

And out from poverty is only too obviously what they need. Dad’s even harsher words still ring true today: “In this country it’s a crime to be poor.”

When I see hundreds of people coming from as impoverished a barangay as Venizia, gunned down by law enforcers as drug users or pushers, indeed the obvious crime that needs no proving is that they are poor.

The right war is against poverty, and poverty is a mere symptom indeed of systematic and unmitigated plunder by corruption, official or otherwise.