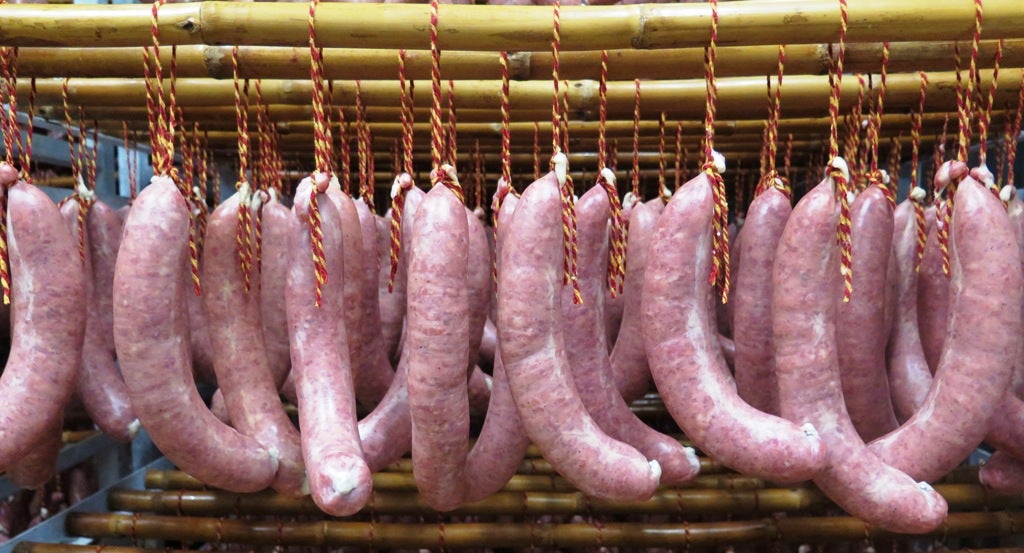 “EMBUTIDO,” or pork sausages, at the Faccsa Prolongo factory in Malaga. Notice the strings in the Spanish colors of red and yellow.

In Spain, pork facilities that can process 6,000 pigs daily

Clean with no smell of disinfectants. That’s the first thing that struck us when we were brought to several facilities in Spain where pork meat was processed into cut fresh frozen parts, sausages (embutidos) and jamon (whole or sliced). The facilities are owned by companies that are part of the white pork sector organization called Interporc (Organizacion Interprofessional Agroalimentaria del Porcino de Capa Blanca), which provides 65 percent of its production to the domestic Spanish market, and the remaining 35 percent for export.

At a meeting at the Ministry of Agriculture in Madrid, our group of Filipino food writers and one TV host were told what kind of pork products were exported to the Philippines and how the organization hopes it could do more business here, seeing that the local producers cannot fully supply demand for the most important animal product in our cuisine.

An interesting fact about current exports of Spain to the country: Offal is a big volume import. And at one facility, Carniques Celra, we were told that a big Filipino chicharon provider imports back fat and skin.

The presentation included economic facts about our country that made members of the group acknowledge we didn’t know anything about the Filipino buying power and import requirements, which can be restrictive because of the long processing time. There is also such a thing as a “listing fee” for food and agricultural products.

Add to these the historical ties in trade we have had with the United States and our neighbor Australia, which have made these countries bigger exporters of their meat products.

Perhaps the Spanish commercial mission should be more aware of branding their products as “Made in Spain” the way the United States  and Australia have been doing with their products.

But interesting for us food writers was finding out that there is an association of professional agricultural journalists. Its president, Lourdes Luriaga, told us that food writing has changed—journalists now have to write about food before it has even reached the table, and also report on health gastronomy, or best practices both in farming and food processing.
I  did notice that my food writing tends to lean in that direction; those are far more interesting to me than reporting on who cooked what and in which restaurant.

Of the facilities we visited, the most impressive was the Carniques Celra in Girona. While all the others explained the same practices—genetics applied to produce the best breed, the special feeds that control fat and create lean and good quality meat, the traceability of each pork slaughtered—it was at the Girona plant where the floor was dry because the slaughtered pigs were kept cool. The architectural design of the plant and its black and red colors were a delight as well.

There is history as well with one of the plants, the Faccsa Prolongo at Costa del Sol in Malaga. The family-run company has operated for nearly 200 years, producing cut pork, jamon and processed sausages or embutido. Asia is one of its biggest markets, particularly China, Korea, Japan and the Philippines.

While food safety is a major concern, safety in the plant is of prime importance as well. This was the lesson learned by Incarlopsa Cutting Plant in Cuenca. When a fire started in its old plant, the burning pork fat was said to be so hot and lethal—probably what it felt like with several tons of chicharon being cooked, we thought. So now, the company has relocated the jamon facility to Toledo and improved the plant layout.

One fact that can blow the mind is how, in only one facility, 6,000 pigs can be processed daily. But with an efficient system and high standards of hygiene, this can be done.

Some of the plants have their own farms or dehesa, while others practice contract farming. But even now, they worry that there might not be enough supply in the future, what with increasing export needs. Well, it certainly won’t do to say that it’s a nice problem.

Meanwhile, I do worry for our own pork industry, the supplies of which have gone down these past years. And can we have the same high-tech infrastructure of the processing plants they have in Spain, including employing robots for mundane tasks?

But, really, basic hygienic practices foremost of all.