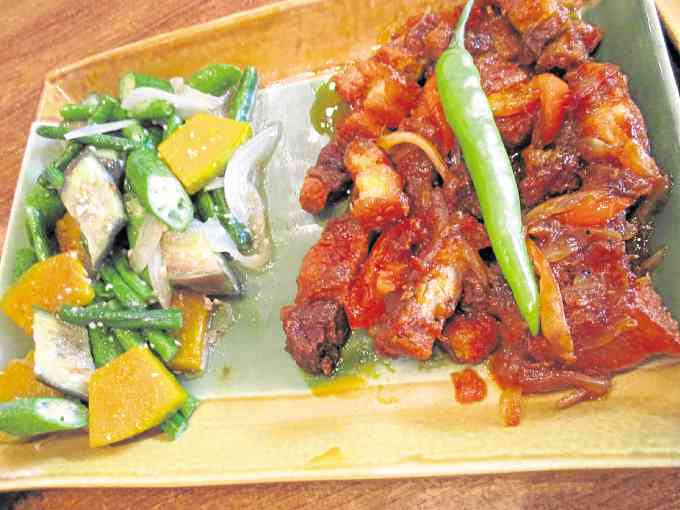 If you’ve ever struggled with carving a thick, unwieldy roll of crispy pata, you should try the dish served at Serye Restaurant.

In its rendition of this Filipino classic, the pork has already been deboned, and the meat cut into neat, even slices. This makes serving crispy pata much more manageable, and eating it more enjoyable. Not only is there no pesky bone to contend with, but everyone also gets equal share of the crispy skin.

No wonder it has won an award in the So Pinoy competition.

Crispy pata is just one of the signature dishes Serye is proud of. Another one is the kare-kare, which has been featured in Food Network and was named best kare-kare in a recent episode of the TV series “Food Wars Asia.”

Considering the effort that goes into the making of this kare-kare, it’s an award well deserved. Like a carefully thought-out deal, all the ingredients in Serye’s kare-kare are well-vetted.

“Everything is made from scratch,” says owner Alvin Reyes Lim. “We make our own peanut sauce, from peanuts which we roast ourselves. We mill our own rice and we toast the rice to thicken the sauce.”

Also, the oxtail and tripe, which come from reliable suppliers, are well-cleaned so there’s no trace of gaminess or lansa, and the accompanying vegetables are crisp and fresh. Moreover, the sauce is made with soup stock the flavor of which has been extracted from long, patient simmering of oxtail and bones.

Perhaps all this fuss to serve perfect Filipino dishes is understandable. Alvin is, after all, a fourth-generation Reyes of The Aristocrat Restaurant fame. His great grandmother is the legendary Aling Asiang, the founder of Aristocrat; his grandmother is Teresita Reyes, otherwise known as Mama Sita, she of the famous sinigang mixes and sauces.

His mother, who was named after Engracia, was the general manager of the Aristocrat franchise of the Mama Sita branch of the family. Going into the restaurant business was therefore a natural choice for Alvin.

After working for his parents’ Aristocrat franchise, he studied at the Ecole des Arts Culinaire et des l’Hotellerie in Lyon, France. During his stay there, he noticed how French bistros served everyday French comfort food amid cozy settings. This gave him the idea to do the same for Filipino food, and thus was the idea for Serye born.

The name is an anagram of “Reyes,” and it also means succession which, says Alvin, is “a continuation of what we learned from our families.”

“We serve straightforward Filipino food made without shortcuts,” says Alvin.

Other signature dishes at Serye are the laing con camaron, binagoongan and Batangas-style chicken-pork adobo, the recipe for which was developed by his wife, Gretchen Consunji-Lim, who is a good cook herself. Customers also go to Serye for the classic bibingkang galapong. Fluffy and perfectly risen, the bibingka is cooked in a charcoal-fired brick oven and is generously embellished with grated cheese and salted eggs.

Serye also sells its own bottled bagoong as well as bread and pastries like calamansi polvoron and lattice-topped pineapple pie made by Manila Bake.

Here’s Serye’s recipe for binagoongan, a hearty dish of crispy pork with a sauce made from sautéed bagoong. Served with a side dish of fresh vegetables, it’s perfect with steaming hot rice, especially on cold, rainy days.

Bagoong may be salty, but in this dish the saltiness is tempered by the sweetness of the sugar and the sourness of the vinegar, thus creating perfectly balanced flavors.

Water, for simmering the pork

In a large stockpot, put in the liempo, peppercorns, salt and onion. Add enough water to cover. Bring to a boil, then lower heat to a simmer. Let simmer until the pork liempo is tender, about one hour.

Remove the liempo from the pot and pat dry with paper towels. Let cool. Reserve the liquid (pork stock) used for tendering the pork. This will be used later on for cooking the bagoong sauce and the side vegetables.

When the liempo has cooled and is sufficiently dry, cut it into half-inch slices. This will make the pork crispier and easier to fry.

Heat the cooking oil in a large wok or frying pan. Make sure the oil is sufficiently hot. Fry the sliced liempo until crispy. Be careful when frying as the oil could splatter. Have a cover for the pan ready and cover the pan if necessary. You may have to do the frying in batches. Remove each batch of liempo as they turn crispy and transfer to a plate lined with paper towels or absorbent paper.

Drain the excess oil from the wok. Add the bagoong sauce (recipe follows) and sauté the cooked liempo until the pork is well-coated with the sauce.

Transfer to a serving dish. If desired, include the bagoong sauce with the pork. It’s good for spreading on hot rice. Serve vegetables on the side (recipe follows).

For the bagoong sauce:

Blend in the bagoong then pour in the vinegar, atsuete oil, sugar, black pepper, finger chili and pork stock. Bring to a boil.

Lower heat to a simmer. Continue simmering until the sauce is thickened and the vinegar is cooked. If desired, thicken with the cornstarch dissolved in water. Use for sauteing the cooked liempo (see procedure above).

Heat the oil in a wok or cooking pan and sauté the garlic until very light brown. Add the onion and sauté until translucent. Mix in the vegetables and season with patis. Pour in the pork stock and simmer until vegetables are tender-crisp. Serve immediately as sidings to the binagoongang lechon kawali.

Be sure to buy liempo that’s whole and boneless.

Before slicing the okra, clean it well. Run the side of a knife along the entire length of the okra to remove the fuzzy exteriors. Cut off the hard ends of the okra.