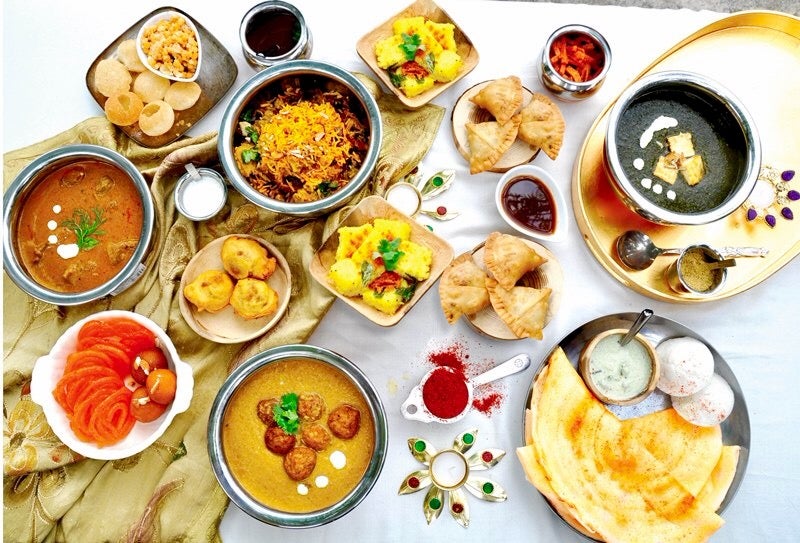 Last Sunday, Indian national Rashmi Dowlani of Saffron Plates whipped up a feast for me.

All I had to do was give her a call. At the appointed time, the food was delivered to my doorstep. I was impressed by how neatly arranged the food was in takeaway containers.

Rashmi owes her passion for food to her traditional upbringing and love for her native cuisine. She was fortunate to have been raised in a tightly knit family, having both grandmothers by her side to show how a real home-cooked meal is prepared.

From her paternal grandmother Devi Dowlani, she learned to appreciate the art of fine food and how to enjoy Indian cuisine.

From Koshi Tourani, her maternal grandmother, she learned all about spices—their basic uses and how the base of every Indian dish is made.

She spoke of how every meal they cooked together would come from a different part of India.

A South Indian meal will always have a subtle whisper of tamarind, while a North Indian one will have the right balance between sweet and spice.

Rashmi’s mother Manisha eventually took charge of the kitchen. The lady, known for her generosity, was first to volunteer her culinary delights. She would bring her dhoklas (semolina cakes), pani puris, masala dosas (Indian street food) and her biryanis to parties and spiritual gatherings.

In no time, her food made her famous. She aptly named her business Saffron Plates—to pay tribute to her spiritual master Swami Swaroopananda (particularly alluding to his saffron-colored robes).

It was her guru’s gentle prodding that led Manisha to acknowledge her gift of bringing joy to people through her food.

Rashmi’s initial participation was to put structure into the business. Later came her desire to make Indian food palatable to all.

Growing up in the Philippines, she is well aware of why Indian food is generally not well received—often percieved as too spicy, too rich or too boldly exotic in taste.

But she makes sure that the food she serves stays authentic, cooked as her family has done so for generations while making it palatable to the public.

She believes that happiness and good food is always best homemade.

I loved the mutton biryani she prepared—light, not greasy, seasoned perfectly and spiced just right. Unlike many biryanis I have tried, (that were, in their own way, also delicious) this left me wanting for more.

In fact, I reheated what was left of it and devoured it again the day after. This is not a common occurrence. Much as I love Indian food, I am usually unable to have it two days in a row.

The hearty mutton, the perfect blend of spices, the bittersweet slivers of fried onions, the twist of fresh cilantro, and the occasional pop of sweetness from the raisins made this dish irresistible.

Rashmi said that every region in India has its own biryani recipe, one just as delicious as the other. Each one is a delight, varying mainly in the use and the combination of masala (spices).

The palak paneer (cottage cheese cubes simmered in spinach gravy) was rounded and not laden with cream. The gravy was pronounced and seasoned to perfection. The homemade cheese was fresh, soft and a delight to the bite.

The dhoklas (semolina cake) is a savory vegetarian delicacy. The fermented batter is mixed with spices and steamed. The soft sponge cake was served cubed, capped with chilies, curry leaves, mustard seeds and enjoyed with chutney.

It was a burst of flavors in every bite. It was something new to my palate. It is one of Saffron Plates’ bestsellers.

Rashmi said that her mom taught their yaya Julianna Laparan (who has been with the family for 30 years) to make dhoklas.

“She practiced making it daily and now, our Filipino yaya makes the best dhoklas in our Indian community,” explained Rashmi.

It is truly wonderful to have all these unique flavors for us to savor!

Home-cooked meals from a family kitchen, made from the freshest ingredients, prepared as they would for themselves, with utmost care and with lots of love.