Philippe and Edna Lhuillierback home from Lisbon for some R&R | Lifestyle.INQ ❮ ❯ 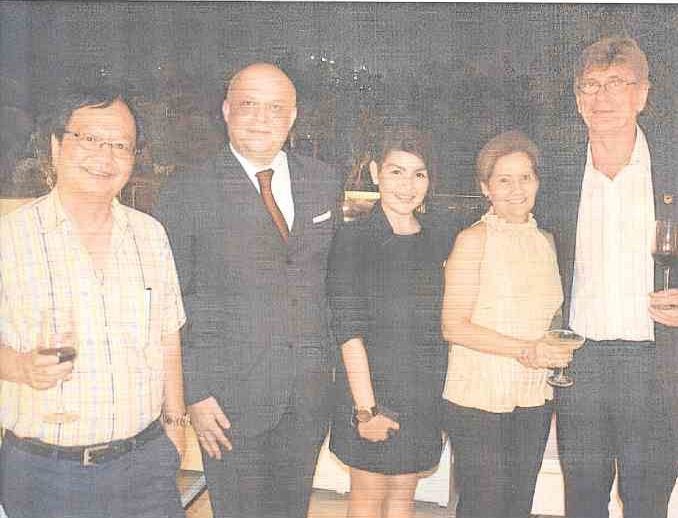 Philippe and Edna Lhuillierback home from Lisbon for some R&R

Philippe and Edna Lhuillier recently breezed into town and gathered friends and relations at their palatial home in Maria Luisa Estate Park. They have just winded up Philippe’s tour of duty as the Philippines’ ambassador to Lisbon.

Rumor has it that Philippe’s next diplomatic posting may be as ambassador of the Philippines to Madrid. Previous to Lisbon, he was assigned to Rome for many years, leaving a splendid record of achievement.

This recent sojourn in Cebu was more to relax and to recharge energies. Assisting him and Edna for this gathering were their pretty daughters Angie L. Miranda, Jacqueline L. Hess and Camille Lhuillier, with their dear friend Geraldine Zialcita.

Champagne and red wine plus assorted cheeses, pate de foie gras, and crispy squares of banana pastry were served at the terrace. Add to these bite-size servings of succulent lechon de leche, brought by Philippe’s brother, honorary consul of France Michel Lhuillier and his wife Amparito.

“They come from Pino,” volunteered Michel, referring to one of his restaurants. “It’s delicious because the piglet is just about a month old, a suckling fed only with milk, as the term lechon implies.”

Present were Philippe’s sisters Angie L. Mathieu with her son Mickey Paulson, and Marguerite Lhuillier who has planned a two-month vacation is Spain before the month is over.

“I’ll go back when Philippe is there,” she promised.

Carlos and Mariquita Yeung, dear friends of Philippe and Edna, were present with their charming guest, Mukesh Parikh, who is from India and resides in Dubai. Also present were Rosebud Sala, Margie Taylor, Johnny and Anna Marie Dizon, Teresin Mendezona and Carmen Campbell.

Conversation ranged from family updates to diplomatic protocol, and the exceedingly humid weather that reigns in Cebu these days.

“It should rain, hard!” exclaimed someone. “No, not yet, I have a project,” said another.

“I’m not worried,” said Amparito, about her birthday on Sept. 23. She is having an all-ladies lunch at the Tin Gau, the best Chinese restaurant, at the Waterfront Cebu City Hotel.

“Thank you for coming,” he told his guests. “This is the hotel’s first Consular Night, and we’ll have more in the future. Next time it will be in a place you never imagined nor seen before. It shall remain a secret.”

It was Seafood Night at Treff, and on the buffet was a 38-kilo tuna being cut into sashimi, plus exquisitely marinated salmon and inky squid risotto, among many other things.

Dr. Alonso wishes to remind those concerned that the next fellowship of the Cebu chapter of La Chaine des Rotisseurs will be on Sept. 30 at Pino Filipino restaurant. General manager Joel del Prado is preparing a menu of Spanish dishes.

Everyone hopes he includes the Pino lechon de leche, which is reminiscent of the cochinillo asado prepared with month-old suckling pig in Segovia. That’s the city in Spain famous for its Roman aqueduct, built more than 2,000 years ago. It continues to supply Segovia with water.