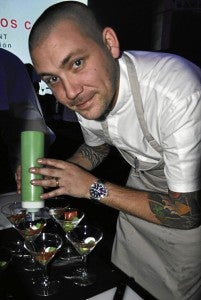 THE KITCHEN had water baths with a digital read-out in each of them. And into those went vacuum-sealed food—meat, seafood, vegetables, fruit.

That isn’t as simple as it sounds. And Ryan Clift, chef of The Tippling Club in Singapore, was rather specific about the temperature and the time for each of those packs to be done—a way of cooking known as sous vide, or its technical name, immersion circulator.

The medium is water, “the best medium for heat,” said Clift.

We were at the Epicurean Lab, the experimental kitchen of the Global Academy in Makati, one of the many culinary schools in the country. Chef Rob Pengson, one of the founders of the school, welcomed the participants to the “Sous Vide and Avant Garde” cooking sessions held the last week of May and conducted by Clift.

Pengson described the Lab as “an open avenue for sharing” where other culinary schools can do their experimental cooking and share their findings with other schools. And some of them were there to attend both the lecture-demo and to participate in the hands-on portion.

The Epicurean Lab reminded me of Spanish chef Ferran Adria’s Taller (pronounced “tal-YEH”), a workshop where Adria and his chef collaborators did many “experiments,” some of which are served in his famous restaurant, El Bulli. The question probably in my mind was whether we were going to learn how to make Adria’s foam, warm gelatin, gelified ravioli.

Ryan Clift has been cooking since he was 14, first in his native England, then through France and, before Singapore, at the highly rated Vue de Monde in Australia. It’s about seeking out the best chefs and learning from them, he said—the advice he gave to budding chefs who attended.

I first met Clift at the Madrid Fusion welcome cocktails where Singapore chefs displayed their avant-garde creations. He offered coffee-cured ocean trout and clams in a hot fluid gel of dashi. When I told him I was from the Philippines, Clift said he was scheduled to give a demo in Manila.

And so there he was, still sporting his close-cropped hair and colorful tattoo on both upper arms. He did a variation of the Madrid Fusion offerings, using salmon instead of trout and combined it with the hot dashi fluid gel. 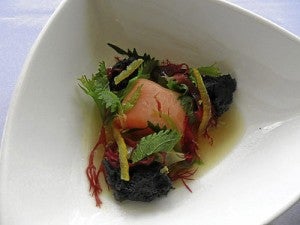 Whatever you call this new cooking concept—molecular gastronomy or avant-garde cooking—it requires machines and some food chemistry products. Apart from the sous vide cooker, there’s the microwave, vacuum sealer and Thermomix (a hyper food processor that not only can blend and grind but also can weigh, knead, steam and even cook), along with the conventional oven and griller.

Some of the powdered products used were agar and kappa carrageenan, made from natural products like seaweeds. There are exotic names like xantham gum and gellan, made from bacterial fermentation and excretion from leaves. And then there is liquid nitrogen that Clift emphasized has to be handled carefully and requires training to be used safely.

Having been doing sous vide in his restaurant and in his demos around the world, Clift finds it easy to rattle off just at what degree and for how long each vacuum food is immersed in the water bath. For his salmon dish, it’s exactly 45.5°C for 12 minutes. For the wagyu sirloin, it’s 54°C for one hour and 45 minutes. Pigeon has to be 82°C for 12 hours. Beef cheeks need to be done for 48 hours at 72°C.

Stopping the cooking requires an ice bath after. Storing is handled in the refrigerator.

Beef cheeks were Clift’s example on how second-rate meat could be fashioned into high-end dishes. First, he did a ravioli made of beetroot skin from beet root juice added with gellan gum (a stabilizer) to make sheets that solidified right away. Those can be fashioned into any design (packets, knots, pasta strips). The ravioli was a packet for the beef cheeks that kept their shape even when heated up to 70°C, which he did in the oven. 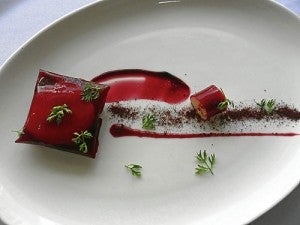 What chefs learned from the sessions was more than just recipes, or the precise degrees and length of time to sous vide, or even the proper way to use many of the tools used in the new kitchen. Sous vide, Clift said, gives perfect results, the outcome is always consistent, and there is very little lost in the cooking.

That means the methods can save on food cost, can give more servings for the same amount of ingredients, and is easy enough to do even by a trainee as long as the formula is followed to the letter. And because food can be cooked way ahead and stored, it should be perfect for catering operations.

The new things I learned about Ryan Clift is how he hardly uses salt to season because salt, he said, leaches out the moisture from the ingredients, and there is natural salt in many of the things we eat. With the new methods and machines, he said he can make vegetarian and vegan meals, making eggless mayonnaise, for instance, possible.

My lingering memory of the sessions was tasting the green curry puree for the pigeon dish—the flavors were intense but you could discern distinctly the green peas, curry paste, lime juice and coriander leaves in the recipe, helped to be formed and stabilized no doubt by one of those powders, then processed in the Thermomix.