How Conrad and Zsa Zsa got back together–quietly | Lifestyle.INQ ❮ ❯ 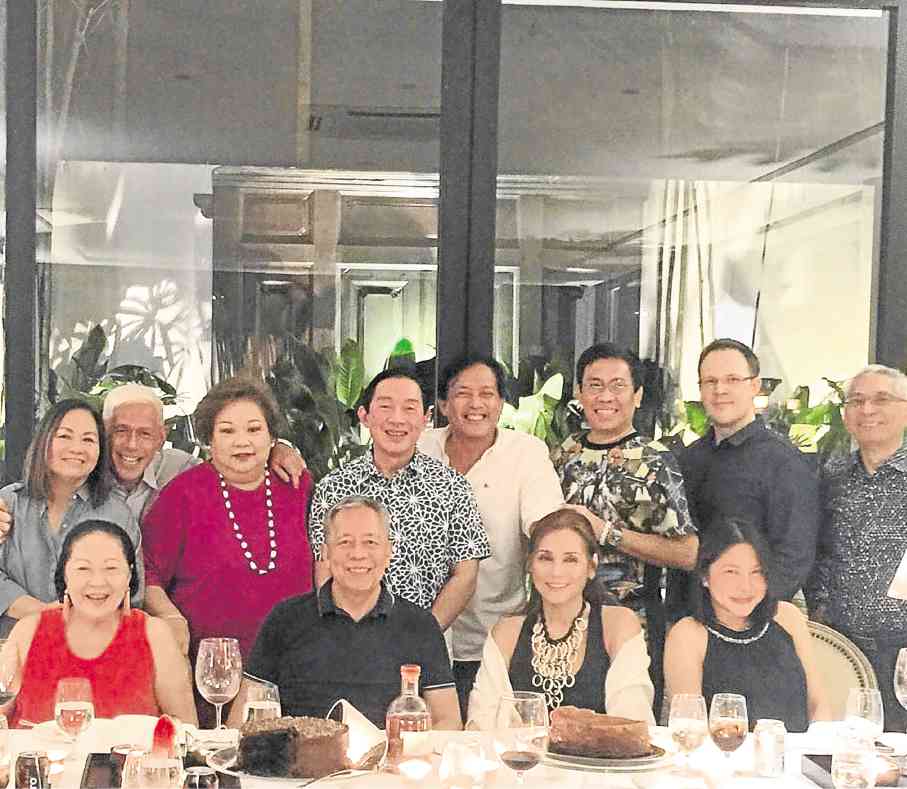 Conrad Onglao, center, inwhite shirt, with his friends at “move-on dinner” he hosted in his home; as it turned out, he kept the hope that he and Zsa Zsa would still get back.

How Conrad and Zsa Zsa got back together–quietly

If the “EJKs” are the bad news that just can’t be simply swept under the rug, the Zsa Zsa-Conrad love affair is some good news that people can’t seem to get enough of.

It’s been about five months since news broke out that the couple had broken up, their “kilig” love story having been lapped up by showbiz fans and non-fans, including the “ex-es” of Conrad. Now last week the story surfaced that the two are back, and are applying for a marriage license, to boot.

Would you believe that in the middle of the night—as in 1 a.m.—I got a text message asking if the “reconciliation” was indeed true. Other than the Duterte-Philippines’ reconciliation with China, I didn’t think then any other reconciliation mattered enough to shake one out of her sleep.

But apparently to some, the romance between the showbiz celebrity widow and one of the country’s most sought-after architects is exciting enough to monitor, like it were our business.

Yes, the two are back and now prefer to keep the story of their rekindled romance private. In fact, it seems there’s no need to rekindle because apparently, it never died.

A chance to talk

How did the two reconcile?

Their paths crossed—literally. One afternoon more than a week ago, Conrad was walking in a Makati mall and ran into Zsa Zsa. They greeted each other and Conrad saw that as a chance to ask if they could talk, because they needed to talk. If you know your Conrad-Zsa Zsa timeline, you’d note that the two never got to talk—Zsa Zsa just upped and left, leaving Conrad at a loss.

READ: Now that Digong’s been elected–so why did Zsa Zsa and Conrad split up?

That fateful afternoon, the two sat down and talked—for hours and hours.

That was when they kissed and made up, and decided that they would give their relationship another chance, but this time, in utmost privacy and quiet.

“We know that privacy is the luxury we want to enjoy,” Conrad told me the other day after I asked him if they had really reconciled.

Unlike during their split which got the gossip mill grinding with rumors that proved unfair to both of them, this time the couple want to enjoy some peace and quiet—even from Conrad’s friends like us.

Some time ago, their “breakup” became well-read news after Zsa Zsa refused to go back to Conrad’s home, the most-featured home they had shared for some reasonable time, and told her assistant that she would not go back. Even as the news broke, Conrad was left at a loss wondering what the cause was. And this happened barely a month before they were to get married, and after Conrad had gifted Zsa Zsa with a “promise” Cartier ring and an engagement ring.

During their relationship and after this separation, Conrad had always been vocal about what he felt—“She’s the best thing that’s ever happened to me,” he’d tell us, and proceed to recall how he liked their simple routine: home, “Asap” show (on a Sunday), Sunday Mass, gym, Saturday Salcedo market, family lunches or dinners.

He told us then, about his many failed relationships and finally, how he’d found Zsa Zsa: “It’s been a long journey but in the end it was worth the wait.”

He loved her “simple, down-home ways,” despite her celebrity-hood and felt that she’d be the one he could “grow old with.”

Over our lunches, Conrad would love to brandish his senior card and say how proud he was to be a senior, and how he was looking forward to getting married (he’s divorced, with two sons). “I have long wanted to get married. That has always been the goal,” he’d say then.

That was why, when Zsa Zsa left, he was at a loss. The morning after she didn’t return, he sent over to her house some chicken broth, thinking that she was just sick and trying to recuperate. A few days later, he sent flowers and a letter asking her what happened and if, whatever it was, they could talk things over.

He made other attempts to reach out to her, even dropping by her house, and asking friends to intercede—but all for naught.

We had never seen Conrad at a loss, at any time of his life, more than after that separation. And all that time he kept saying, “I will fight for it. It (the relationship) is worth it… If she doesn’t love me anymore she can tell that to my face, but until then, there’s hope.”

Finally, when Zsa Zsa didn’t respond to his attempts, friends prevailed upon him to give up and “to move on.” So one Saturday night, he cooked adobo and asked his friends over to his house for a “move-on dinner.”

That was quite funny, we said, because guess what we ended up talking about at that moving-on dinner? Still Zsa Zsa.

Therefore, when the two finally got to talk recently and agreed to thresh out whatever issues kept them apart, it must have been the sweetest reconciliation ever.

Now, the couple is working on their relationship quietly. Hereon, no news must be good news.

In the meantime, just content yourself with all the bad news.