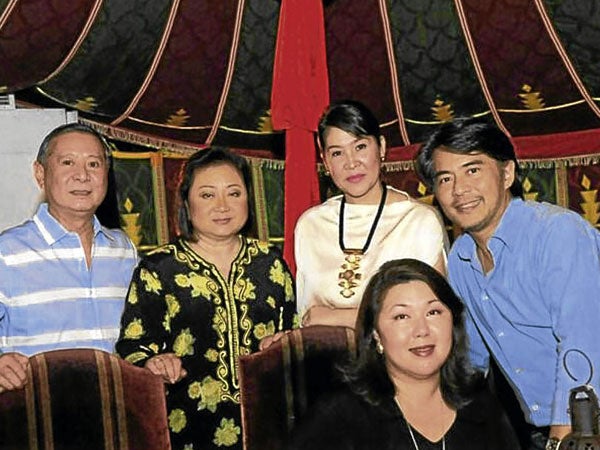 THEY HAVE been dearest friends for eons, dahlings. So when Philippine Tatler publisher and Harrison Plaza’s Irene Martel Francisco celebrated her birthday recently, her pal, Rustan’s president Nedy Tantoco, hosted a fabulous Moroccan-themed dinner at the sprawling garden of her Forbes Park residence, complete with a tent straight out of “A Thousand and One Nights.”

The bash, put together with help from Nedy’s sister Marilen T. Jalbuena, even had waiters in Moroccan outfits and fez hats, dahlings. Irene’s in-demand cardiologist husband Randy Francisco and daughter Isabel, plus tons of the celebrator’s pals, were all there.

Cocktails and a table full of mezze finger food were filling enough for a dinner menu. When we entered the tent, we felt like Middle Eastern royals, palanggas. We were served the awesome Moroccan dinner prepared by Loubna Piega and Nedy’s own kitchen staff, which included lamb couscous and chicken tangine washed down with choices of cold champagne; red and white wine, followed by the calorific Mango Flambé dessert; and mint tea, to help settle all that gastronomic splurging.

Before the toast to the birthday girl, a surprise belly dancing number was presented by a group led by Jill Ngo-Crisologo, dahlings. Then, collective cheers for Irene were led by hostess Nedy and her partner Patrick Jacinto, after which we were persuaded to work out the calories we put on at dinner by interacting with the belly dancers.

Yes, palanggas, it was indeed a page out of the Arabian Nights, thanks to our hostess with the mostest, Nedy Tantoco!

Fashion Watch is back in the scene and better than ever, palanggas.

Starting it with a blast was Cebu’s pride, Jun Escario, who debuted in the show with a collection of elegant cocktail pieces that mixed and matched different materials and colors.

The lobby of Shangri-La Makati was packed, dahlings, and Jun got a standing ovation from this chi-chi crowd.

Fashion Watch has model Grace Molina as project coordinator and Inno Sotto himself as creative director, dahlings. What a blast!

Three of Manille nightlife’s most dynamic personalities came together for collective birthday celebration at Opus, the premier restaurant and lounge at Newport Mall Resorts World in Pasay, dahlings.

Popular PR guy Stephen Ku celebrated a new chapter in his life, along with Manila’s number one DJ, Manolet Dario, and gorgeous model Ornussa Cadness. The three got wishes and toasts from their friends for “another year of life, success and revelry.” Opus co-owner Stephen threw a sumptuous dinner prepared by master chef Carlo Miguel.

Once dinner was over, it was time to go on a roll and shake those calories away with DJs Kerwin Yu, Bombi Balquiedra, Katsy Lee and Marie Garcia doing the spinning. They kept the birthday trio’s invitees dancing and socializing till the sun was literally out! Now, that’s what partying on the fast lane is all about, dahlings.

The sun shone bright and the drinks were soothingly cool when one of the country’s top conglomerates, Robinsons Malls, led by its president and COO Frederick D. Go, top national and local retailers, food chains and service centers to the Robinsons Place Palawan Tenant Conference, held at Emerald Playa Beach and Nature Park in Puerto Princesa City, Palawan, palanggas.

“Set to open by November of this year, Robinsons Place Palawan is the first full-service mall in Palawan and the 31st mall in Robinsons Malls’ growing portfolio of full-service and specialty malls,” said Arlene G. Magtibay, RLC-Commercial Centers Division GM.

“With the stunning Puerto Princesa as its backdrop, Robinsons Place Palawan is designed with a massive glass façade and an al fresco area for dining. It will have over 30,000 square meters of gross floor area. The two-level shoppers’ Mecca will have a wide variety of retail shops and restaurants as well as entertainment and recreational facilities, and will be the only establishment in Puerto Princesa that will have state-of-the-art cinema facilities, including 3D cinema,” she added.

The exhibit, “Romanza!,” will be the opening act of Mes Filipino, highlighting the 113th anniversary of Philippine Independence, the 150th anniversary of the birth of Dr. José Rizal, plus Philippines-Spain Friendship Day, with Filipino talents from the Philippines and abroad flying in to partake in the celebration.

“Romanza” is also a poetry book launched in 2009 along with Marivic R.’s artworks. Poetry is by National Artist for Literature Virgilio S. Almario, translated by poet Marne Kilates. The opening event will have a poetry reading from “Romanza,” palanggas.

The exhibit runs June 9-30. If you’re in Madrid, check it out and be proud of our very own Marivic Rufino!