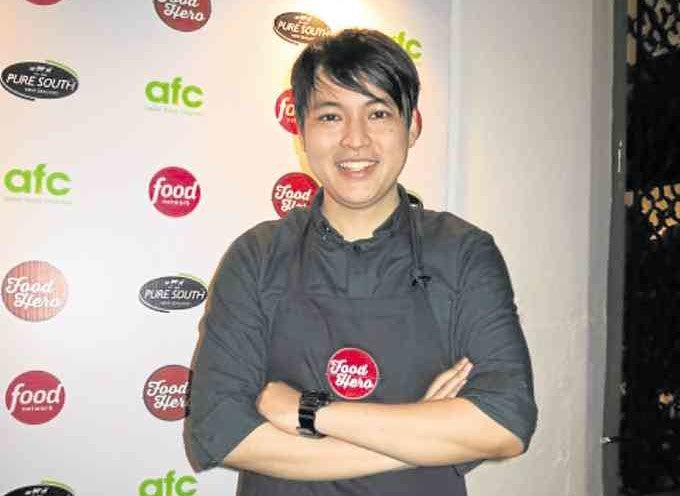 It was grace under pressure.  During the finals of Scripps Network’s “Food Hero” competition last month in Singapore, the four contenders were all smiles, cracking jokes and dishing out witty answers to questions from media.

And though all four finalists—Anton Amoncio of the Philippines, Farris Danial Abdul Rahman and Koh Kay Kim of Malaysia and Pattaya Benjavari of Thailand—had just met one another, they instantly became friends. Already they had agreed that whoever won that night would treat the rest of them to dinner.

Even when time came for them to prepare recipes, they all remained unflustered amid the nosy and noisy crowds.

It may be because by this time they had already honed their skills, what with five weeks of rigorous challenges and elimination rounds they had to undergo.

First they had to submit an audition video. Then to further test their hosting skills and onscreen personality, they were asked to produce and edit videos of their search for great eats under US$8 in their respective hometowns.

They were judged based on their personality, appeal and ability to create original and engaging content, by a panel of production and creative experts.

While all four may possess those qualities, in the end it was Filipino chef Anton Amoncio who was declared this year’s Food Hero.

And no one was more surprised than Amoncio himself (see stories in Inquirer.net, Oct. 20, and Inquirer Lifestyle, page E1, Oct. 23).

“I feel like I just won the lottery because I had only one chance in a million,” he said in a post-event interview.

Not only is he Asian Food Channel’s new Food Hero, he’s also the first Filipino and the first male to win the title.

It’s quite an honor for a 27-year-old who at first considered making music his career. It was only after a few semesters at College of St. Benilde that he decided to enroll instead at the Center for Culinary Arts in Katipunan, Quezon City.

He doesn’t really know what tipped the competition in his favor, because the others were equally good and articulate, added Amoncio.

Maybe one factor was the palpable passion he exuded for food and cooking, as well as his exuberant personality. Quick to smile and answer questions, he was an only child who grew up mostly among adults.

He remembers savoring the home-cooked meals of his grandmother.

Among the dishes she would cook was chicken tinola, using native ingredients such as malunggay and papaya.  It was this recipe, given Amoncio’s own spin, which he prepared for his audition video.

“The video allowed me to share my food story,” he said.

It’s a story that will continue to unfold as he assumes his new role. Already he’s expected to join Scripps Network’s roster of talents, just like past winners Sarah Benjamin, Debbie Wong, Michelle Lean and Ili Sulaiman, who now have their own shows on the Asian Food Channel and Food Network.

Here, Amoncio shares his recipe for Cheesy Lamb Rack Kaldereta, which he prepared during the finals.

It’s based on one of the bestsellers at Antojos, his restaurant in Quezon City (now temporarily closed).

The dish is made aromatic with the use of chilies, bay leaves and cinnamon stick. The “cheesy” part comes from the topping of Mornay sauce.

I’ve kitchen-tested the recipe and found it hearty and delicious, even without the Mornay sauce. This will most likely be a family favorite.

(Recipe of Anton Amoncio for the finals of “Food Hero” 2016)

Pinch of salt and pepper

For the Mornay sauce:

Salt and pepper, to season

Trim off the excess fat from the lamb. In a bowl place the lamb cutlets and pour in the vinegar, salt and pepper to brine the lamb for about 30 minutes.

In a large pan, heat the oil and toss in the chilies. Fry until the chilies are aromatic. Transfer chilies to a small plate.

Sear the lamb cutlets in the same pan, browning the meat on both sides. Make sure the pan’s temperature is constant. You may have to do this in batches. Do not overcrowd the pan as this could lower the temperature and keep the meat from browning evenly. Remove the meat from the pan and set aside.

In the same pan, sauté the onions and garlic until fragrant. Toss in the cinnamon stick, peppercorns and bay leaves. Return the meat and the chilies back into the pan and add the brine used for the meat (vinegar, salt and pepper), the whole peeled tomatoes and the tomato paste.

Stir in the water and bring to a boil. Once it starts boiling, cover the pan and turn the heat down. Cook for another 15-20 minutes. Add the potatoes.  Cover and cook for about 45 minutes to an hour or until the meat is tender.

Add the bell peppers and peas and cook for another five minutes. Just before serving, spoon the Mornay sauce on top.

To make the Mornay sauce:

Melt the butter in a pan.  Blend in the flour, stirring until smooth. Whisk in the milk and simmer, stirring continuously, until the sauce turns thick and creamy. Reduce the heat and stir in the cheese. Continue stirring until the cheese melts completely. Season with nutmeg, salt and pepper. Spoon the sauce over the lamb kaldereta just before serving.