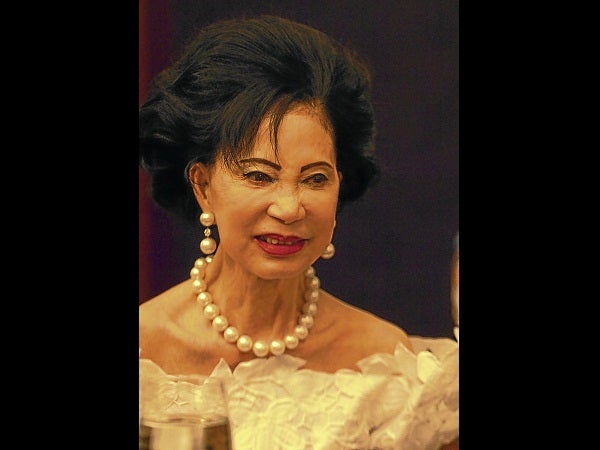 Imelda Cojuangco gives thanks for miracles 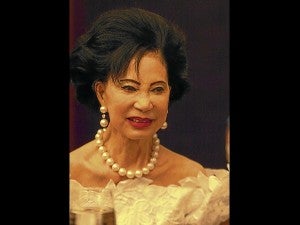 The press fell into a hush when philanthropist Imelda O. Cojuangco teetered into the Makati Shangri-La function room. Perennially sylph-like, she came in her signature style, clad in a white off-the-shoulder dress adorned with lace cutwork and a flounced hemline, matched with pearl jewelry.

Instead of the signature flower in her hair, she wore a chunky, silver coiled cuff with a big rose. Her hair was pulled back and coiffed to reveal delicate features highlighted by black liner and bright red lipstick.

“Hello, kumusta po kayo?” she acknowledged everybody in her whispery voice.

The occasion announced the activities of the Cofradia dela Inmaculada Concepcion Foundation, a charitable organization that not only subsidizes the Grand Marian procession held every first Sunday in December in Intramuros, but also the First Communion of underprivileged children and  the restoration of churches such as Sta. Ana.

“The aim of the Cofradia is to promote the devotions of the different titles of the Virgin Mary. We are celebrating the No. 1 feast of the Catholic Church, of the Patroness of the Philippines,” explained Conrado Escudero, chairman of the procession and comite de festejos.

In the late ’70s, after martial law, Escudero was helping out Dr. Jaime Laya, then head of the Intramuros Administration. Laya pointed out that Intramuros was the religious center during the colonial period and wanted to revive a major tradition. After research, Escudero cited the Immaculate Concepcion as the Walled City’s biggest fiesta. He then commissioned sculptor Amado Yuson to create the icon.

By tradition, the Grand Marian procession was conducted by the military and the Ateneo de Manila.  The military cooperated by parading in plain clothes so as not to give the impression of Martial Law.

“We wanted it to be old-fashioned—typical novena and fiesta and totally nonpolitical. At that time the rallies and processions were political,” recalled Escudero. “We started with six images; now we are fighting to maintain 80 images from all over the country, with all the rituals.” One of the highlights is the traditional Turumba dance from Pakil, Laguna. 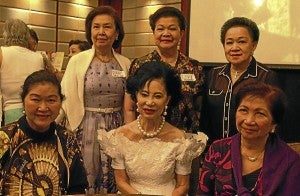 Laya said that for the event to continue, it had to be subsidized by the private sector. In 1980, Cojuangco became the founding chair of the Cofradia dela Inmaculada Concepcion and its real-life icon.

She sat at the head table between Cofradia president Aurora Eizmendi and  Bootsie Violago who, with her husband Oscar, are sponsoring 1,000 first Communicants. The table included the hermanas mayores Lory Yulo, Cor Yulo Ebdalin and Baby Javelosa.

Earlier, the media was told that Cojuangco’s health was fragile. To prevent any risk of infection, she had to avoid close contact. “No kiss-kiss!” cautioned Marietta Santos, hostess of the press conference of the annual Grand Marian procession.

It prompted society columnist Johnny Litton to jest: “What you can’t do to her, you can do it in me! Twice!”

Cojuangco seemed to be in good health as she savored the Japanese meal and conversed with the guests at her table. When it was her turn to read her speech, she apologized for her hoarse voice. “Some of our friends have names like Concepcion, Rosario, Lourdes, Carmen, Amparo, Soledad. They are named after the Immaculate Conception, Our Lady of Lourdes, Nuestra Señora del Carmen,  Nuestra Señora Desamaparados, Nuestra Señora del Rosario… All these patronesses will be in the procession.

She went on: “The most venerated images will leave their homes and join us on this special Sunday, Dec. 3, on richly decorated carrozas accompanied by multitudes of devotees.”

Cojuangco pointed out: “I like to believe that with the Intramuros procession and all its activities, the Cofradia has succeeded in  reinforcing the  spiritual development among our countrymen,  intensifying devotion to the Blessed Mother and contributing to the easing of social anxieties, particularly among families and children, now challenged with separation arising from overseas employment of one or both parents.

“On this special occasion, we pray that Our Mother will cast special, loving eyes on our countrymen who toil overseas, and on millions of children who are left behind.” 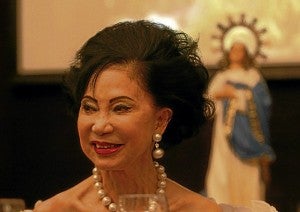 As Cojuangco was about to take her dessert, Inquirer asked about the miracles in her life as the fruit of her devotion to Mama Mary. Her answers were sweet but very familiar.  “I had a very good, very loyal, very loving husband. Not one of my children took drugs or went with bad friends. They were all nicely brought up. That’s a miracle already. I’m so happy with my family, my grandchildren. Every Saturday we bond. They’re cousins who have grown up like brothers and sisters. No problems…”

She recalled: “Seven years ago, I had a very bad heart, which I did not know. I came from a retreat. When I got home, I felt bad.  I had to lie down. There was a telephone beside me. I didn’t know how to call my household helpers. I live alone because all my children have settled down.  After half an hour, the maid came in. ‘Ate Mel’—that’s what they call me—‘my mother is sick.’

“I couldn’t talk. I just said, ‘Talk to my brother, Ting.’  I called up my brother. He instantly brought me to the hospital. I pleaded, no operation. They found an aneurysm. They wanted an operation. Since I had told my brother that I didn’t want one, it was hard for him to make a decision. But he promised me. I was in the ICU for six months and the doctors passing by would say, ‘She will go.’ I mean, I was going to die. But I did not. It was a miracle. They thought I was not strong enough to hurdle the aneurysm. That’s a miracle.”

You could say that Cojuangco has been living on the blessings and good wishes of people whom she has helped unconditionally. Escudero explained: “We are adhering to our mission to help the poor and to get the devotion to the masa. We have helped many charities, to which Ms Cojuangco would always say, ‘Don’t tell anyone.’”