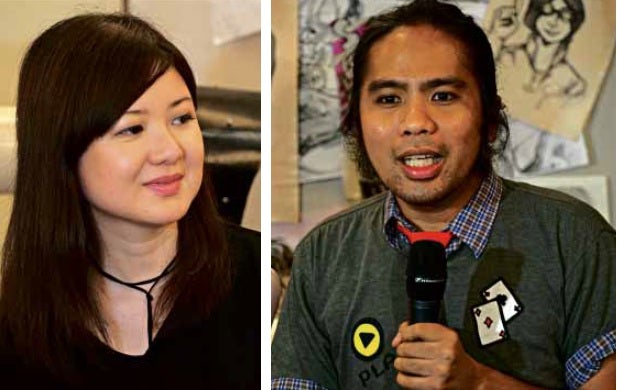 Lessons from the creators of ‘Saving Sally’

It’s not the first time someone wrote a story that would become the basis for the screenplay. The idea isn’t exactly unheard of; countless pieces of classical and contemporary literature have been adapted into motion pictures. There’s a vast assortment of book-to-movie adaptations to feast on, from Robert James Weller’s “Bridges of Madison County” to Neil Gaiman’s “Coraline.” In the Philippines, however, something like this is more often than not a dream sequence that you can only read about in books. It’s not easy to produce a top-rate film–an animated one at that–unless you have funding from major studios. In the most wondrous of ways though, it has happened.

“Saving Sally” is a dream come true for writer Charlene Sawit-Esguerra and director Avid Liongoren. As Charlene writes in her blog Field Trips to the Real World, she and Avid had “a sporadic friendship, characterized by involved and, at times, brutally honest conversations” which started when they were classmates in the University of the Philippines’ College of Fine Arts. One of the things they used to talk about even then was making a movie.

Charlene started writing the story “Monster Town” in 2002, whose title would later be changed to “Saving Sally.” This is the story that would be adapted into a screenplay and then into the full-length animated film that was chosen as one of the Metro Manila Film Festival’s (MMFF) Magic 8.

The selection of feature films in this year’s festival sparked controversy and raised a number of eyebrows, for it only included independently produced films, “Sally” included.

“Saving Sally” is an ambition that took a decade to fulfill. Initial filming began in 2005 but was put to a halt due to funding and production constraints. When French producer Alain de la Mata came into the picture and offered to help with the production, Anna Larrucea, the actress who originally played Sally, was no longer available. Auditions for a new Sally were conducted and Rhian Ramos was cast as the new heroine. Everything had to be done all over again for the reshoot.

The film has been rated A by the Cinema Evaluation Board, which basically means that it adheres to the highest standards in the following criteria: direction, screenplay, cinematography, editing, acting, music scoring, sound and production design. It also combines live action and real characters with animation–something that the local mainstream cinema hasn’t successfully ventured into.

Seeing the trailer of “Saving Sally” and how promising it is, one can’t help but wonder who the masterminds are behind this project, and if there’s a special formula for their exceptional creativity.

Inquirer Super was given the opportunity to chat with the writer and director at the film’s presscon.

What do you think nurtured your creativity when you were younger?

Charlene: I think, because I grew up in Tarlac in the ‘80s and the ‘90s. There was no internet. There was nowhere to go. Kumbaga sobrang one-horse town yung town namin at the time. So I had nothing to do but read comic books and read books. So yun talaga yung source ko ng entertainment and inspiration.

Avid: My earliest memory of drawing was 4 years old. I was so bored at a funeral so drawing lang ako ng drawing sa notebook ng nanay ko. Art wasn’t something that I set my mind on. It was something I was born into. Kasi my father is a painter, my mother runs a gallery. My uncles – all their friends are artists. So para kang pinanganak sa ninja clan, so ninja ka na rin by association.

Were the characters and scenes in “Saving Sally” based on or inspired by actual people and events?

Charlene: A lot of the situations is based on things that me or many of my friends experienced. So there’s a lot of reality that sort of encrypted into the story. So, yeah, I took my cue from real people.

Were the illustrations all products of your own imagination?

Avid: I run a very small studio, it’s called Rocket Sheep. Look us up, we’re awesome (laughs). We are the little studio that built this film. I worked with Jeter, Jethro, Joshua, all very great artists, I hired them, they were fresh out of college, now they have children, they’re paying for house loans. I work with a very small but awesome team. It’s a collaboration, and from imagination, definitely.

Was there a point when you felt hopeless during the filming of “Saving Sally?”

Charlene: I felt hopeless many, many times. Para kaming joined by an umbilical cord eh, kami ni Avid. Lalo na when we started doing this movie. Talagang tatawagan niya ako pag may problema. We’d see each other all the time and we’d try to figure out how to solve certain problems. Sobrang daming problema na dumadating in the process of making this movie. There were a lot of times na kine-question ko yung ginagawa namin, na parang, ‘Ano ba ‘tong ginagawa natin? Matatapos ba tayo? Is it going to be worth it when we finish?’

What motivated you to continue?

Avid: We started it, let’s finish it. Commitment talaga to the craft. It would be a waste to let all this artwork go.

What advice would you give to aspiring young creatives who want to make it?

Charlene: You have to force yourself to work even when it feels like walang pupuntahan yung ginagawa niyo. Kasi I really believe that if there’s something nagging you, there’s something nagging you to do something or to create something, then you should pursue it. Di naman sa you quit your job and just do that. But even just in your spare time, you could have a day job, but if you can spare 20 minutes in a day, half an hour to work on the project that you feel really represents you, then please do, you should do that.

Avid: Please don’t follow my path, it’s not advisable! I think I did an awesome film that took me so long. There are people out there in the industry who interned with me, who are now even better than me, kasi they kept making films over and over again and gumaling sila. You see what I’m saying, parang there’s this parable na, yes, you can make a great pot by working on one single pot for one month but, if you start making a pot every day, you’ll have at least five good pots. You see yung ganun? So my path is not advisable.

Why should people watch “Saving Sally”?

“Saving Sally” stars Rhian Ramos in the role of Sally; Enzo Marcos as her smitten friend Marty; and TJ Trinidad as Sally’s boyfriend, Nick. Also starring in the film are Bodjie Pascua, Carme Sanchez, Shamaine Centenera Buencamino and Archie Adamos. It opens in cinemas on Dec. 25 as part of the Metro Manila Film Festival and has been rated Parental Guidance (PG) by the MTRCB.