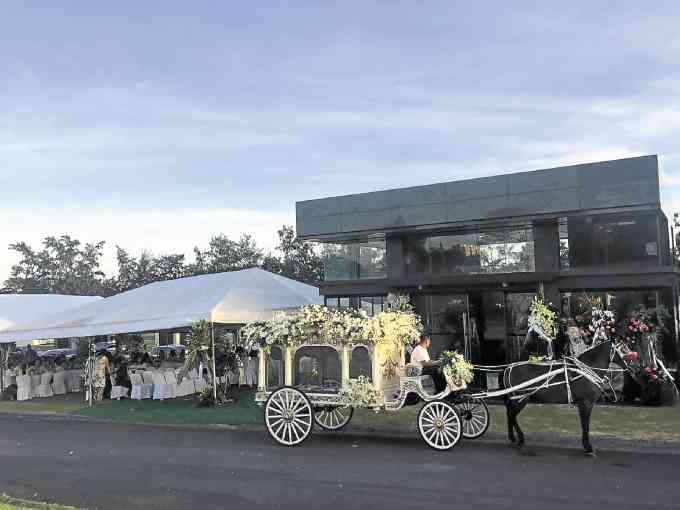 A fitting send-off for two ladies

Tall and elegant in bearing, Tita Loleng easily stood out in a crowd. She and my mom, who made up for her lesser height by standing straight and remaining slim well into her 60s, bonded in the way beautiful women do—in a common vanity. They never allowed themselves to appear dowdy, whether at home or in public.

Much to their frustration, they had daughters who didn’t measure up, alas, not even vain enough to do anything about it.

Tita Loleng was not a blood relative, but she was an Arguelles who traced her line from Jose Rizal, whose descendants were very close to my own Roces-Reyes grandparents. I learned she had fallen ill at the 100th birthday of her cousin; I had expected to see her at the party, and, missing her, her nieces Bea and Mandy and I arranged to visit through Corito, her eldest daughter of five children. We went in the afternoon with merienda.

In the bright bedroom on the ground floor where Tita Loleng now stayed, she didn’t at all look seriously ill; in fact she may have looked better than any of us. Her thick, undyed, long hair hung loose, neatly brushed from the face that seemed to glow, as good skin does at whatever age, showing off her lovely Castilian features. She spoke softly but looked alert, laughing when certain characters were brought into the conversation.

Sick but not dying

“She was sick but not dying,” Corito said. In fact her last week was a busy one—she hosted her Wednesday lunch group at home, Friday she hosted another lunch for nieces and nephews. Saturday evening the nurse called Corito to let her know she wasn’t breathing normally. On the way to the hospital, she died. “I guess,” Corito added, “she had said goodbye to her friends and family.”

Her children were hardly prepared, but they felt their mom guiding them on what to do.

“It was so like Mom to do that,” said Corito. They felt her choosing the coffin to lie in and the caftan to wear—they were a match. The choice of flowers to go with everything else, they left to a professional, Tony Padilla.

Knowing her mother’s incurably positive outlook, Corito told close relatives and friends to come to her wake in floral prints, not black. Indeed, the chapel evoked an almost celebratory feeling. There, amid an abundance of bright-colored flowers, lay Tita Loleng like a queen for viewing. Playfully placed amid the flowers was a big teddy bear, and leaning on her coffin was a walking cane that matched her caftan—a visitor almost tripped on it.

When Heritage offered them the service of a carriage to carry her remains to the family mausoleum to lay side by side with her husband, Tito Pabling, sight unseen, Corito said yes. It seemed to her just perfect. They also reused the flowers at the altar to decorate the carriage, which was indeed fit for a queen. When Heritage offered a butterfly release at the end of the ceremony, Corito was almost ecstatic: “Mom loved butterflies, her caftan itself was decorated with butterflies. Everything fell into place. She left as elegantly as she lived.”

Lily always said she knew her body more than anybody else, and was therefore not the ideal patient. She constantly argued with her doctors and her one and only son, Jurgen. She may have been in denial for a long time, although she finally agreed to dialysis—not easy for her, Jurgen or her doctors.

She loved and lived life to the fullest in our company, but mostly with her sisters, with whom she shared the love of ballroom dancing and traveling. She and her sisters had their own DIs. With all that practice, Lily was easily a standout in our alumni dance presentations.

I got to know Lily better only after we were reunited in our mature years, notably for the dance rehearsals for our silver, golden, emerald and diamond homecomings. She was generous and thoughtful of others to a fault, especially to classmates.

It was at her wake that I finally met her only yet unspoiled, devoted son, Jurgen. “I decided to have only one child, a son, and that’s what I got,” Lily once said triumphantly. I remember asking, why only one? Her answer was direct: “I wanted to give him everything, and I can only do that if he’s only one.”

Jurgen was successful and hardworking, good-looking, and fairly tall like Lily, and I imagine his basketball-star father, who passed away early in the marriage. It was also at the wake that I met his Filipino wife, a fellow Theresian of ours and her mother-in-law, who, in the beginning, had not been accepted by Lily’s traditional Chinese family.

But Lily, aka Chua Siok Ki, who kept her maiden name Chua, as allowed in Chinese tradition, stood by Jurgen, who goes by his father’s name Tanpho. “I want him to be happy,” she told them.

She had been responding very well to dialysis after a traumatic start. In a year, she was down from three to two days a week. She was getting the hang of it, not missing our lunches, even joining out-of-town trips around which she rescheduled her dialysis, much to her son’s dismay. She seemed more energetic than some of us.

Then, on the third year, she began losing weight and having dizzy spells; her hearing began to fail. We lost touch during the holidays until we received a forwarded text from Jurgen. On Dec. 29, brave Lily had decided to stop all medication and asked to be sedated until she passed on. At 1:20 a.m, Dec. 30, Lily, 83, left us.

Jurgen told us how his mom had sat them down for final instructions, immediate cremation, among them, but also—and here Jurgen and the doctors couldn’t believe their ears—about what to do with the food in the refrigerator.

No stone unturned in life and in death, Lily stayed in charge, and God let her.