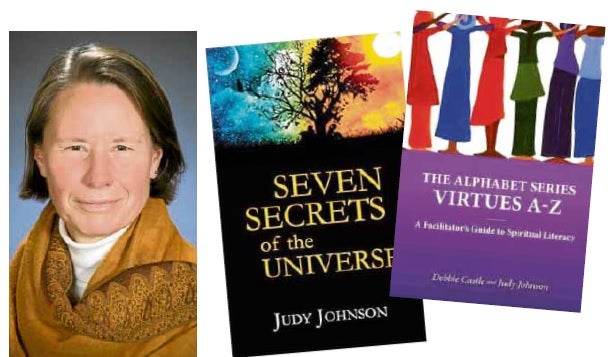 Judy Johnson (left); “Seven Secrets of the Universe” and “The Alphabet Series”

“Nothing teachy-preachy,” Judy Johnson likes to say about her work.

Just the same, the Canadian author, educator, lecturer, corporate management coach and facilitator has come across as an engaging, memorable mentor to attendees of her classes, seminars and workshops across North America, Latin America, Europe, India and Asia in the last 25 years. Her “best sellers” are variations on the subject of values in a time- and task-obsessed world.

Johnson is in the Philippines to conduct free public programs, workshop facilitators training and yoga retreats as guest of Brahma Kumaris Philippines. Her two-week schedule starts on Thursday, Feb. 9, at the Center for Spiritual Learning in Tagaytay, where she will speak on “Resilience: Thriving in Chaos.”

On Feb. 15, she addresses medical practitioners in Tagum City, Davao del Norte, in two programs: “Imagineering a Better Future” and “The Power of Decisions.”

Back in Tagaytay on Feb. 20, she will speak in a drug rehabilitation center on the “Resilience of the Mind.”

At the end of each program, Johnson will autograph copies of her latest two books, which will be available for sale at the venues. “The 7 Secrets of the Universe,” published in July 2014, follows four teenagers at the point of global disintegration, on a quest that require them to decipher reality from illusion.

“The Alphabet Series: Virtues A-Z,” which Johnson co-authored with Debbie Castle and which was launched last year, submits that virtues are expressions of “the beauty of the soul” and, as such, “creates a foundation for a deeply satisfying life and (ultimately) a better world.” It is the product of a series of experiential sessions designed to “understand the variety of positive qualities within each human being,” held in Brahma Kumaris centers in Halifax, Nova Scotia.