Have you tried out the perfect selfie phone? | Inquirer Lifestyle ❮ ❯ 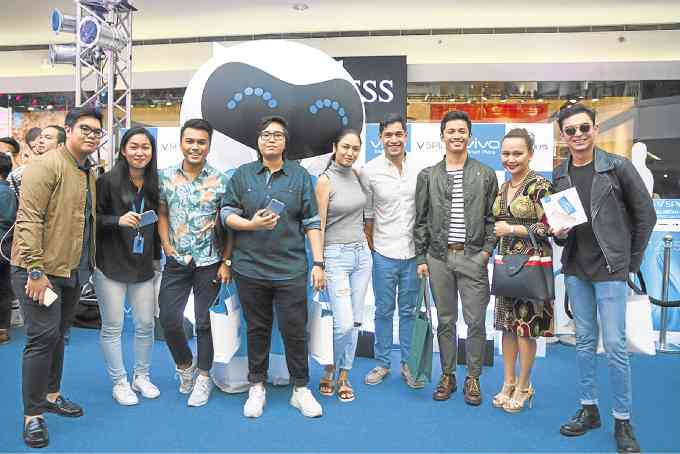 Have you tried out the perfect selfie phone?

Is there such a thing as a perfect selfie phone, dahlings?

That’s the peg of the Vivo V5 Plus, the latest smartphone model from Chinese multinational technology company Vivo, recently launched at the SM Mall of Asia Atrium.

Touted for its “advanced selfie technology,” the Vivo V5 Plus is the world’s first smartphone to have a dual 20-megapixel front camera, able to create a “bokeh” effect, or the art of beautifully blurring a photo’s background, keeping the details of the object in focus extremely sharp.

The event also reintroduced NBA superstar Stephen Curry as brand ambassador of all Vivo smartphones, including the Vivo V5 Plus.

Congratulations to Nonie and Bert Basilio who recently had a double celebration—their 58th wedding anniversary and Nonie’s 80th birthday.

The elegantly prepared event, held at the Manila Polo Club and emceed by Lin Liboro, was attended by the couple’s friends and colleagues in socio-civic circles.

Nonie made sure that the program was followed to the letter. Ballroom dancing kept the guests warmed up before dinner.

Following the dinner was a special musical presentation that featured violinist Merjohn Lagaya, soprano Stephanie Aguilar and noted Korean baritone Byeong Park. All together they mesmerized the audience with immortal love songs as well as Broadway and classical pieces.

Nonie thanked all guests for their presence and donations to her chosen beneficiaries—the scholarship programs of the FCCP, the CWC, and the Zonta Club of Manila, the last two of which she initiated during her term as president.

A romantic evening and heartfelt thanksgiving marked the recent 30th anniversary celebration of the Century Properties Group at the Makati Shangri-La.

Joey gave special thanks to Henry Sy Sr. whose Banco de Oro gave him his first loan in 1987—“a modest amount, but it was used to help build our first condominium project.”

He also expressed gratitude to Century Properties clients from 50 countries, to whom he promised: “We shall continue to give you products that you will enjoy and be proud of.”

Century Properties has been known as an innovator in the real estate industry, whose projects have involved the participation of Paris Hilton, Philippe Starck, Missoni, Armani, Versace, Trump, Daniel Libeskind and Forbes Media.

In a sweet and candid moment, Joey’s wife Hilda led her sons Jigger, Marco, Robbie and Carlo, along with the company’s board of directors like Washington SyCip, Jose Cuisia Jr., Ricardo Cuerva and Rafael Yaptinchay, to a surprise birthday greeting as Joey was also celebrating his 70th birthday on the same evening.

Out on stage came a 10-ft-long cake with 100 candles—30 green ones to celebrate Century Properties’ three decades in the business, and 70 for Joey’s birthday.