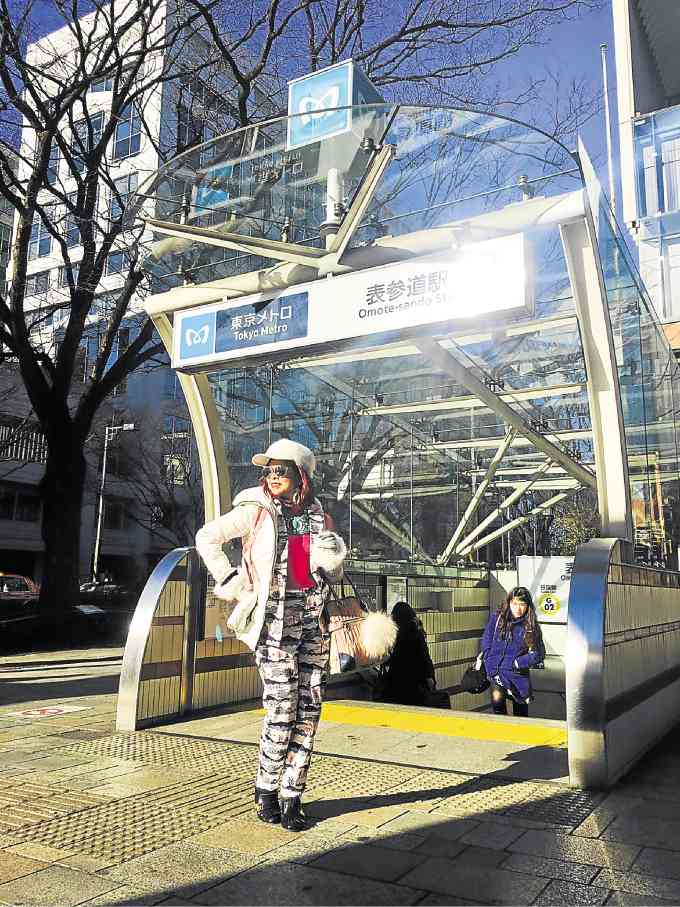 At the Tokyo Metro Omote-sando Station

Travel is my constant source of life inspiration. It is food for my creative soul. Discovering new destinations and enjoying endless shopping opportunities are just some of the perks that I look forward to whenever I travel.

Frequent travelers should check out the Travel Tour Expo 2017 (TTE) at the SMX Convention Center in Pasay. The annual travel expo, which ends today, has numerous packages on exceptional promos as well as airfares at incredibly low prices.

In 2016, the number of tourists from the Philippines to Japan exceeded 300,000 for the first time, reaching a record of 347,800 (an increase of 29.6 percent compared to the previous year), indicating an active market for travel to the Land of the Rising Sun.

Tokyo Metro is mounting its first display at TTE (booth 396 and 397) with the aim of increasing awareness among as many Filipinos as possible that Japan has a subway called the Tokyo Metro in Tokyo, a city with many attractive tourist spots.

There are many fascinating Tokyo Metro stations including Ginza, Omote-sando, Asakusa, Shibuya, Shinjuku and Ikebukuro. The objective is to convey the message that reasonably priced, comfortable and safe travel throughout Tokyo is possible by using: 1) the Tokyo Subway Ticket, an unlimited ride ticket, to visit its many interesting stations; 2) the free WiFi available at all stations; 3) “Welcome Board” from which convenient subway-related information can be acquired at major stations; and 4) the ticket information offices at which questions will be answered.

The main services that Tokyo Metro offers visitors to Japan are as follows:

These tickets can be purchased at locations including Narita Airport, Haneda Airport, Tokyo Metro ticket information offices and some Big Camera stores.

Free WiFi can be used at all stations on the Tokyo Metro. Tokyo Metro stations are convenient for looking things up during travel or uploading memorable photographs to social media. Preparations are also underway to make it possible to use free WiFi within subway cars.

Welcome Boards have been installed at 14 stations that are used by a large number of foreign guests. These boards show information related to subway tickets, route guides for major tourist spots and route maps containing tourist spots. You can see how to get to your destination station as well as how much it will cost and how long it will take in a glance.

Ticket information offices have been installed at Ueno, Ginza, Shinjuku, Omote-sando and Shibuya stations. At these offices, you can ask any question; for example, how to use the Tokyo Metro and areas around the station. English-speaking staff members are always present and able to answer questions.

The company is therefore responsible for a metropolitan railway network that is used by 7.07 million people per day (as of 2015). As a public transport body supporting the urban functions of Japan’s capital, Tokyo, it is both a Guide for Tokyo and a Linker for Transport Networks in Tokyo.

Tokyo Metro not only safely and reliably transports guests to their destinations, but also actively engages in related businesses to support the daily needs of its guests.

The unveiling of the first cultural investment of Japan’s largest financial group is a testament to the strong relations of the two sovereign nations—the Philippines and Japan.

The ceremony will be held at the Washington SyCip Park in Legazpi Village, Makati City, on Valentine’s Day.

Fresh from my Japan trip hosted by Tokyo Metro, I watched “Wicked,” one of the most celebrated, spectacular and successful stage musicals of all time. “Wicked” premiered in Manila in 2014, where it opened to rave reviews and went on to enjoy a highly successful seven-week run.

The producers of “Wicked” recently announced that the West End and Broadway musical phenomenon, which tells the incredible untold story of the Witches of Oz, is extending its Manila leg by adding another full week of shows at The Theatre at Solaire.

James Cundall, producer and chief executive of Lunchbox Theatrical Productions, said he’s thrilled that, once again, “Wicked” is in Manila with a cast that is very excited about performing to such an enthusiastic fan base, and to introducing this amazing show to new audiences.

The Manila season is presented by Globe Live and new seats are now on sale. Book at ticketworld.com.ph and through TicketWorld outlets.

Major sponsor is Novuhair, in cooperation with Solaire Resort and Casino; special thanks to OOCL, and Diamond Hotel Philippines. Makeup is by MAC Cosmetics.