Bukid Kabataan: A place to be strong, to belong | Lifestyle.INQ ❮ ❯ 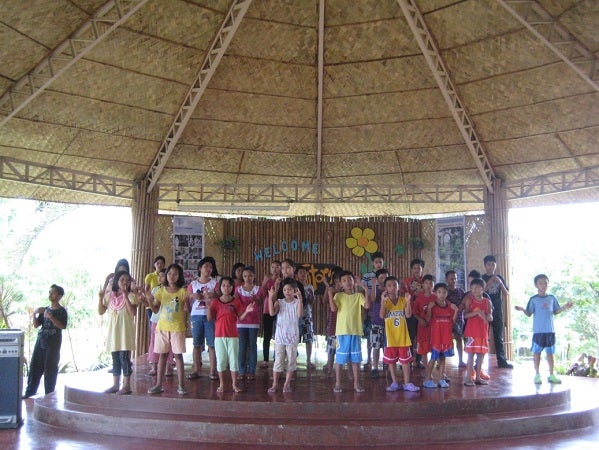 ALL TOGETHER NOW: BK residents on their way to healing

Bukid Kabataan: A place to be strong, to belong

The happy shrieks of children blend with the sonorous mooing of the cows. The striking green of the fields compete with the blueness of the sky. The patter of little feet, the chorus of voices in the classrooms, the rising of the nuns’ chanted prayers at eventide…

Space, quiet, fresh air, dew on the grass, good food, warm arms and the healing embrace of nature.  But here above all, is the child, the child who needs to become whole again.

Bukid Kabataan Center (BK), which means children’s farm, is a special place, a home for children who have never known one or who had watched theirs fall apart. Here they slowly claim their stolen childhood, name their pain and bind their wounds with the help of caring adults.

The children vibrate with energy, laughter and songs. But behind the innocent eyes and carefree mien is deep pain that these children are helped to confront. There are bright moments and bad moments. There is a time to drink the sun and a time to weep oceans.

At 9, Melan (not her real name) had already decided for herself how to fix her life, step out of her trauma and move on. Raped repeatedly by her grandfather and ostracized by her family because she was going to make a case of it in court (with help from legal and social services), she found herself in a bind.

Then Melan made a dramatic bargain. She would not testify so that the case against her abuser would be dropped – but on condition that she would never be returned to her family or next of kin, and that her family should release her for legal adoption.

It took some time for Melan’s desire to come true. BK became Melan’s home and school for a couple of years while the adoption process was ongoing, which included matching, visitation, counseling and other legalities.

Melan’s adoptive family came to BK recently to finally take her with them to her new home abroad. She had eagerly waited for this moment to happen, and when it did, BK came alive. A child was on her way to healing, and most of all, to a home.

Considered a foundling, Jassie was about 6 when social workers brought her to BK. She remembers carrying a small bag with some clothes and going to a church with her father. Jassie’s father told her to wait there while he completed some errands. Night fell but Jassie’s father never returned.

A security guard took pity on Jassie and took her home. Every day for several days, the guard brought back Jassie to the church in the hope that her father would return. But he never did. Because he could not afford to take in a child, the guard put Jassie in the care of a family whom he thought would be caring enough. But things did not work out and Jassie again found herself abandoned on some wayside.

A young boy is repeatedly beaten up by his stepfather, a prepubescent girl is rescued from prostitution. The children’s stories about their young lives sound like they come straight out of a tearjerker telenovela, except that they are not a scriptwriter’s imaginings. They are real – and one can only gasp in shock.

Bukid Kabataan is a special ministry of the Religious of the Good Shepherd (RGS) that serves children who have been physically and sexually abused, neglected and abandoned. BK’s services are inspired by the charity and compassion of Jesus the Good Shepherd and are directed towards the healing and total development of both male and female children (aged 6 to 16 more or less).

The ministry looks after the physical, mental, emotional, social and spiritual well-being of those it serves so that they, despite their tortured past, may become enabled and productive members of society. The RGS’ work in BK is in line with the congregation’s thrust towards justice, peace and integrity of creation and special care for women.

Founded in France in 1835 by Saint Mary Euphrasia Pelletier, the Good Shepherd Sisters came to the Philippines in 1912. The mission of the RGS, one of the largest women’s congregations in the world, is “directed to the most neglected and marginalized, in whom the image of God is most obscure.”

BK had its beginnings in 1983 as the Morning Glory Program (MGP) of the Archdiocese of Manila/Caritas Manila and with Good Shepherd Sisters running it. The land on which the MGP set up its ministry was donated by Msgr. Francisco Tantoco, a priest of the Archdiocese of Manila. MGP and BK have since undergone several reorganizations until the Good Shepherd Sisters fully took over in 2000, with Sr. Mercy Ang, RGS at the helm. The Department of Social Welfare and Development then gave it accreditation as a residential child-caring institution.

In BK, children are provided not just food, shelter and clothing but also individual care, education and counseling/therapy. Values and a sense of family and community are inculcated in them. BK hopes to reconcile the children with their parents, but only after a proper home environment is ensured. For some children, however, there may be no homecoming ever.

Located in Sitio (sub-village) de Fuego, Barangay (village) San Francisco, General Trias, Cavite, BK is about two and a half hours’ drive from Manila. The spacious farm setting of 6.5 hectares makes it conducive to healing. Affluent adults have so-called spas for the soul, so why not something similar for poor, wounded children?

The words nature therapy or eco-therapy may have yet to make it big in psychology books and become mainstream, but it is already vicariously being experienced in BK even as empirical data on its efficacy have yet to come in.

BK offers elementary schooling from Grades 1 to 6 within the compound. A child is allowed a maximum stay of three years, but exceptional cases are given consideration. An after-care program, educational assistance and family counseling are provided for those who have moved on.

Sister Gemma says that the children take to gardening work without much prodding and head for the gardens after classes. Closely supervised by farm workers, they eagerly tend the plots and love to watch the seedlings grow. Harvesting gives them a thrill.

In BK are 17 big greenhouses built by the “Halaman sa mga Simbahan” program of the Department of Agriculture. Bishop Luis Tagle of the Diocese of Imus (Cavite) – who will be installed as Archbishop of Manila on December 12 – was instrumental in getting this done. Vegetables are grown organically, that is, without chemical fertilizers and pesticides. Organic fertilizers are produced right there and vermiculture (cultivating earthworms) is now in place. The farm produce provides BK with healthy meals and some income.

The children have become appreciative and protective of the natural environment. “One time,” Sr. Gemma recounts, “a child questioned the cutting of some trees. We had to explain the reason behind it and assure him that for every tree that was cut, a dozen or so were planted.”

At one time BK had more than 50 children in its care. Right now there are 39, still quite a handful if one considers the complexity of each case. They could test one’s patience and endurance. Tantrums and mischief are not rare. Sr. Gemma remembers the time she had to chase a bunch of them. Out of breath and not able to catch up, she blacked out and fell to the ground. When she came to she found herself surrounded by children weeping and cradling her in their arms. “They were saying, ‘Sister, sorry po, di na uulitin.’” Sr. Gemma laughs about it now.

“You can tell when it’s gagamba [spider] season,” Sr. Erlin chuckles, “you’d see them carrying around toothpaste boxes.”
But climbing trees is a no-no. Well, why not try the rooftop?

The sisters and staff know every trick in the book and are a step ahead of their wards. When things go awry, a friendly cop is called in to teach the kids that they can’t get away with fist fights. A punching bag is hung for those who need to express their rage. Regular group sessions are held to resolve conflicts or for the children to pick up gems from the Bible. One child had his own profound reflection on Jesus’ going away to rest.

In her years in BK, Sr. Gemma has not known of a child who has tried to escape. “Oh, they love it here,” the nuns say.  For these women, the work is very difficult but rewarding.

And how does BK survive? Sister’s quick answer: by God’s providence. There is no steady source of funds (none from the government or foreign funders), but somehow BK continues to thrive on the kindness of low-key donors and even strangers. (Those interested to help can contact BK at tel. no. 046-5093009.)

For those who have issues with the Catholic Church or Christianity in general because of the failures and transgressions of its leaders, the quiet work of mercy and compassion in BK provides a different, more reassuring image of the Church.

“Pasasalamat ay alaala ng puso [Gratitude is the memory of the heart],” a popular saying from Sr. Mary Euphrasia, is now a line from a song that the children of BK often sing. It goes with the heart-rending refrain, “Pamilyang nawala, dito namin natagpuan (The family that we lost, we have found here).”

Their voices rise to a crescendo and their hearts cry out, “To be strong, to belong.” •