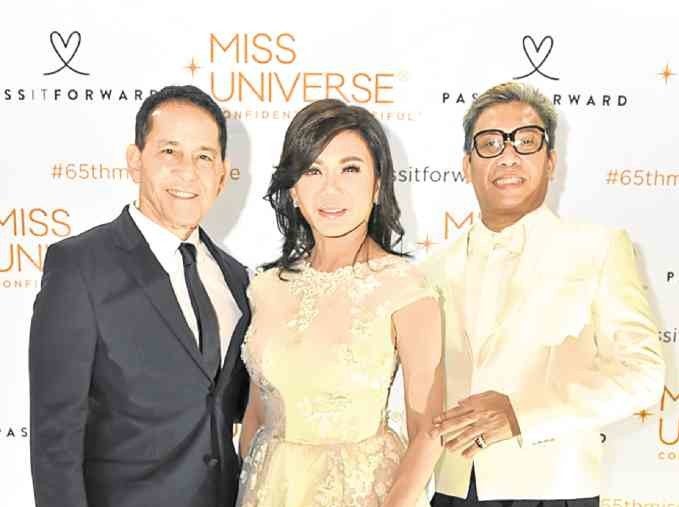 For his efforts in the successful mounting of the recently held 65th Miss Universe pageant in Manila, businessman and former Ilocos Sur Governor Luis “Chavit” Singson has been crowned “Mr. Universe.”

The honorary title was bestowed on Singson by Miss Universe president Paula Shugart during the National Gift Auction Gala of the 65th Miss Universe at the grand ballroom of Conrad Manila.

This was one rare occasion when the public saw all the Miss Universe candidates in one room outside of the main competition.

Highlighting it was a live auction of gifts from the candidates hosted by Richie Lerma of Salcedo Auctions. Proceeds from the auction were donated to a nongovernment organization, Positive Action Foundation Philippines Inc. (Pafpi) through the Pass It Forward foundation.

Pafpi and Pass It Forward are devoted to raising awareness about HIV/Aids, which is also an advocacy of the Miss Universe.

“I feel very humbled to be in the same league as all the women awardees,” said Belo.

The exhibit featured 73 works by the maestro of color, National Artist Hernando Ruiz Ocampo. The works cover the postwar years, when H.R. began to experiment and develop the style he would be renowned for, until 1978, the year of his death. It therefore encompasses 33 years of H.R.’s extraordinary career, dahlings.

“H.R. Ocampo was one of the country’s Thirteen Moderns, a movement headed by Victorio Edades,” said Jaime Ponce de Leon of Leon Gallery. “H.R. himself would become the leader of the neorealists which also included Vicente Manansala and Cesar Legaspi. The Coseteng collection includes 66 works of Ocampo on paper, including half a dozen rare watercolors and etchings.”

Also in the collection are six works in oil, like “Starward” (1959), “one of the works H.R. refused to part with in his lifetime,” said Ponce de Leon.

“Votive Forms” (1966), he added, was another major work that was exhibited in the São Paulo Art Biennial, the second-oldest biennial after Venice, in the art world.

A seventh work, this time in acrylic, is 6.75 feet long. Titled “Noritake Festival,” it was created for the opening of the Coseteng ceramic plant.

Ponce de Leon recalled meeting Coseteng at her home in La Vista. “I immediately loved her flair and her confidence in her taste in art.”

The gallery owner said the exhibit took some time to mount. “It was finally decided to include both Ocampo’s famous oils and the works on paper in one show, to commemorate a long friendship of a patron-gallerist and an artist. I thought it was just proper to have the drawings tell the story alongside the more renowned paintings.”

“The Cheetos Snack Fest is a celebration of snack innovation coming from two snack giants, Taters and Cheetos,” said Taters marketing head Brian Tanchanco. “Cheetos has always been the go-to cheese snack, so when we found out that Pepsi Philippines was bringing the product into the country, we couldn’t let the opportunity pass. This is the first snack fest of its kind in Asia because we’re not only featuring one, but five ‘Cheetofied’ snacks.”