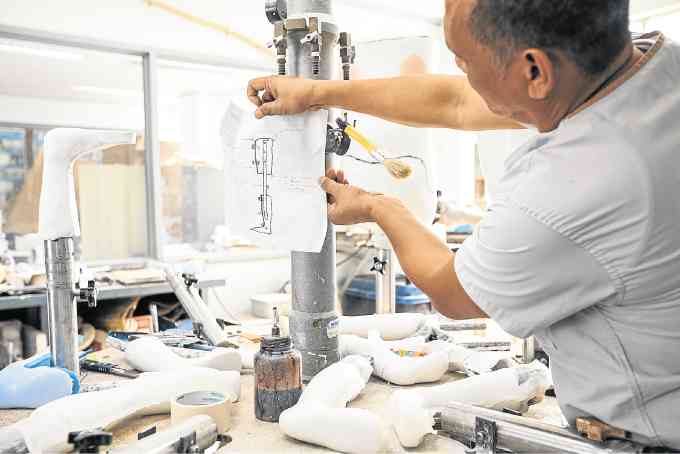 Prosthesis and orthosis center at PGH

Unicef will build ‘one-stop shop’ for children with disabilities

James Lawrence Malabiga was only two months old when he developed retinoblastoma, a cancer of the eye most common in children. To prevent the tumor from spreading to the brain, his parents decided to have both eyes removed.

Now 10 and blind for nearly eight years, Malabiga said he’s out to prove that his disability will not stop him from pursuing his dreams. He’s second in his class—only because he couldn’t draw in art class, his mother Liezl insisted—and he can play the guitar, piano and flute. The lad wants to become a musician when he grows up.

“I want people to know that blind people have talent, too,” he said in Filipino to Inquirer Lifestyle.

Elcydane Coil Doremon, a child with retinopathy of prematurity, was born at only six months, so his eyes were not yet developed. He dreams of becoming a doctor someday. Chariabella Bautista had cancer at three months old and underwent chemotherapy for two years before having both eyes removed. She finds joy in playing the organ.

Malabiga, Doremon and Baustista are just a few of the 4,407 children with disabilities (CWD) who will benefit when Unicef transforms the rehab facilities of Philippine General Hospital (PGH) into one unified hub. At PGH, rehab facilities are located far from each other, forcing parents and CWDs to walk around the hospital to have physical therapy and get prosthetics measured, for example.

With Unicef remodeling the entire system for CWDs into a “one-stop shop,” parents and CWDs will no longer have to walk from building to building to have their regular checkups. An elevator exclusive for CWD patients will be installed outside the building for easier access.

There will be four one-stop centers nationwide in Luzon, Visayas and Mindanao, each costing approximately P10 million. It will be the first of its kind in the country that will provide comprehensive services such as diagnosis, provision of assistive devices, counseling, therapy and referal to specialists under one roof.

A fund-raiser, “Unicef Children’s Ball,” will be held on March 4, 6 p.m., at the Rigodon Ballroom of The Manila Peninsula. (Contact Maida Salcedo at [email protected])

“That’s what’s good about Unicef—they look at it very holistically,” said Unicef partner Dr. Josephine Bundoc, Children with Disabilities lead and Physicians for Peace director for Walking Free. “The solution to improving the CWDs’ function is not just finding somebody who will pay for the services. Unicef explored other factors like supply and demand, environment accessibility, and attitude and culture of the person with disability.”

According to Unicef, there is an estimated one CWD in seven children, or around five million living with disabilities in the Philippines. These range from hearing, visual and mobility impairment, to those with development or learning disabilities. Only 5 percent of the 1.5 million who need assistive devices like hearing and vision aids or prosthesis receive that support.

With the one-stop center, an estimated five million children with disabilities will be reached. They will have access to prevention, early detection, early healthcare intervention and comprehensive disability services, specifically rehabilitative therapy and assistive devices through the PhilHealth benefit package.

“Early intervention is very important. You’re able to develop their ability so that they can go to school and eventually find work to become independent. This is very important to prevent secondary disabilities,” Bundoc said.

There are assistive technologies given to children who are visually impaired or blind, for example. Bundoc said they provide canes, electronic tablets that allow them to surf (audio-based tablets), talking watches and recorders to record the lectures of the teacher.

Bundoc said that at present, PGH provides for the vision-impaired, hearing-impaired (hearing aid, speech therapy, how to use the hearing aid), those who need prosthesis (artificial limbs), braces for scoliosis, cerebral palsy and foot orthosis, wheelchairs, and help for children with developmental delay (autism and paralysis), as well as physical occupational and speech therapy. There is also a psychologist, a social worker, a nurse and a rehab medicine specialist.

Apart from that, PGH has a preschool so children don’t need to be absent from school each time they have to go to therapy.

Unicef has partnered in developing a benefit package with PhilHealth, who will pay for the hearing, visual and assisted mobility devices needed by the children, plus the rehab needed so CWDs can use the device. It will also cover therapy and treatment of children with developmental delay, Bundoc said.

“We need to create awareness. Parents of CWDs are not aware of the services available for them,” she said.

Unicef is leading a global campaign for universal access to assistive technologies for CWDs, working on child rights and participation, child health expertise, and strong supply and logistics capacity. In the Philippines, it is working on the individual, health system and societal levels to improve primary health prevention, early detection and early management of children with disabilities.