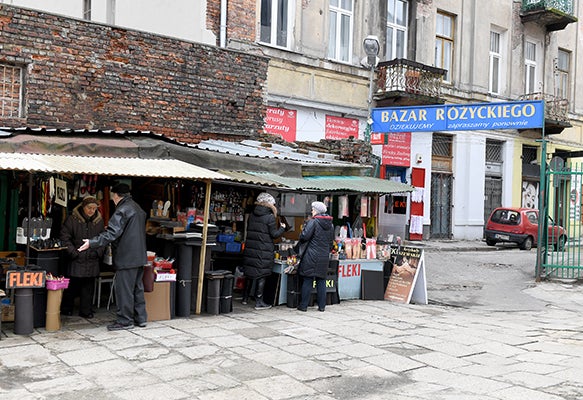 Poland’s capital is a tale of two cities no more

The Polish capital is a city divided: by a river, by history, by reputation.

For years, the right side of the wide Vistula waterway was known for murder and mayhem, while all the power and money went to the left. Not so anymore.

Even the relief of the riverbanks is telling, says Halina Cieszkowska, a 95-year-old former teacher and longtime resident of the working class Praga neighbourhood on the right.

“Warsaw’s left bank is on a slope. It’s higher up. So they look down on us. And here we are, below,” says the energetic great-grandmother.

“Praga was always a worse neighborhood. Neglected… so Praga had an inferiority complex. Still does. Though maybe to a lesser degree now, because we’ve been trying to fix things,” she tells AFP.

Praga is now safe, with art galleries, innovative hip bars, renovated prewar buildings and a subway line since 2015, which have all helped bridge the gap between the two sides.

Across the river, the left bank boasts the city center and historic old town, and is not known by any overall name but is sometimes considered by residents on both sides to be Warsaw proper.

Efforts to spruce up Praga began in the 1990s but the city now plans to pump 1.5 billion zloty (350 million euros, $380 million) into the sprawling right bank to further revitalise the area.

The upgrades through 2022 include connecting thousands of apartments to central heating, renovating historical sites and investing in social services to undo years of postwar neglect.

During World War II, Nazi German forces flattened 85 percent of the left bank, but Praga was spared because it had already been occupied by the Soviet Army.

It is in Praga that you can still find exposed redbrick walls, old street lamps, buildings pockmarked with bullet holes and courtyard shrines with statues of the Virgin Mary.

That authenticity is why Oscar-winning director Roman Polanski shot his wartime film “The Pianist” there.

But because the neighborhood was left standing while the rest of the city was reduced to rubble, all the reconstruction funds went to the left bank.

“Things fell into ruins here,” says Praga tailor Jerzy Hlasny, a 63-year-old with a bushy moustache who has worked at his shop for four decades.

“Praga was a kind of unwanted child. But things are happening now,” he tells AFP, giving as an example heritage buildings renovated with European Union money.

The neighborhood also came to have “a bad reputation. That it’s just lowlifes and thieves here”, adds Hlasny, who said he himself had been beaten up and still has trouble seeing out of his left eye as a result, after one night refusing to hand over money to two men who entered his shop.

Warsaw deputy mayor Michal Olszewski recalls that when he first moved to Warsaw in 1996, he lived in the part of Praga “known as the Bermuda Triangle, where according to legend you didn’t come out alive.”

The notorious years are long gone. But the lore lingers and many of those born and bred in the district, like Adam Lisiecki from the Praga Museum, are tired of the stereotype.

He says the city “hit the bull’s eye” 15 years ago by renovating buildings along one of Praga’s main roads, the cobbled Zabkowska Street.

“It really changed people’s view of Praga… Suddenly there was this exemplary street, a new face which emboldened many residents from the left” to visit, he tells AFP.

“Art soothes the savage beast,” says Agnieszka Niedzwiecka, who lives on the left side but in 2010 opened a Praga gallery, whose name translates to “On the right side of the Vistula.”

It was a welcome sight for residents who said “soon Praga will be associated with art, not alcohol,” she tells AFP, while her French Bulldog snores nearby.

The project “that will have the biggest economic and social impact on Praga is the second metro line. Hands down,” says Olszewski, adding that further Praga stations are planned.

Even the Vistula itself now draws people from the two sides together.

In summertime, the once forgotten green riverbanks have become the place to be in recent years, in particular, the right shore, because of its urban beach.

“It’s incredible that this wild stretch has been preserved in the city center of a capital,” says Lisiecki. “You can have bonfires and barbecues and drink a tasty beer.” JB