Ina Ayala, Yvette Lopez do dressage: Why sitting seemingly effortlessly on a horse is the ultimate challenge | Lifestyle.INQ ❮ ❯ 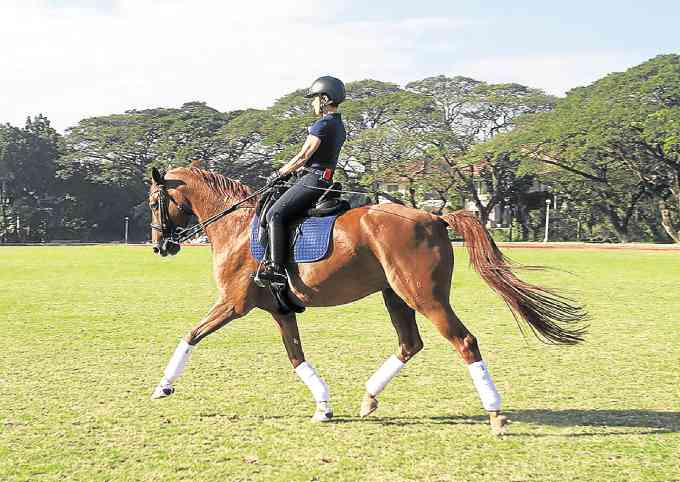 Yvette Lopez: “We always strive to do our best on practice days and also on the test days.’”

Ina Ayala, Yvette Lopez do dressage: Why sitting seemingly effortlessly on a horse is the ultimate challenge

The riding arena at the Manila Polo Club (MPC) is quiet at 7 a.m. Instead of trainers barking instructions at the equestrians, communication is done through a hands-free device called Ceecoach, much like a radio on ears.

Riding coach Tata Montilla speaks in low tones as he guides his student, Ina Ayala, as she sits elegantly on top of her horse. Montilla mentors the country’s top equestrians, Ayala and Yvette Lopez, both of whom have been consistently named MPC’s Dressage Rider of the Year.

Dressage is an exacting equestrian sport that seems like a “non-event” to the uninitiated. However, it is quite challenging, requiring the rider to maintain a relaxed but alert state of mind and a movement vocabulary. The rider is also adjudged by how well one keeps the horse in correct form.

Like ballet, the horse moves with grace as if it’s dancing in the clouds. Sitting regally on the saddle, riders learn defined patterns which, when memorized by their horses, will allow them to move up to a certain technical level. Dressage challenges the control, pace, seat, evenness and grace of movement of both the rider and the horse.

However, dressage may seem boring to non-horse fans, unlike the fast game of polo or the tricks of show jumping.

“You’re sitting on the horse, but the hardest part is to make it look effortless. If you put beginners on a horse, they’ll be all over the place. To look very quiet and act as if nothing is going on—as if you’re sitting on a chair instead of a horse—takes so much skill. That’s the difficult part. It’s to make it look like you’re not doing anything because it demands complete body control, horse control, mind control,” explains Montilla.

He cites Ayala as one of the examples of grace under pressure.

Maria Angelica Calalang-Ayala had an illustrious career as a footwear designer in New York, Australia, Milan and Hong Kong. While her family was based in Hong Kong, she acquired a retired race horse from the Hong Kong Jockey Club. These race horses are regenerated to perform dressage or show jumping. She called her horse Club Whisper.

To level up her technique, she has been training under German athlete Frank Freund. During her yearly training in Germany, she rides on a Dutch Warmblood named Saigon.

“Saigon will give you everything but he’s a little bit of a scared cat. He can pass by the same monobloc chair 20 times, but on the 21st time, he doesn’t like it. He’s going to spook. In dressage, every step is judged. With one little hesitation, your score goes down. You have to keep his mind working so that he doesn’t look at these funny things around. You call it a ‘spooky horse,’ she explains.

Ayala was the lone Philippine entry in the dressage event at the 28th Southeast Asian Games, held in Singapore in 2015. For her first-ever regional competition, she placed sixth over 35 contestants.

The competition levels in dressage are set by the Fédération Equestre Internationale (International Equestrian Federation). These range from Prix St. Georges, the introductory rank to the international levels of dressage, to the ultimate Grand Prix.

Although Ayala’s competition level was the initial Prix St. Georges, it’s the highest level a Filipino rider has achieved. The equestrian and the horse are tested on trots, walks, canters, small circles and changes in canters and reining in on the horse.

However, she competed a notch higher in the Intermediare I level in the SEA Games. This rank now includes pirouettes and trickier changes in tempi in canters.

“The tests that we were given in the SEA Games finals were a level higher than what I was trained for,” says Ayala. “I had to fast-track the training, but it turned out well in the end. But I still need to linger in the Intermediare I level first before I go higher up to the Intermediare II and Grand Prix. You need another horse that can do two movements that are not in the Prix St. Georges—the piaffe and passage.”

The piaffe is like a cadenced trot in place, while the passage is a rhythmic trot where the horse moves forward with a slight suspension. These classical dressage movements test the rider’s command over the horse.

“They’re like the ultimate movements because they show complete control, harmony, balance and rhythm. All the requirements of dressage put together are shown in those movements,” she explains.

The preparation for the competition is physically and mentally intense. “You have to bring out partnership from an animal that’s stronger than you,” says Ayala. “The training is repetition with the horse and with you, so the movements become muscle memory. You have to ride like every moment has to be perfect.”

Although dressage riding looks deceptively simple, Ayala points out the strong core work and even the even distribution of weight while seated. Coordination and timing are vital to get the horse’s cooperation.

“The horse will not give it to you if he doesn’t like it at all,” she says.

Ayala likens the rider’s partnership with the horse to a marriage: “You don’t buy a horse that you know you’re not going to get along with. Choosing a horse is like choosing a husband; you’re going to see it every day. You know that there is a future being harmonious together.”

Although some horses show potential, they can be gentle although lazy, and take longer to motivate. Then there are the hot horses, a favorite of top riders who compete in the Grand Prix, because they are more challenging but vigorous and more perceptive of their surroundings.

At this stage, Ayala plays it safe, preferring a horse that is both quiet yet energetic.

“I’d have to learn to work on a super hot horse before I enter the Grand Prix,” she says.

On Ayala’s horsemanship, Montilla observes, “Ina is very calm. She hardly ever overreacts. The horse can be going crazy, but she’s still there. Her horse is not easy to ride on. She manages to communicate with him to keep him calm.”

The training has kept Ayala trim. “When I track the hours of exercise in my Fitbit, they’re mostly fat burn. Fitbit also tracks sleep, which is good because then you know if you’re taking care of yourself or not.”

As an alternative workout, Ayala takes to suspension training, where one uses body weight and cables to fight gravity.

Her goal is to ride through and excel in the progressive levels until she reaches the final rank, the Grand Prix.

“It’s a long journey. Dressage is a slow, simmering process,” she says.

Riding since she was 9 years old, Mercedes “Yvette” Llamas Lopez grew up with Montilla sharing the same passion for horses at MPC.

“We wanted to ride anything, anytime, anywhere,” she recalls.

At 14, she started joining club competitions in show jumping and pursued dressage at a later age.

“Jumping was fun. You appreciate dressage when you’re mature because it requires discipline,” she says.

Horseback riding eventually took a backseat to marriage, raising five sons and working in the family jewelry business, Mercelles. But when her children were grown up, Lopez returned to her passion.

Six years ago, Lopez took up dressage since it had less risks than jumping. She tapped her childhood riding buddy, Montilla, to train her. With her natural horsemanship, she easily developed a relaxed by poised deportment and became attuned to the reactions influencing her horse.

“This riding is a partnership with your horse and trainer. All three of you are a team,” she says. “At this point in my life, I can make a full commitment because my children are grown up. I have more time for myself.”

Like Ayala, Lopez worked up to the level of Prix St. Georges. This level consists of advanced trots, walks, canters, leads, circles and halts and a musical freestyle.

Lopez dreams of competing abroad. The preparation begins in the daily training. She and Montilla don’t believe in cramming for an event, but to be always competition-ready.

In Belgium, she trains with Guillaume Ducos to refine her technique and gird her for competitive dressage.

“If we want to reach our goals, we work on being prepared each of our riding. It’s like brushing our teeth. Horseback riding has become part of my life,” says Lopez. —CONTRIBUTED