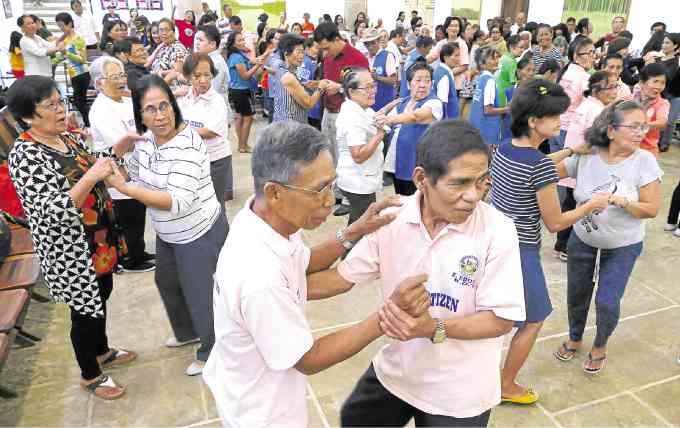 There’s nothing like dancing for seniors to shake off memory loss. Picking which leg or arm goes in what direction in a dance choreography involves a lot of thinking and moving, engaging different parts of the brain.

“Memory starts with attention. They need to focus, do one thing at a time, to remember,” said Dr. Jacqueline Dominguez, neurologist at St. Luke’s Medical Center and VP of the Dementia Society of the Philippines, in her talk on “Improving Neurocognition with Dance and Kinesthetics” (Indak).

The talk was held at Pinto Art Museum in Antipolo.

Dominguez led a team that studied 100 senior volunteers in Marikina City for a year, using dance as therapy to improve their memory. She said that memory, when it enters the brain, goes in so quickly that it can disappear in three to four seconds.

Constant absorption of new material in learning the steps and remembering them, as the choreography progresses from simple to complicated, makes for a mental and physical workout. Not only will it improve balance, gait and heart health, but it will also boost brain power and reduce feelings of depression and isolation, Dominguez said.

In the 2015 study, in which seniors danced for two hours twice a week for one year, Dominguez said those who danced improved their score from 21 to 22 during memory tests, while nondancers dropped their scores from 21 to 20.

The geriatric depression scale (GDS) among dancers also went down from 2.83 to 2.33.

The science community used to think that one part of the brain corresponds to one action of the body, but that is no longer so. The new science says that one action is actually a complex connection to different parts of the brain.

“And that is what is learned and trained and repeated in dancing. The connection is what makes the brain complex. No part of the brain works in isolation, it is connected to different parts of the brain. They really make new receptors, so there is a physiologic, morphologic and anatomic basis for that,” said Dominguez.

Exercises, such as those in the gym, are so repetitive they don’t require one to be mindful of their actions. That is why, Dominguez said, people can run on the treadmill while watching TV. Movements become automatic. With choreographed dance, there are new steps to learn, depending on the beat of the music, she added.

She noted that in Finland, the number of seniors with Alzheimer’s disease is going down because of its nationwide one-hour aerobic exercise program thrice a week, promotion of the Mediterranean diet, and the requirement to have their medical checkups every three months.

In the United States, music therapist Annette Asuncion said, a woman who was shot in the head and survived was able to regain her speech through music therapy.

“We use music to address specific needs. If we can address that with an activity using music, we’ll use that,” Asuncion told Lifestyle.

For geriatrics with dementia, she said, music elicits memories of their childhood to help them remember.

“Premature babies who need calming, for example, can become more relaxed. It depends on what the goal is. We are able to manipulate the music to help, for example, cancer patients for emotional support and self-expression,” she added.

Music therapy is one of the expressive therapies that is clinical—and evidence-based. It uses music as intervention to accomplish individualized goals.

“Listening to music that calms you or gets you through a workout is not music therapy,” Asuncion said. “Music therapy uses music with an activity to help them address their goals. Like in the case of the woman shot in the head, her goal was to regain her speech. Music helped her learn how to talk again by associating words with musical beats,” Asuncion added.