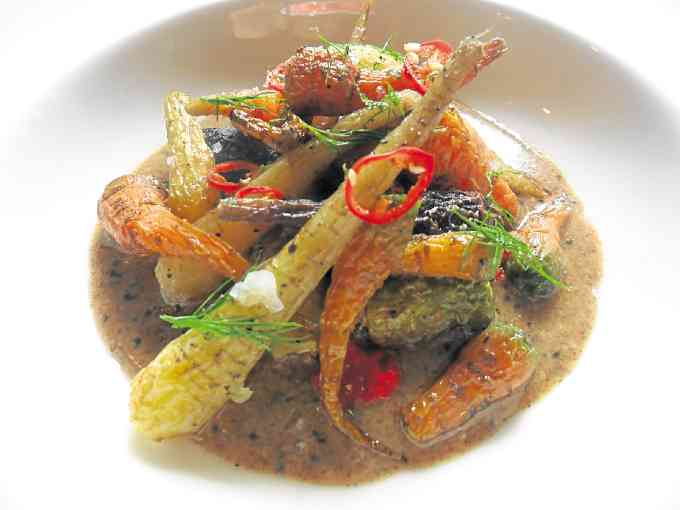 Roasted carrots in a nut paste

Whenever I’m introduced to a vegan, my first impulse is to look at his or her shoes. Because that’s what I remember of vegans—they don’t wear leather shoes because they’re made from the hide of animals.

But it’s not proper to look down on the footwear while talking to a guest.

Chef Tim Ferrell is a vegan. And yes, I did manage to espy his footwear from afar—sports shoes with no hint of leather.

He is sous chef of ABC V in New York, the vegetarian restaurant of Jean-Georges Vongerichten, part of a trio of ABC Restaurants, says its website, that “focuses on local, sustainable, seasonal produce that does not use pesticides, synthetic fertilizers, insecticides, or GMOs.”

While Ferrell echoed those food philosophies, he was in Manila mainly to introduce the Jean-Georges Academy at Enderun Colleges.

It’s not another culinary studies venture (like the Ducasse Academy) but more a placement offer to work in the many Vongerichten restaurants in New York.

Culinary enthusiasts, experienced or otherwise, are invited to be interns—the former to be trained in the Vongerichten way in one week; and the latter, in one month. Placement takes care of the US J1 visa and internship is one year.

At press time, the interviews would have been done and those who passed already deep into training.

Meeting Ferrell was an occasion to understand the cooking in the vegetarian restaurant adapted to the local produce, as Vongerichten had insisted. Among them were the unusual carrots, grown locally by those into specialized farming, in various colors like orange, purple or yellow, and were quite small in size.

Even in urban New York, Ferrell said, many of the ingredients he needs are just around the corner. At Union Square, there is a farmer’s market and a rooftop garden in a Brooklyn garage. Buying there is his way to connect with the growers, much like our suki system where you enjoy bargain prices and even get to meet the grocers’ families.

Ferrell was quick to acknowledge his mentor, chef de cuisine Neal Harden. No, there is no mock meat, he said. Vongerichten, in a previous interview, said, “Vegetables can stand on their own.”

It’s more than just cutting, boiling or roasting—roasting, but with wood fire and flavors enhanced by fermentation.

Fermentation is the hottest kitchen technique these days, a rediscovery of a natural procedure that has been applied to preserve food for centuries.

Meanwhile, the carrots are bathed in olive oil and salt, covered with aluminum foil, roasted in the oven for 40 minutes.

“Fat” is needed, Ferrell said, which, at a glance, seemed contrary to the vegetarian style. Fat coats your tongue, he added, so that the flavors stay longer.

However, by fat he meant the nut paste made of macadamia, almond, pecan, black sesame seed, flax and Himalayan salt. These are crushed and mixed to turn into the “sauce” needed.

Acid is used to finish the dish—he used calamansi for this, but back in New York he opts for caviar lime.

Some of us were not content with just looking at the result— we had to taste it. The carrots were sweet by themselves. Taken with the nut paste, the vegetable juice and the acid finish, they were so good we couldn’t have enough of them.

Ferrell also did a spring roll-like dish, the wrapper made of thinly sliced mango. It contained pickled sautéed mushroom in olive oil, garlic and sea salt, with a spicy sauce.

The chef’s dishes qualified the statement that “vegetables can stand on their own” but enhanced by fruits, fermentation, juices, nuts, natural seasonings
—plus the chef’s creativity and knowledge of ingredients, and the farmer’s excellent produce.
E-mail the columnist at
[email protected]