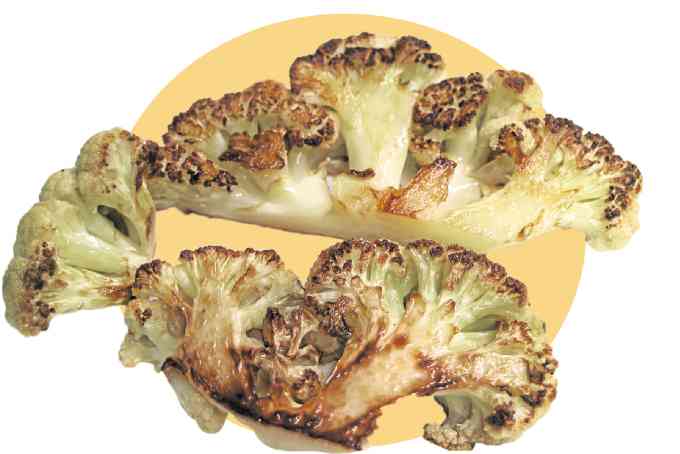 It’s a vegetable that many of us have long taken for granted. But now cauliflower has become the latest rage in the US.

Perhaps it’s about time we all take a second look at this vegetable, which Mark Twain once described as being “nothing but cabbage with a college education.”

I guess one of the virtues of this vegetable is that when cooked properly it can mimic other foods. Depending on how it’s cooked, cauliflower can have a neutral taste and be a substitute for rice or bread. Yet it can also absorb the flavors of the ingredients slathered on it, hence there’s curried cauliflower, cauliflower salad and cauliflower pasta.

Cauliflower is also low in calories and glycemic index while being high in vitamins and minerals.

One of the recipes I tried recently is cauliflower steak. I must admit I was never much of a fan of this cruciferous vegetable—until I tried this recipe. Brushed with a mixture of olive oil, lemon juice and garlic, it tastes very appealing.

Now I serve cauliflower steak regularly at home. This dish is ideal for vegetarians and even for the whole family, especially during the meat abstinence days of the Lenten season.

For best results, choose a large head of cauliflower. Also, keep the cauliflower’s core intact so the florets don’t separate.

If the cauliflower head is attached to a large stem, cut off the hard end of the stem but make sure to keep the core intact. Likewise, remove any leaves that may be attached.

Whisk together the olive oil, garlic and lemon juice in a bowl and brush the cauliflower steaks generously with the mixture. Season with salt and pepper.

Brush a nonstick skillet with some of the olive oil or spray the skillet with nonstick cooking spray. Put the skillet over a stove and heat it to medium heat. Add the sliced cauliflower steaks, about two or three pieces at a time, and cook for four to five minutes.

Flip the steaks over and brush again with the olive oil mixture. Season with additional salt and pepper if desired. Continue cooking until the edges caramelize and turn brown and the cauliflower becomes tender. Repeat with remaining sliced cauliflower.