Dry-aged, in-house premium steak that’s exactly like what you can have in NY or Tokyo | Inquirer Lifestyle ❮ ❯ 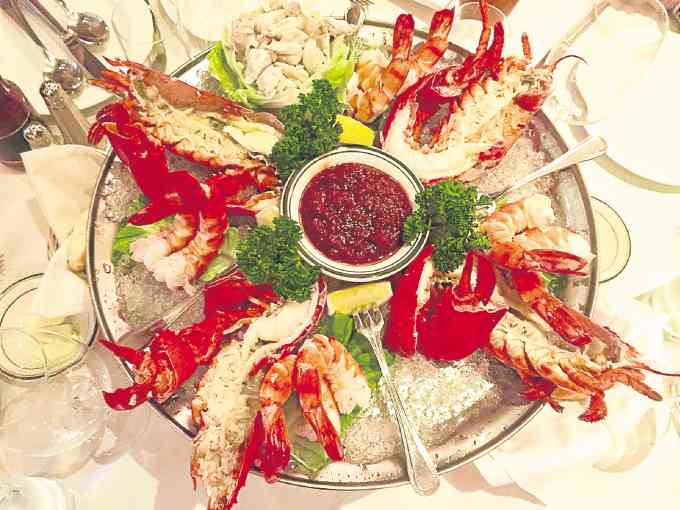 Dry-aged, in-house premium steak that’s exactly like what you can have in NY or Tokyo

There aren’t many experiences that are as pleasing to the steak lover as the one Wolfgang’s Steakhouse has to offer.

I was fortunate to have spent Sunday evening in the steakhouse at Resorts World Manila, in the company of Lydia D’Amato (Wolfgang’s Steakhouse US partner and Worldwide VP for restaurant operations), Raymund Magdaluyo (partner, Wolfgang’s Philippines), my dear friend Alan German and Timi Baylon.

It was an evening that brought together my personal favorites from land and sea.

For dinner, we feasted on a Seafood Platter filled with lobster, jumbo lump crabmeat and jumbo shrimp. It was served at perfect temperature, with a delightful cocktail sauce, drizzled with lemon.

The Beverly Hills Chopped and the Tomato and Mozzarella Cheese Salads were just as fresh.

Admittedly, though, it was the thick slab of tasty home-cured bacon, laid on the table with the salads, that I took a fancy to. The bacon heightened my senses and roused my taste buds for the specialties of the house, which did not disappoint.

Both meats were seared to perfection, with a golden crust. On the nose, they exuded an earthy, nutty, rich, brown butter whiff. Cooked precisely to medium rare, the steaks had a snap on the outside, just as I liked it. The meat was tender, juicy, with an almost wine-y bouquet. It was a multidimensional mouthful of concentrated beef that melted in my mouth.

Wolfgang’s belongs to the few dining destinations that properly teach the palate how this choice cut of meat should be enjoyed. Here, steak is prepared just as it should be—enjoyed in its purest form, laced with “jus.” It’s meat without pretense, robust and delicious.

In between courses, we listened to Lydia talk about steaks and Wolfgang’s.

Each one of the resto’s 16 locations worldwide serves only certified USDA Prime Grade beef. About only three percent of all beef sold in the US qualifies as Prime.

Wolfgang’s also selects beef only from male cattle, because it’s supposedly more tender and flavorful, with less sinew and lower fat content. This meticulous selection process ensures that each diner enjoys a slab of meat of superior quality.

Lydia takes pride in the dry-aging process of their meats, which are flown in weekly from the US. It’s “the central process that creates an unsurpassed steak experience,” she said.

Premium cuts of beef sit on ventilated racks where they are dry-aged in-house for 28 days, inside a specialized aging room strictly kept to between 2.78 to 3.89 degrees Celsius, with humidity control locked in at 78 to 82 percent. An air circulation system with auxiliary fans helps to remove moisture from the meat while it is dry-aging.

After approximately three weeks, the meat starts to develop that distinctive, inimitable flavor that can be achieved only through dry-aging: the edges become darker, the surface begins to dry out, while the meat inside intensifies in flavor and juiciness. The natural enzymes break down fat and connective tissues, resulting in a buttery texture.

Every day, steak portions are cut. When an order comes in, the meat is removed from the aging room and placed in high-intensity broiler at 1600 degrees Fahrenheit. The result is steak that is juicy and tender, with caramelized crust.

“That incomparable USDA Prime Grade, dry-aged on premise steak that you had a week ago must taste exactly the same one month, one year, and even 10 years from now,” said Lydia. “The sight, sound, smell, feel and especially taste must be identical, whether you are dining in New York, Beverly Hills, Waikiki, Tokyo or Manila.”

From the first steakhouse that Wolfgang Zweiner and his son Peter opened in 2004 in Park Avenue in Manhattan, New York, to the resto’s 16 locations worldwide and counting (two more are opening in Manila, at the new Stock Exchange Building in Bonifacio Global City and at the newly renovated Podium in Ortigas), Wolfgang—with Peter and Lydia and their crème de la crème herd of cows
—has certainly come a long way!