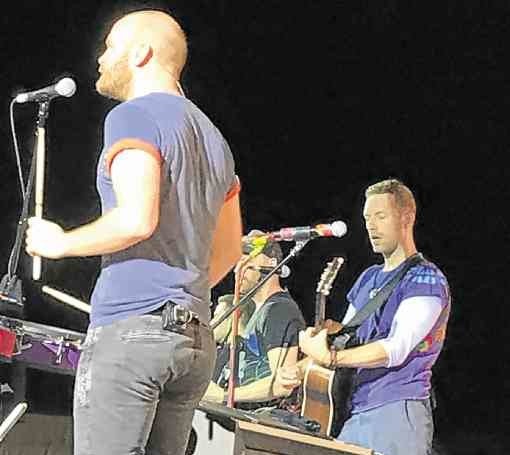 What Coldplay, new Bench model have in common

Under a “sky full of stars,” it was a heavenly view to watch and sing and dance at Coldplay’s magically epic “A Head Full of Dreams” concert, April 4, at the Mall of Asia open grounds. Performing before a crowd of 45,000 fans who didn’t mind the pricey, no-seats concert tickets, the British rock group lived up to expectations.

It took more than 17 years for the band to play in the country. Aside from performing its dozens of hits, Coldplay thrilled us with effects like interactive LED wristbands, giant balloons, fireworks and confetti blasts of different shapes.

Lead singer Chris Martin and his bandmates were on stage for over two fist-pumping hours. With his boundless energy, Martin fully utilized the 30-meter-long runway that extended from the main stage.

Like some in the crowd who are of a certain age, I had no clue what Coldplay’s songs were until I heard them at the concert. I confess to having arrived late at Coldplay fandom. But now, I’m a lifer. A big thanks to MMI Live which brought Coldplay to Manila, with Globe as main sponsor.

Coldplay’s music traverses through Generations X, Y and Z. Its positivity and energy are for all.

It was a similar feeling I had when I met the young, creative Jeremy Jauncey, founder and CEO of Beautiful Destinations or BD, the award-winning creative agency behind the world’s largest travel community on social media. At 32, Jeremy may well be the epitome of #goals.

With over 13 million followers from across 180 countries, BD celebrates the different people, places and cultures of the world. To date, the BD Instagram alone has an impressive 8.7 million followers, showing how Jeremy has managed to build what some might consider his own social media empire.

Aside from being head honcho of BD, Jeremy has also been dipping his toes into activities such as hosting and public speaking, making it his personal mission to encourage people to travel and to experience the beauty of the world.

Today, add still another achievement—Jeremy is the newest international endorser of the Philippines’ leading clothing and lifestyle brand, Bench.

This team up between Jeremy and Bench is a much-needed reminder that, if there was ever a good time to discover our country’s hot spots, then this would be it.

In line with Bench’s #LoveLocal advocacy, Jeremy is working with the brand to encourage Filipinos to love local destinations, and to rediscover the beauty that’s been around us all along.

During his brief stay in Manila, the globe-trotting hunk had a meet-and-greet session at SM Mega Fashion Hall, and also gave lectures to students from De La Salle-College of Saint Benilde, University of Asia & the Pacific and Ateneo de Manila University on building a social media platform and how it can be used to promote local destinations.

All eyes were on Jeremy when Bench, headed by chair Ben Chan, hosted an intimate luncheon to formally introduce the endorser to the Philippine media. During the event, the globe-trotter talked more about his favorite travel destinations, gave some tried and tested travel tips, and even gushed about his half-Filipino girlfriend.

Although Jeremy is headed to his next travel destination, we can still expect more exciting things to spring from this new Bench collaboration.

More millennial influencers and guests attended the recent launch of Wilkins Delight, a new line of colorful drinking water from beverage giant Coca-Cola. Infused with flavors from real fruit, Wilkins Delight aims to give a taste of excitement for young adults and anyone who want more than pure drinking water.

Wilkins Delight rehydrates the body with its water base, and tickles the tongue with its real fruit juice. The hydrating burst of flavors in the new drink will surprise Pinoy millennials to break free from monotony by adding color to their lives’ routines.

Speaking of millennials, one of the most promising is golfer Miguel Tabuena. He was recently honored and awarded at Inquirer Golf Magazine’s 20th anniversary at the Grand Ballroom of City of Dreams. San Miguel Corp., Belle Corp., Volvo Philippines, Under Armour Philippines and Samsonite Philippines sponsored the IGM Philippine Golf Gala.

Miguel is the youngest player to win the Philippine Open. He turned professional at 17 and has won eight times on the ICTSI Philippine Tour. He is also the only Filipino golfer to have played in the Olympics, and among the few who have played the US Open.

The Trophy will be the perpetual one for the National Tournament of Club Champions, which did not have one. Now, the names of the NTCC champions, the best of the club champions every year, will be inscribed on the Don Alejandro Prieto Championship Trophy. Congratulations, Dad!