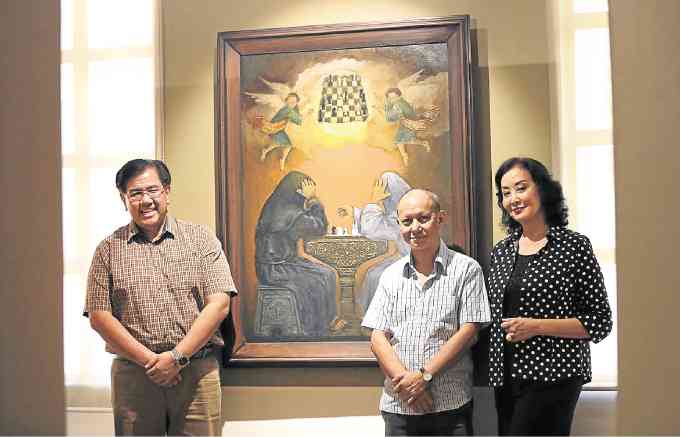 If a little heresy is good for the soul, then how about a little more?

Adventurous minds just might find out by viewing “Hocus: The Hofileña & Custodio Paintings,” easily the most unique art exhibit to open this year.

Described by curator Gemma Cruz-Araneta as “a collaboration between a historian who cannot paint and a painter wary of history,” the 26 paintings in the exhibit depict the consequences of the Patronato Real—the unholy alliance between the Spanish crown and the Catholic church—after its collision with the indigenous culture of the indios in las islas Filipinas.

Painted with a sardonic eye and a near-encyclopedic knowledge of the less-traveled byways of our colonial past, the cumulative effect of “Hocus” is like discovering a secret history of life under the friars: one that reveals it to be far weirder and more magical than our dry-as-dust textbooks would have us believe.
The exhibit opens today, April 18, at the National Museum of Fine Arts, National Museum complex.

One need only look at “La Pesadilla (The Nightmare),” a huge allegorical triptych reminiscent of Hieronymus Bosch’s “The Last Judgement,” that sees life as a perpetual struggle between good and evil, with the human race as collateral damage.

The central panel depicts the dance of death in a tropical Gothic setting, with a devilish attention to detail and an eclectic set of references that range from the Book of Revelations to Philippine mythological creatures to Italian cannibal movies. If the four horsemen of the apocalypse rode carabaos instead, this is what the end of the world might look like.

The rest of the exhibit is just as trippy, if not quite as epic.

In “El Hombre Olvidado (The Forgotten Man),” a dying hacendero bequeaths his landholdings to the Dominicans in exchange for perpetual prayers for his departed soul. In “Puente de Capricho (The Bridge of Caprice),” Dominicans and Franciscans square off on a stone bridge as the dead Rizal is ferried by a boatman, perhaps to the afterlife?

If one subscribes to Jung’s theory of a collective unconscious, one might say the images resonate with our racial memory.

As the program notes put it: “Some of the paintings are based on historical facts, a few were dictated by fancy but still subject to the realities of history.”

The paintings are all the more remarkable considering that they are the work of a two-headed being.

Saul Hofileña Jr. is a lawyer, writer and avid historian. Guy Custodio is a painter and art restoration specialist who has worked on, among other projects, the heritage churches of Bohol and San Agustin church.

Together they are Hocus, an acronym of their surnames.

The pair met in 2013 when by chance Hofileña strolled into the old church in Albuquerque, Bohol to find Custodio restoring its historic art work. They have been working together ever since.

As Hofileña recalls, “After seeing and buying some of Guy Custodio’s works, an idea germinated in my mind. What if I ask him to paint what is inside my head?… At first I would e-mail symbols I wanted Guy Custodio to project on canvas. Later, I let him use one of my apartments as his atelier. It is located in bucolic Dasmariñas, Cavite. He painted daily, giving life to my images on canvas, with his skillful brush strokes. Before I knew it, I had set up a sort of medieval scriptorium.”

“He would tell me the story, and I would start to get ideas,” recalls Custodio, who is steeped in religious art and iconography, having lived and studied restoration in Spain for more than 20 years.

“After a while, they just kept coming. What he wanted me to paint, I was able to produce. We worked continuously. Even before I finish one work, he comes up with a new idea. And all his ideas are brilliant.”

Usually, he adds, artists resent being told what to paint.

“I was like that, until I found Saul,” he says. “He is relentless in pursuing a theme for a painting. He demands originality, and history. In other words, he wants the truth of the past to be shown graphically in our collaborative work. I have been painting my entire life, but I believe the Hocus paintings will be the achievement of my lifetime.”

Eventually, the project took on a life of its own.

One spinoff is “Cartas Philippinensis,” a set of Tarot cards that reimagines the Major Arcana as embodying Philippine colonial archetypes.

As Maria Cristina Barron Soto, Ph.D., a professor from the Universidad Iberoamericana of Mexico City, wrote, “Cartas Philippinensis” “reflect an esoteric religiosity. The cards are glimpses of the syncretism of the Catholic faith which, when fused with the forces of nature, enrich and balance what is sacred to the Filipino people and bring to the fore a Spanish identity rooted in Christian tradition… Somehow, these cards reveal that God has determined the past and future of the Philippines, which makes it quite unique with respect to the other Asian nations that have other beliefs.”

Like all great collaborations, Hocus is a symbiotic relationship that is greater than the sum of its parts. Rather than sign both their names to their work, the pair devised an icon, the angel de cuyacuy.

“He is a Filipino angel sitting on a bench and reading a book with one leg swaying nonchalantly,” says Hofileña. “He is an angel destined to battle ignorance and superstitions, and not Satan’s murderous horde.”

Until quite recently, the pair was simply producing paintings with no thought of exhibiting. It wasn’t until another fortuitous meeting that the current exhibit took form.

“I’m also very interested in history, and I like the colonial style of painting, so when I saw Guy Custodio’s work at the Pinto Gallery, I loved it,” says Gemma Cruz-Araneta.

She met Hofileña at a meeting of the PEN International writers’ group at La Solidaridad, but was unaware that the two knew each other, until she saw the first Hocus works. Periodically, she would be shown other paintings, even advising them on period-correct costume details for some of the works.

Eventually, she agreed to curate the exhibit, suggesting the National Museum as the proper venue because it afforded adequate space and time for such a groundbreaking show.

With the National Museum now set to open its Natural History branch in the former Department of Tourism building in the Luneta, it’s hard to imagine the rough-and-tumble era that she describes, when the National Museum was forced to squat in parts of several government buildings.

When she wanted to mount an exhibit for artist Jaime de Guzman in 1971, she says, she had to refurbish an abandoned garage with the help of anthropologist Dr. Jesus Peralta.

Fortunately, “Hocus” will have the commodious Gallery 21 of the National Museum of Fine Arts until October, which should give viewers enough time to fully experience the works.

“Each painting has to be analyzed,” says Cruz-Araneta. “They’re full of symbols and are very thought-provoking.”

Annotations will be provided in a companion coffee-table book.