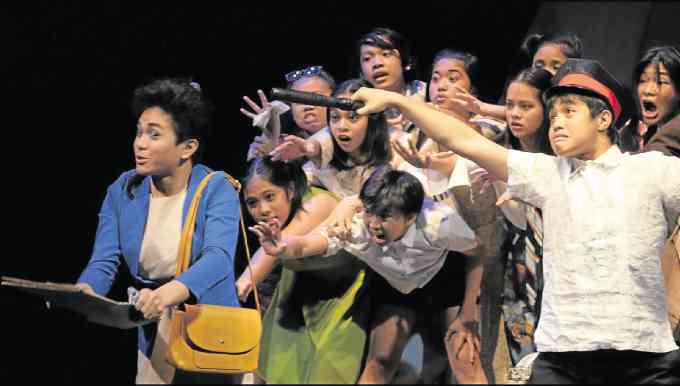 “Pragres,” part of the Philippine High School for the Arts’ production “Bantayog” —PHOTO BY BRANDON RELUCIO

Parallel to the explosive output in mainstream Manila theater has been a remarkable boomlet this year in politically aware theater for, and largely by, the student sector.

This activist-minded surge had started in the last quarter of 2016, spurred by outrage over the efforts at pro-martial law revisionism and, in particular, the Marcos burial. But it took the form of a flurry of activity across a whole spectrum, from grade-schoolers to university troupes, and a radical range of tones and styles.

UP Repertory’s “Ang Mga Maharlika” (actually part of the Fringe Festival), staged on a Makati rooftop, distinguished itself from the others by its shock-value transgressive style or, more directly in the words of its director, “bastusan” (“tutal, binabastos din naman nila tayo”).

Framed as a dialogue between Imelda and Dovie Beams in their old age, it delves into the sexual side of dictatorship in, ahem, graphic terms, and utilized audience participation to boot. Admittedly still very much in the rough when I watched, it was an eye-opening introduction to a less “polite” side of local theater.

Vastly different was the Philippine Stagers’ “Katips,” which I caught at a midweek performance at St. Cecila’s Hall in St. Scholastica’s College.

A “pop” approach at bringing the martial law experience to a young sector weaned on kilig and kwela, “Katips,” through its director Vince Tañada, clearly knew how to connect to its target audience. As the musical play segued from rom-com moments to harrowing torture scenes, one realized there are many ways to bring that experience home.

On the opposite end of the age spectrum was a remarkable children’s play put on by Raya School’s Grade 1 to Grade 8 kids at AFP Theater (of all venues!) that portrayed the martial law experience from a child’s perspective—a schoolgirl’s touching relationship with her detainee mother. “Isang Harding Papel” blended the didactic with the entertaining and made its points in a light, humorous vein.

By far the most outstanding production in this politically aware roll call was Dulaang Sipat Lawin’s “recital” production “Bantayog,” which had the direct impact of a blow to the mind and the gut.

In their indictment of martial law society, these kids from the Philippine High School for the Arts combined an amazing level of talent and creativity with, in the words of another viewer, a fire in the belly.

The first portion was a series of segments spanning a range of protest theater, from the raw street theater polemics of “Ilokula II,” to the absurdist social satire of Tinio’s “May Katwiran Ang Katwiran,” to the rollicking if heartbreaking farce of “Pragres.”

All passionately performed, but the heart of the series were two segments from Chris Millado’s “Buwan at Baril” and their trio of superb performances: Kyrie Samodio as Babaeng Itawis, James Lanante as Pari, and Elijah Canlas as Anak (a role transposed from the original play’s Asawa).

With all due respect to previous productions of the play (even the 1985 Peta original), I had not been so riveted as this afternoon, or so close to tears.

Then there was a second portion of acted-out monologues devised by the students themselves from documents as varied as a letter to a professor (from Lean Alejandro) to interviews with activist parents (variously survived or “disappeared”). Capping it off was a Tasaday dance that gave occasion for a thoughtful rumination on the vexing, so-current issue of “alternative truths.”

All this, it bears repeating, from high schoolers.

At the end of the quarter, Ateneo Entablado, which had staged in the last quarter of 2016 perhaps the most outstanding of the anti-martial law plays, “Desaparesidos,” put on what might be considered a companion piece: “Ang Dapat Nating Hindiang Pagbabalik ng mga Arturo Uy,” an adaptation of Bertolt Brecht’s “The Resistible Rise of Arturo Ui.”

Purely from the twist in the translated title, it was clear that the intention was to look forward as much as back. Unlike “Desaparesidos,” this was not only a completely student-cast production, but a “newbie” one drawing on the group’s neophytes, and it was not nearly on the same accomplished level. But the freshness and passion of the young cast ultimately overrode the rough edges and carried the message in heartfelt fashion.

As long as we are focusing on campus theater, this may be the place to note the least noticed (by the general public and indeed by the critics) feature of this scene: the student-thesis productions, showcasing the talents being honed in university theater courses, with the assistance of more senior performers and/or directors.

“Oresteia” at UP was staged at an open-air venue in the Diliman campus. Directed by Guelan Luarca, it showcased three graduating student-actors (Ralph Oliva, Rose Charmaine Camacho and Roco Sanchez) with three other supporting players in multiple roles in that challenging Greek domestic tragedy.

As a thesis production, it was necessarily raw in parts and could have benefited from a quicker delivery. But it was a prodigious effort from the student players and conceptually was an audacious mix of elements, shuttling from English to Filipino, from classical Greek-theatrical emoting to tongue-in-cheek humor.

Over at the Ateneo, Tinio’s “A Life in the Slums” was presented in Filipino and English versions, the two thesis-student lead actresses (Kolleen Yvonne Ricaro and Mikah Franco) switching roles, a quite brilliant ploy showcasing their versatility.

I liked the Filipino version well enough, but enjoyed the English more hugely: the comedy came through more effectively and the two leads and the supporting cast all performed with spot-on timing and verve.

Given such examples, it should be worthwhile to add such student efforts to one’s theater calendar, even as it is likely to be too heavy a load. It’s a good problem to have. —CONTRIBUTED