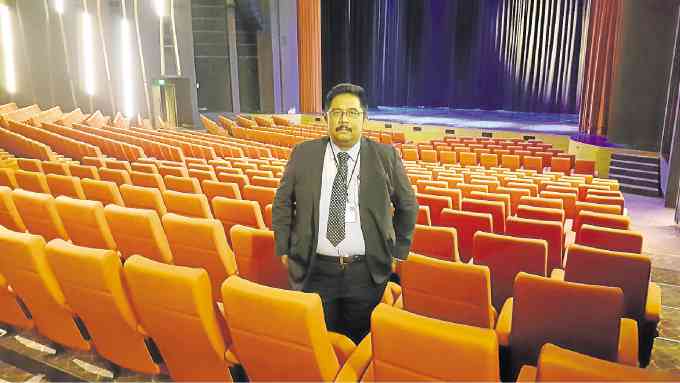 Shax Siasoco in his kingdom, The Theatre at Solaire

Meet the technical director behind the Manila ‘Wicked,’ ‘Phantom’—the guy who really runs the show

Shax Siasoco fits one’s vague idea of a technical director. His voice is calm and modulated. The tall, hefty director of entertainment venue operations at Solaire Resort and Casino doesn’t smile much, and his eyes appear almost sleepy behind his glasses.

Shax (as in shock—a school nickname earned when he dressed like a punk in high school) seems to be perpetually weighing things in his head. Asked what time the matinee show of “Wicked” at The Theatre at Solaire will end, he glances at his watch, and declares, “4:55.”

The attention to detail—“I’m a stickler for rules”—is just one of the traits that have made him one of the best technical directors (TDs) in the country, the man holding the fort when back-to-back world-class musicals and grand Filipino productions come to the theater.

Which is why, after “Wicked” has wound down, “West Side Story” and “The Sound of Music” are coming up next, and the arrival of the mega-musical “The Lion King” next year has just been announced, Shax still isn’t losing sleep.

“There isn’t much difference between a local and a foreign production, other than funding,” he says. “Everybody knows that talent-wise, nobody can hold a candle to Filipinos. That also goes for the technical part. I’ve gotten comments from foreign companies on this country being the best: People are disciplined, we understand theater. There’s nothing we cannot do.”

Shax admits that he thrives on the adrenaline: “I live for that. I like solving problems, especially with a deadline. Well, maybe my mind doesn’t get stressed, but my body does. Technically, I’ve lacked sleep for over 20 years!”

At 46, Shax has indeed gotten used to the notorious midnight setups that precede and follow major productions. After all, he’s lived this life since he was a communication arts major at De La Salle University, and has worked with almost every major theater director and company in the Philippines.

After meeting the late Tony Espejo, who was then artistic director of Gantimpala Theater Foundation, during a school production, Shax was invited by Espejo to join the theater company—where Shax was mentored by veteran TDs Joey Nombres and the late Jun Gomez. He also met his future wife, actress Len Ag. Santos.

Having acquired the practical knowledge, Shax decided to go back to school to learn the theoretical part. He enrolled in a Certificate in Theater Arts program at the University of the Philippines.

Although he was a technical major, that didn’t stop theater stalwarts Tony Mabesa, Anton Juan and the late Ogie Juliano from casting Shax in productions, where he often played the swing, ready to jump into any role.

Once, for Dulaang UP’s production of “Laruang Kariton,” Shax had to stand in for a hunky actor: “A hunk! And I was so skinny, they had to make me wear armbands to look like I had muscles!”

From UP, he went on to become technical director at Tanghalang Pilipino, the Cultural Center of the Philippines’ resident theater group, where he got to work with the late
National Artist Salvador “Badong” Bernal.

“Sometimes Badong would have structurally problematic set designs, and it was up to you to make sure you followed it without ruining the look,” Shax recalls. That’s why, to this day, Shax has never had a conflict with any director—“because I find a way.”

After the CCP, Shax formed an events company with Len, followed by a three-year lull in his career. “I really thought I was done, and I was only 30,” he recalls.

And then he did a small mall show which was seen by director Freddie Santos, who jumpstarted a new phase in Shax’s career by recruiting him as lighting designer for Trumpets’ staging of “Joseph the Dreamer” in 1999.

He served as Gary Valenciano’s TD for 14 years, part of the team behind some spectacular productions, beginning with the singer’s “Radical” concert at the Araneta Coliseum in 2000.

“At that time, moving lights were a new thing, and the average show would have about eight,” recalls Shax. “‘Radical’ had 48. Nowadays, we do shows with 150, 200 moving lights.”

It was also during this period that Shax began working on big international productions in Manila. He handled “Mamma Mia” and “Stomp” in 2011. Chosen as the local TD for “Phantom of the Opera,” Shax went to South Africa in 2012 to see how it was done before the show came to Manila.

“Phantom” remains his most complex, “malupit” one to date, with its moving boat, falling chandelier and other wonders.

In 2014, Shax was recruited by his now boss, Solaire entertainment director Audie Gemora, to join the casino’s theater team. Coming in three months before the theater’s inauguration in November that year, Shax had a say in what was needed to make the venue truly world-class. That year, he was also Manila TD for the first staging of “Wicked.”

Being TD for a theater or entertainment venue is different from being the TD of a live show, Shax clarifies. “In a show, you’re in charge of all the technical aspects of a production, literally like a foreman of a construction. There are many ways to put together a show, but hindi puwede free-for-all.”

Now, as TD for all of Solaire’s entertainment venues, he oversees everything from lights and sounds to whether the venue’s restrooms have toilet paper.

Yes, he has cancelled numbers he has deemed unsafe, including one where his specifications for the rigging of aerial dancers were not followed to the letter.

These days, the man who has built a reputation as the go-to technical director in Manila for tough, problematic productions still finds time to relax, watching movies with a beer in hand. In fact, like a true multitasker, Shax has adjusted admirably to taking care of wife Len, whose health challenges have led to numerous hospitalizations and regular trips to the hospital for dialysis.

As a testament to Shax’s utter professionalism, he recalls wondering why Freddie Santos decided to tap him, an unemployed technical guy, of all people, for a big Trumpets production 18 years ago.

Santos would tell him, several years later, that he saw how Shax lit a simple mall show with so
much heart.

“A ‘simple’ show is not in my vocabulary,” Shax says. “I don’t give 50 percent of my effort just because the fee is 50 percent of my usual. Every show you do deserves your respect and attention.”