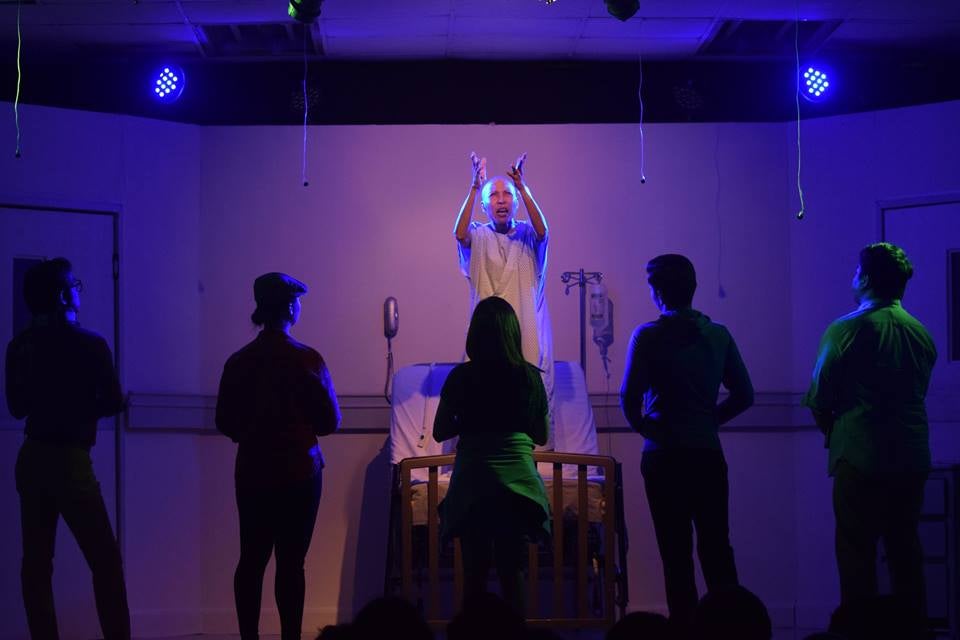 ‘Wit’ could have used more warmth

“Wit,” Twill Bill Theater’s production of Margaret Edson’s play about a courageous woman’s battle against cancer and the emptiness in her own life, was a piece that sought emphatic emotional engagement with its audience.

Like its college professor of a protagonist, Vivian Bearing (Tami Monsod), it was eloquent and articulate in presenting how life is meant to be lived, and not merely analyzed or dissected. However, unlike the lady who finds peace and touches the hearts of people in the end, this play finished on an emotional note that left us somewhat cold and, to quote a colleague’s description, frankly “underwhelming.”

The fault wasn’t in Steven Conde’s direction or in the performances. Twin Bill has hit the ball out of the park with almost all of its compact but intense productions such as “My Name Is Asher Lev” and “Dog Meets God.” The cast, especially Monsod, displayed the same ardency, baring the souls of their characters with that level of intimacy that could both be poignant and awkward.

Conde’s staging, meanwhile, was controlled, with no distracting histrionics or spectacle.

Heretical as it sounds, the flaw appears to lie in the script written by Edson, which won the 1999 Pulitzer Prize for Drama. Critics who had raved on first seeing it, as well as its screen version, which starred Emma Thompson and was directed by Mike Nichols, had accurately called it “an anti-intellectual play about intellectualism.”

A barren ivory tower life versus genuine human connection is the point that Edson browbeats the audience with over and over in the course of this play. From the very start, Bearing is established as an extremely intelligent, capable woman who has no family of her own and has lived her cloistered life in academe. Her ruthlessness scares even her smart students.

All these are reflected in her obsession with the works of 17th-century English poet John Donne, in whom she finds a kindred spirit. Donne’s famous passionate defiance against death is a foreshadowing of the ovarian cancer that would afflict Bearing. His poems would also become this emotional hermit’s rallying cry to seize each day and make it count.

What makes the play intriguing is that Bearing uses Donne’s complexity to escape and run away from life, instead of living in it. He becomes Bearing’s shield and fortress, walling her off from humanity—and woe to the smart-aleck student who dares to crack that wall by asking, “Why does he make it more complicated when it’s really simple?” That’s the classroom equivalent of calling Donne—and by extension his admirer, Bearing—an emperor with no clothes on.

Her confinement in the hospital is some form of karma coming back to haunt her. The doctors who attend to her (Raymund Concepcion, Bibo Reyes) are as brilliant and competent in their professions. But they lack the nurturing bedside manner that would have made her treatment more bearable, running tests on her as if she were a mere subject of a study. What Bearing does to her students, her physicians return to her in equal measure.

The play hammers this point of irony without any subtlety. The point is emphasized repeatedly during the 90-minute run, as the story shifts from hospital scenes in the present to flashbacks about Bearing’s exacting classroom methods. Her realization of her empty life is showcased ad nauseam, without adding any other emotional layering that would have made her more interesting and sympathetic. It is a one-note treatment of a one-note character.

Monsod, a very capable actress who has unleashed the depths of other more complicated roles in other plays, ended up with a monotonic portrayal, her emotional range limited to shifting from bitchy professor with narcissistic tendencies to lonely old woman afraid to die alone.

Even the ties she would establish with the one humane nurse she encountered, Suzie (Mikkie Bradshaw), seemed forced and hollow, with no platform of commonality or contrast by which the characters could play off each other.

Only Bradshaw’s nuanced approach and spirited performance prevented Suzie from becoming a stereotype.

There is one another humane character in the play—Vivian’s old mentor, Jason (also played by Concepcion), but his appearance at the end was almost like an afterthought. Jason had once chastised the young Vivian to ditch her walled-off life and go out into the world instead.

Conde could have highlighted this moment as a reckoning of Vivian’s missed opportunities. Only then would Jason’s visit become the symbolic last act of redemption for his former student. Instead, his goodbye became just another old friend paying his last respects to a dying colleague.

We would have wanted to respond more enthusiastically to this play and its committedly acted ruminations on life and mortality. But, in either wit or pathos, it felt as distant as Vivian Bearing in her prime.—CONTRIBUTED