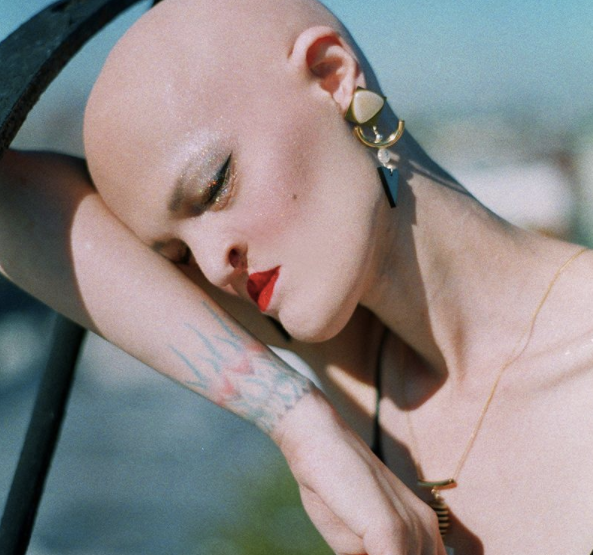 In an industry which has been slammed for promoting unrealistic standards of beauty, this model with a genetic disorder stands out.

Melanie Gaydos has some of the most otherworldly and striking photos in fashion, and she would argue it’s because “there’s no one like me,” as quoted in a Galore interview.

She believes her photos have a “psychological element” to them, and while she says never felt beautiful nor ugly, she wouldn’t choose another body. “My body is a vehicle, is a tool to get through life,” she told Galore.

Gaydos was born with ectodermal dysplasia which causes “defects in the hair, nails, sweat glands, and teeth,” according to the National Foundation for Ectodermal Dysplasias.

This gave her a unique look which she uses to differentiate herself in the fashion industry. But this only came after surviving traumatic experiences because of her appearance.

She grew up in an abusive home, with not much of a relationship with her mother. Children would be afraid of her on the playground, and with the few friends she had, she felt they were ashamed of her. She would also wear all types of wigs to help her fit in, and prior to modeling, wouldn’t allow people to take her photos unless “they understood me,” she revealed to The What’s Underneath Project.

Still, she kept an optimistic outlook, and as an art student in college, was approached by photographers who wanted “unique” subjects.

In interviews, she shows a sweet and upbeat personality. This may have helped her land her first major gig in a music video after writing a letter with “hearts and smileys” to photographer Eugenio Recuenco. From there, she caught international photographers’ attention.

Gaydos still feels upset when she faces discrimination within and outside of the fashion industry. But she’s learned to understand that if people judge her, it is a reflection of their personality and they are projecting insecurities on her.

Modeling is when she’s happiest and calls it “therapeutic” as it is her “time to be completely open.” And amidst everything, her ultimate dream is to become “the best mother I could be.” Niña V. Guno/JB

LOOK: Black model flaunts beautiful skin despite being told to bleach it

This Model Was Told Her 24-Inch Waist Was ‘Too Big’