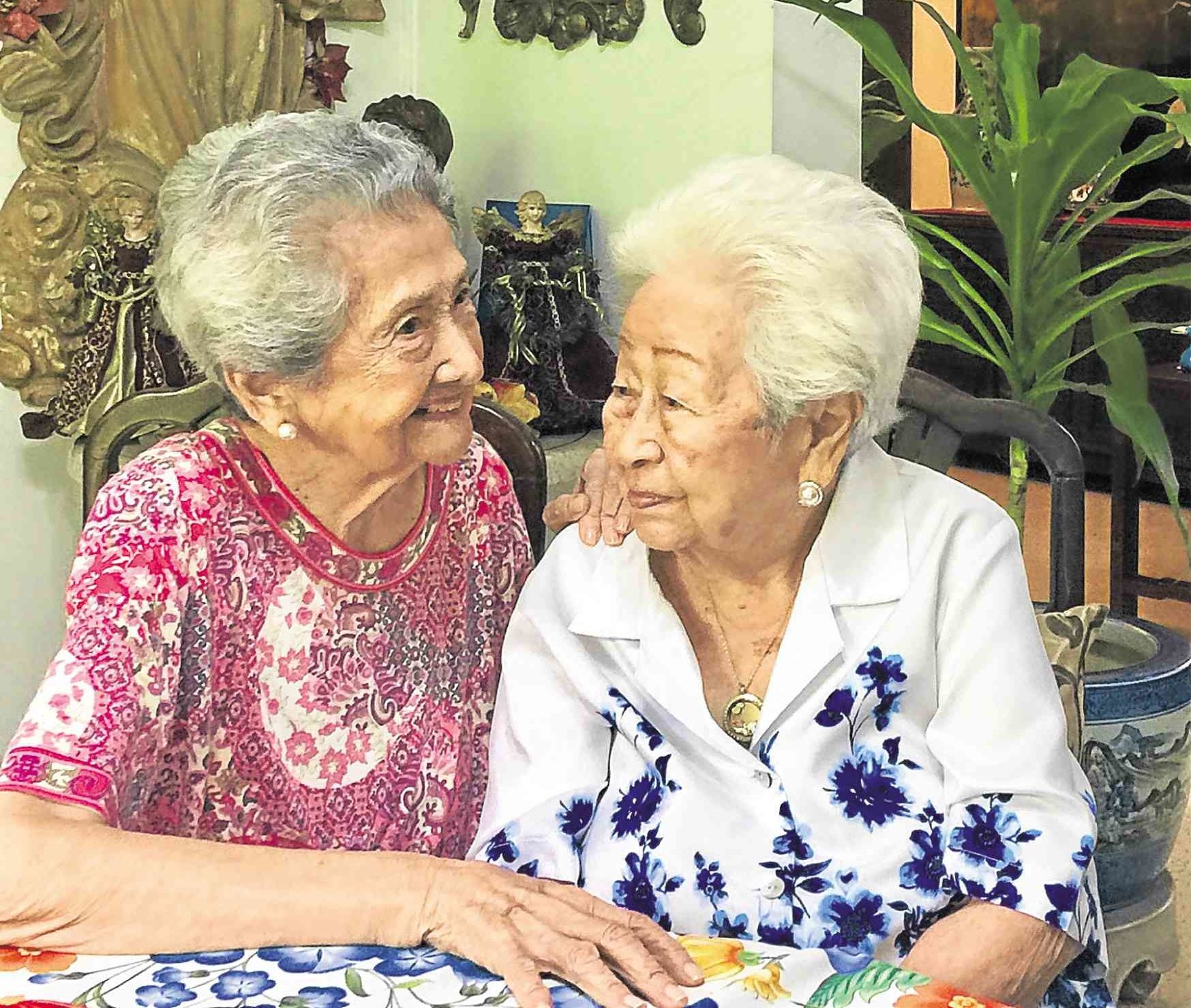 When I ask them what their secret to a long, healthy and happy life is, Tining quips: ‘Mahjong!’

If there’s anyone who can claim ownership to the term BFF (Best Friends Forever), that would be Carmen (Nena) Consing La’O, age 101, and Cristina (Tining) Aberasturi Lopez, 97. Their amazing friendship, which now spans three generations, just marked its 80th year.

Nena was 20, and Tining, 18, when they met in Tacloban in 1937. Nena’s father, Lope Consing, was a judge, while Tining’s father, who was Basque, had been assigned to work for the Escaños.

“We both spoke Spanish, so that’s what drew us together. Her family was very kind to my family, and Nena was always nice to me, very mabait. She was so intelligent!” says Tining, still bright-eyed and animated.

Tining is clearly the more vocal and affectionate, while Nena sits next to her, smiling and listening intently. One grandchild says that perhaps the secret to their long-lasting friendship is that “Tita Tining loves to tell stories, and Mama Nena loves to listen.”

After a year in Tacloban, Nena moved to Manila where she finished Medicine at the University of Santo Tomas. There she met her future husband, Julian La’O Jr., then a law student.

They returned to Cadiz in 1941 to wed in her parents’ farm, before going back to Manila. When the war broke out, they sought shelter in the family farm in Negros.

Tining had also left Tacloban. In a fiesta in Dumaguete she met the man she would marry. Cesar (Cesing) Lopez Sr. was not keen on going to the fiesta that day, but his good friend, Charlie Ledesma, convinced him.

And that was how he first laid eyes on the beautiful Tining, whom he pursued relentlessly.

Tining had several suitors. When we ask her why she chose Cesing, she says she asked Our Lady for discernment. “Some prayers, God answers right away. And you may not believe me, but I was in church one afternoon, kneeling and praying so hard for her to tell me who I should marry. My eyes were closed tight when, all of a sudden, a voice in my head said, ‘Ese! Ese! Ese!’ (That one! That one! That one!) So I opened my eyes and, to my great shock, it was Cesing walking toward me after receiving Holy Communion!”

Family to each other

When Cesing and Tining married, he brought his young bride back to his family’s farm in Cadiz. Nena’s family also had a farm right next door.

“I was overjoyed to discover that Nena was in Cadiz, too!,” says Tining. “I came to Cadiz with no friends, and I did not speak the dialect. I did not know anyone else except my husband and in-laws. Finding Nena again made me very happy! From then on we became the best of friends. I would turn to her for everything because she seemed to know all the answers, because she was a doctor. I did not know a thing, especially when it came to the children.”

Soon the babies arrived in succession. Tining and Cesing had seven, while Nena and Julianing had six. Their children were all born in the same years and only months apart.

Eventually, the respective husbands of Nena and Tining became the best of friends, too. It was a bond that would remain to the end of their lives.

The La’O and Lopez children grew up together like one family. As Carmi says, “We really are family to each other.”

When I ask them what their secret to a long, healthy and happy life is, Tining quips: “Mahjong!”

From their early days in Cadiz, the two best friends have been playing regularly—daily in their younger years, but now three to four times a week, depending on their mood and health.

Mahjong is said to keep the mind sharp and agile. Nena and Tining are living proof of that. “But we play only for fun and never for the pot,” adds Tining.

After World War II, Nena and her family moved back to Manila where, to this day, they live in the ancestral home in Paco. Tining lives with her family in an upscale village in Makati.

Both women are surrounded by family, a strong support system, and days filled with social activities and interaction—all crucial to living a healthy life and keeping a sharp mind.

How have they lasted as best friends this long? “We never had long disagreements,” says Tining. “If there was something we did not agree upon, we would talk about it right away.”

At her 101st birthday party recently, Nena sat quietly with her caregivers, acknowledging with a smile or a nod the guests who would arrive. It was only when Tining walked into the room that Nena’s eyes lit up.

From across the room, the two waved at each other like a pair of schoolgirls. And in that moment, it was like 80 years had not passed, and they were 18 and 21 once more.